The shot is a favorite among bar patrons in Lebanon, but its exact origins remain a mystery. L’Orient Today set out to exhume this elusive history, and discovered a savory mix of rumor and urban legend, as told by Beirut’s most grizzled bartenders. 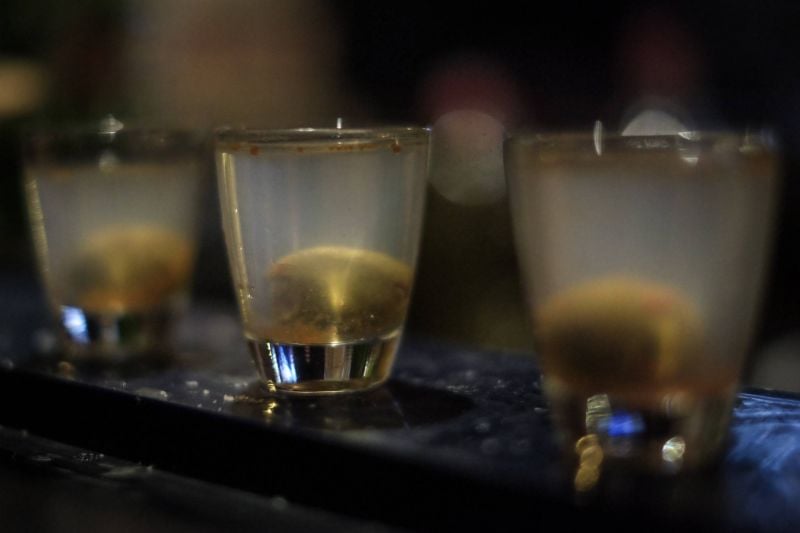 A line of doudou shots sit stacked on a bar in Beirut. (Credit: João Sousa/L'Orient Today)

BEIRUT — A splash of lemon, a dash of Tabasco, chilled vodka, and an olive to top it off.

Though mixed in different proportions depending on the bar, these are the long-established ingredients of Beirut’s famed doudou shot.

Unique to Beirut and virtually unheard of beyond Lebanon, the doudou shot has been adopted as a cornerstone of the local bar scene. Despite its cult status, there’s no consensus on when or where the shot was first poured.

L’Orient Today set out to solve this local mystery and began at the only logical starting point: the bar that’s stood resolute for decades, where time seems to cease. 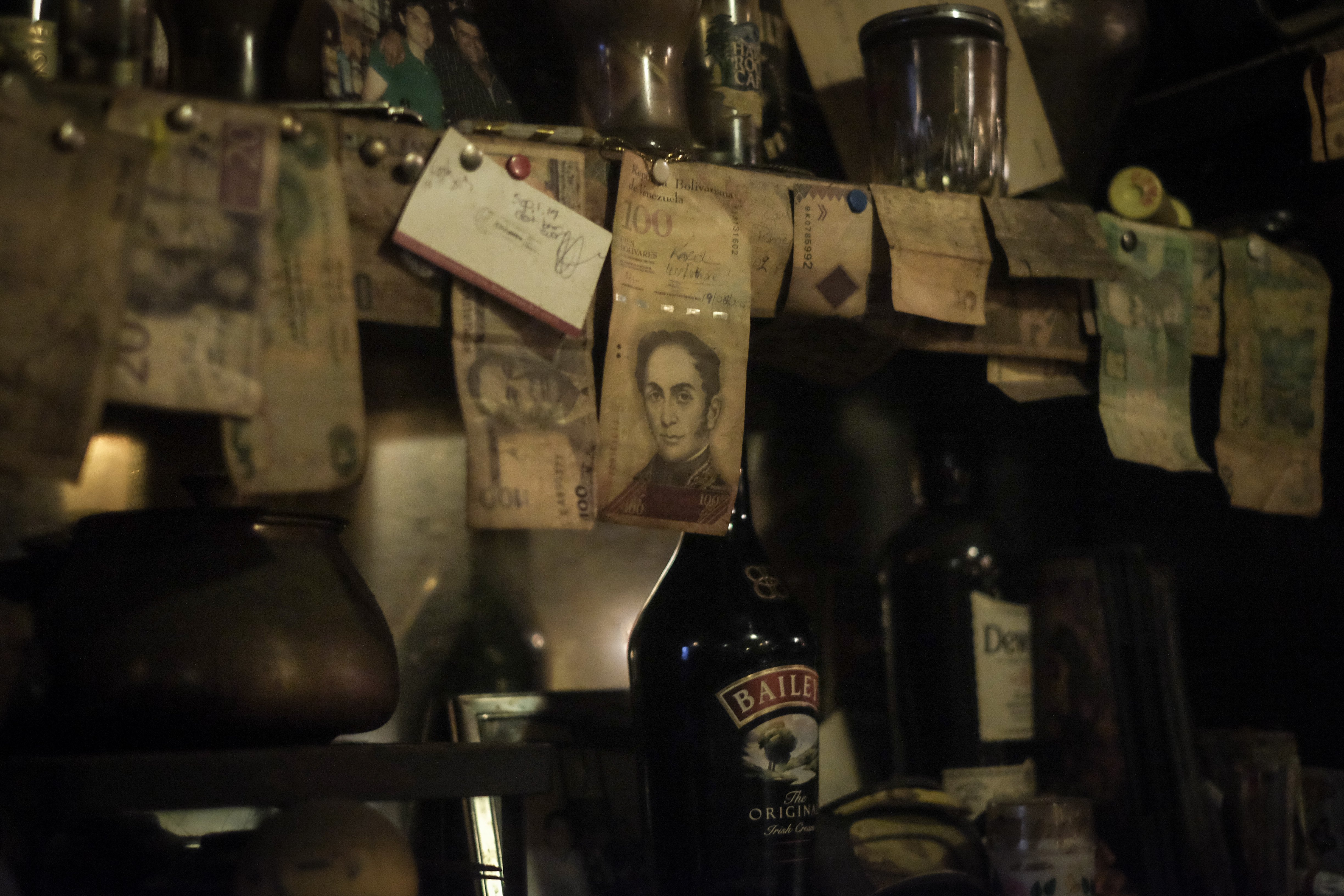 The liquor shelf at Captain's Cabin, a bar established in Hamra in 1964. (Credit: João Sousa/L'Orient Today)

At 10 p.m. on a Saturday, only three patrons sit at the bar of Captain’s Cabin in Hamra. Fleetwood Mac plays over the speaker, but not loud enough to cover the crack of pool balls at the billiards table.

The shelves are filled with dusty liquor bottles, assorted figurines and a handful of faded suede pilot caps — a nod to the airline captains who used to frequent the bar, thus the name.

Behind the bar, wearing a short-sleeved striped collared shirt and a quiet smile, stands André Toriz. He’s been standing there for 25 years

“Time freezes here,” says Malik, one of the only patrons at the bar at this hour. “Everything outside changes, but this stays the same.”

André’s brow furrows slightly. “Well, a few years ago I changed the tables in the middle there.” He gestures to a set of wooden tables a shade lighter than the rest. “See? They’re new.”

If anyone could offer clues on when or where doudou originated, it would be André. But when asked about the origins of the legendary shot, he offers a shrug. 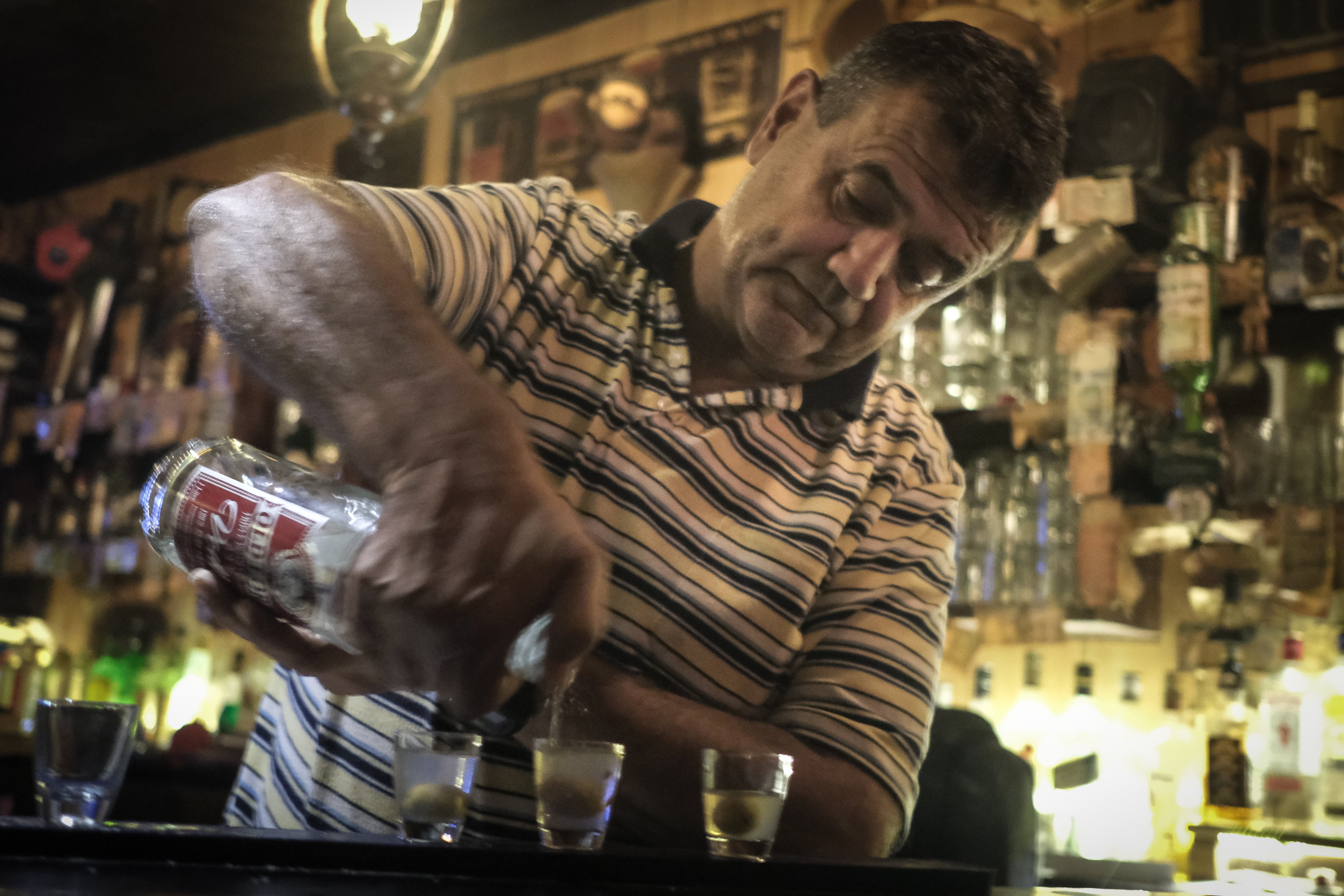 Still, André does know a thing or two about how the shot ought to be prepared. As he lines up shot glasses along the edge of the bar, he shares what he says is the secret to superior doudou.

“The olive has to be very bitter,” he explains, spooning an olive from a repurposed Nescafé jar. “Some use sweet olives, but that doesn’t work. It has to be very strong.”

With expert nonchalance, André builds the shots using his homemade olives, fresh lemon juice, rail vodka and a shake of Tabasco. The hot sauce, he explains, has become the most expensive part of the cocktail.

Returning to doudou’s origins, André offers a suggestion: “Go ask the guy at Evergreen. Calls himself Amigo. He says it was him.”

A few blocks away, the soft glow of green fairy lights offers the only sign of life on an otherwise unlit street. Evergreen is a fraction of the size of Captain’s, with just enough room for barstools and a handful of tables. Here, too, are dusty liquor bottles and names scribbled on the wall on the permanent marker. The ceiling is punctured with rolled scraps of paper.

“Wishes,” explains Amigo with a wink.

He darts around behind the bar, laughing and sparring with customers in a mix of Arabic and heavily Italian-accented English. He says he’s been tending bar for 29 years. When asked his real name, he proudly declares:

“My name is Amigo and my family name is Evergreen!” 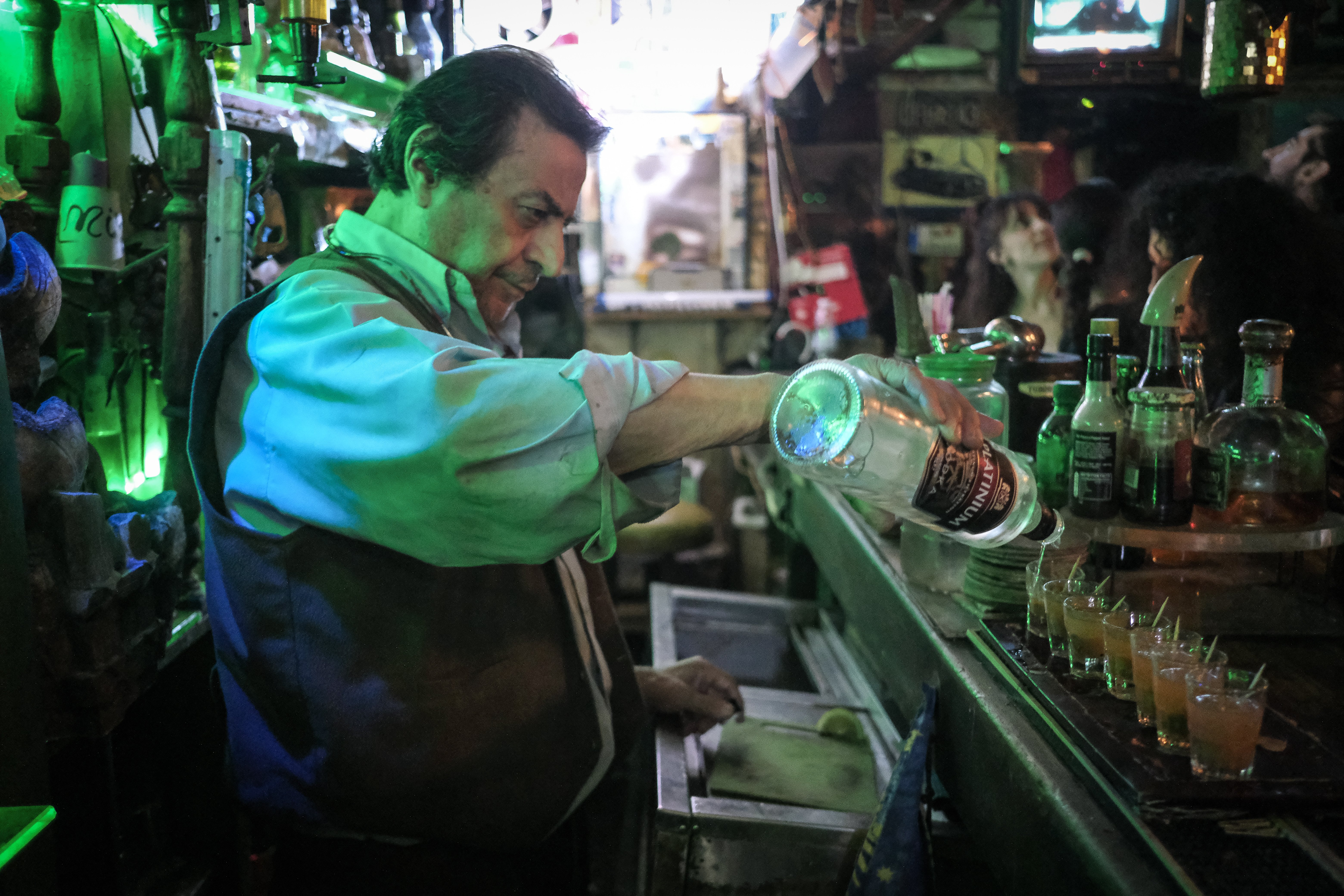 "My mother poured me in the bottle," says Amigo, as he prepares a line of doudou shots. (Credit: João Sousa/L'Orient Today)

“You mean the Zaituna shot??”

He grabs a handful of shot glasses and begins to build the drinks, though his olive — zaituna in Arabic — is impaled on a toothpick rather than dropped in the glass. When one patron tries to eat the olive before taking the shot, Amigo is quick to scold.

“Shot first. Olive after. Why? Because the sky is too high!” he says with a wild laugh.

But where did the shots come from?

Amigo taps the side of his head with his middle finger. “Min beli.” (“From my mind.”)

From the shelf behind him, Amigo produces a book titled على أراضي جمهوريتي (“On The Grounds Of My Republic”). Flipping to the middle of the book, he points to the center of the page where the words “doudou shot” stand out from the Arabic script. He seems to offer the book as unequivocal proof that he is the inventor of the shot, but a peek at the cover page shows the book was published in 2016.

The doudou is much older. 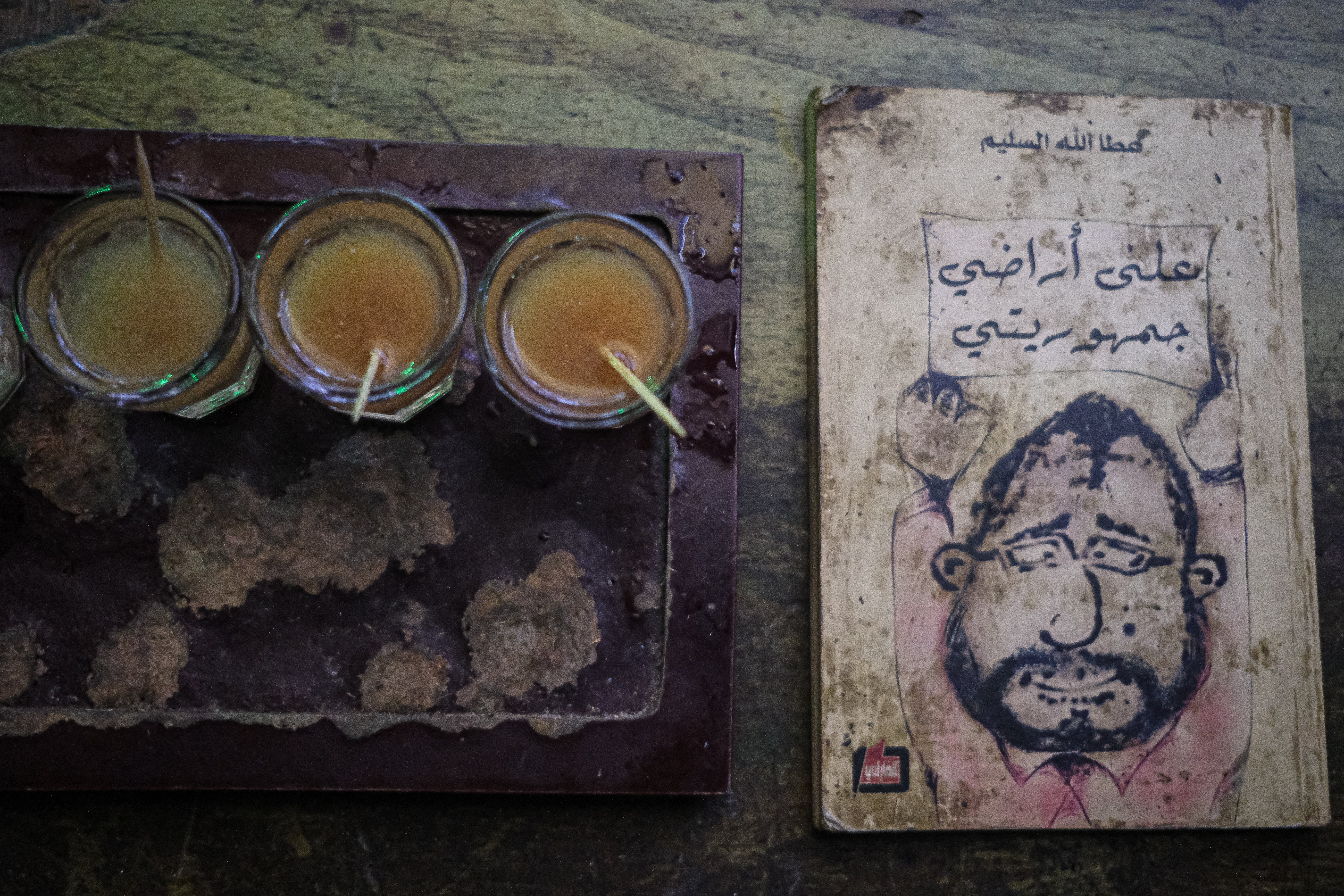 Amigo isn’t Beirut’s only bartender to claim responsibility for doudou’s creation. To get another perspective, L’Orient Today spoke with Hisham Anise, the owner of Anise cocktail lounge in Mar Mikhael and a bartender with 26 years of experience.

“It’s a stupid and simple shot,” Hisham says of doudou. “That’s why it caught on.”

Hisham is a former employee of the Lila Braun, a long-defunct bar on Monot Street, where he says the shot originated. Hisham joined as a bartender in 2002, when he says customers were already asking for the shot by name.

“Lila Braun was a magic place,” says Hisham. “The best place that ever existed in Beirut. Somewhere between a bar and a club.”

In the early 2000s, Monot was the latest hub of Beirut’s migratory post-war bar scene. Lila Braun’s owners also owned Pacifico just across the street. Former patrons say both bars were usually filled with expats or Lebanese consultants who worked in the Gulf. Unable to drink in their countries of employment, they would fly back to Beirut on the weekends, often taking taxis directly from the airport to Monot’s bar district. 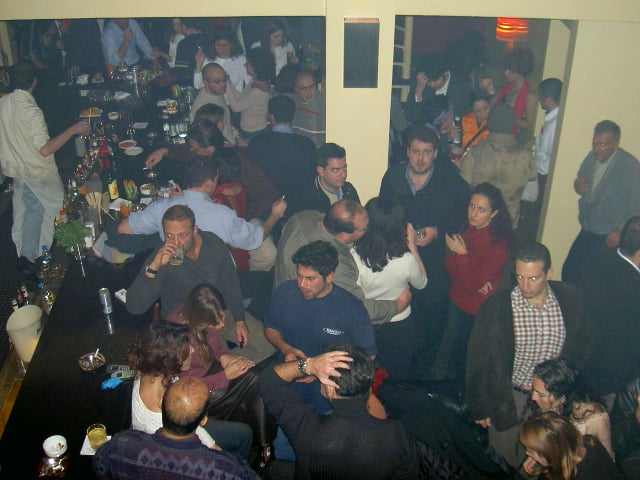 The interior of Lila Braun circa 2002, where the doudou shot is rumored to have been invented. (Credit: Courtesy of Mark Mouracade)

Both Lila Braun and Pacifico were forced to close in 2005 due to mass protests downtown. Pacifico later reopened further up Monot Street, where it remains today. Lila Braun reopened in 2007, but wasn’t able to recapture its former magic, according to Hisham. It shut permanently approximately one year later.

Hisham remembers doudou, or “the olive shot,” was already wildly popular in the early 2000s, but doesn’t claim responsibility for himself. The credit, he heard, belongs to the former bar manager of Lila Braun — a man by the name of Abboud.

“Word is, Abboud came out with the shot,” says Hisham. “You should go talk to him.”

The father of doudou?

As it happens, Abboud Kayan still slings drinks in Beirut. He’s now the owner and bar manager of Santana, in Sodeco. On this same Saturday night, he’s naturally behind the bar.

The atmosphere at Santana is a noticeable departure from that of Captain’s Cabin or Evergreen. For starters, it’s well-lit. The sharp-dressed customers sip martinis and smoke cigars.

Abboud himself sports a crisp button-down shirt and a freshly-trimmed beard. When L’Orient Today tells him he is the rumored father of doudou, a smile spreads across his face.

“I created it as the ‘olive shot,’” Abboud says. “It is still in the computer system here as ‘olive shot.’” 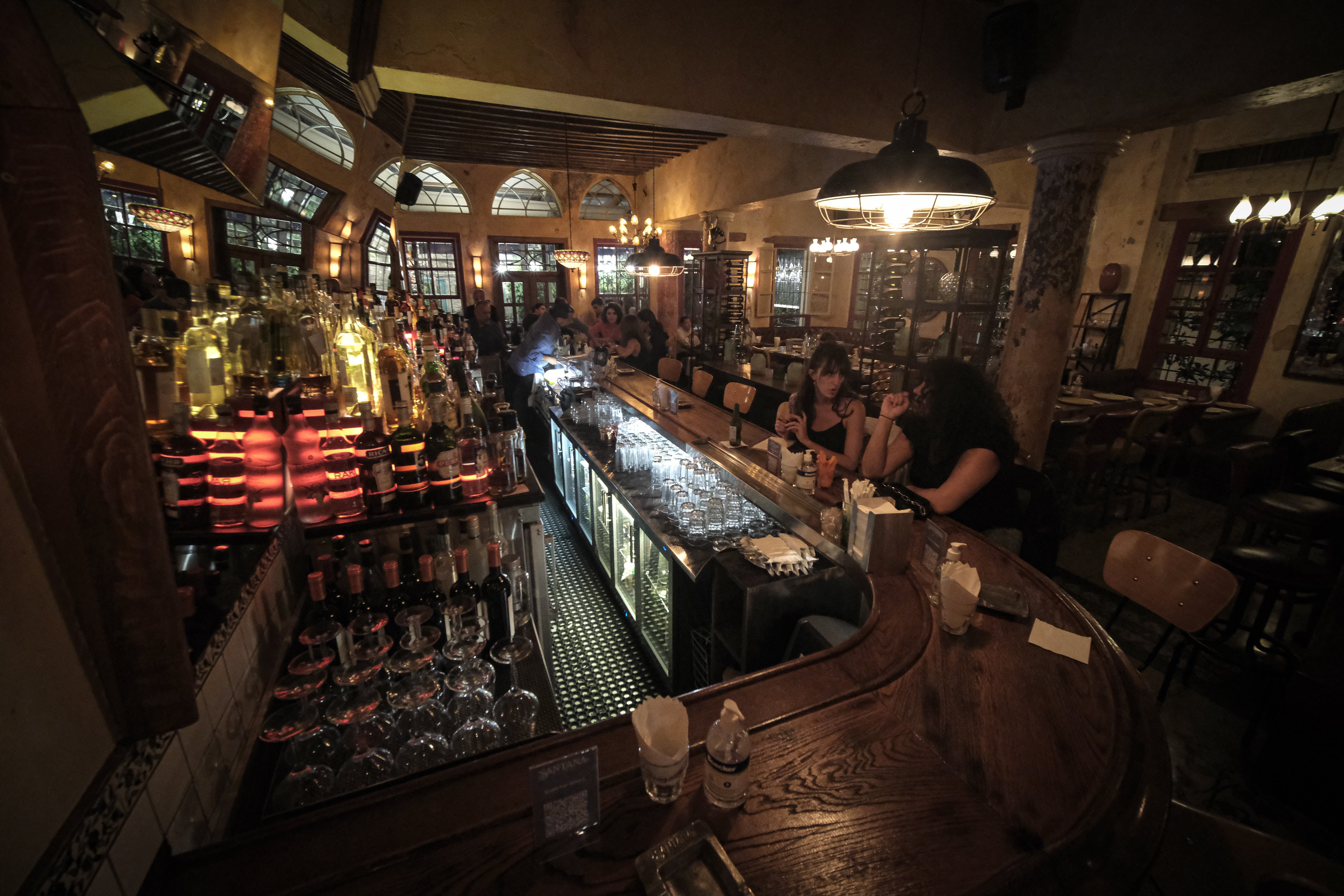 The interior of Santana, a chic cocktail lounge in Sodeco owned by Abboud Kayan, the rumored father of doudou. (Credit: João Sousa/L'Orient Today)

Abboud says he created doudou back in 2001 or 2002, though the exact year eludes him. Three separate former employees of Lila Braun later confirmed to L’Orient Today that doudou started there in the early 2000s, under the auspices of Abboud.

He says he doesn’t know where the name “doudou,” comes from, but that it likely originated with the customers.

Sure enough, one of Lila Braun’s former employees — Bachir Khairallah — remembers a well-off customer who used to frequent the bar and always paid in dollars. As Bachir remembers it, this customer favored Abboud’s olive shot while his insistence on dollars earned him the nickname “doudou.”

Somewhere in the drunken haze, the name slid from the customer to the shot. 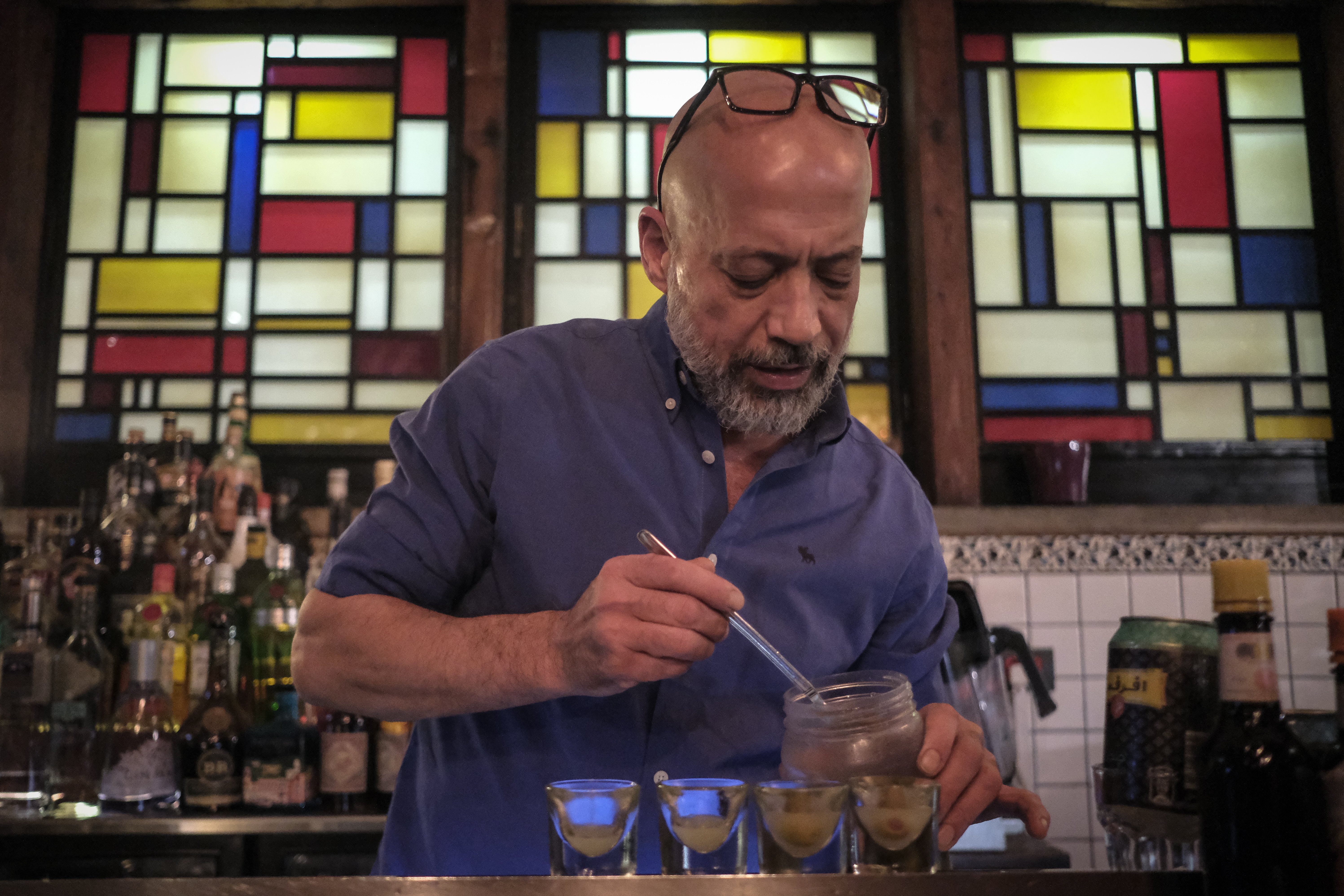 Abboud Kayan, who seems to hold the strongest claim to invention of the doudou shot, spoons olives at Santana, in Sodeco. (Credit: Courtesy of Mark Mouracade)

When asked for a demonstration, Abboud is more than happy to oblige.

He pulls a handful of chilled shot glasses from the freezer and, like all others, begins to build the shot directly in the glass. First, a splash of freshly squeezed lemon juice, followed directly by the olive.

Abboud pauses at this step, making eye contact to emphasize its significance, then spoons a few drops of olive juice into the glasses.

“This is very, very important,” he says of the olive juice. “A lot of people get this wrong.”

Next comes the dash of Tabasco (“It must be Tabasco”) and, finally, the chilled rail vodka.

BEIRUT — A splash of lemon, a dash of Tabasco, chilled vodka, and an olive to top it off.Though mixed in different proportions depending on the bar, these are the long-established ingredients of Beirut’s famed doudou shot.Unique to Beirut and virtually unheard of beyond Lebanon, the doudou shot has been adopted as a cornerstone of the local bar scene. Despite its cult status, there’s no...