Albert Mansour, master of the oud

Embroiderers, shoemakers, ironworkers, watchmakers, oud makers, carpenters, potters, restorers and tanners. What they have in common is “the intelligence of the hand” as they carry on ancient traditions they inherited from their forefathers.

In this series, you will find portraits of these women and men that the Ready Hand initiative seeks to identify. Today we meet Albert Mansour, a traditional oud maker. 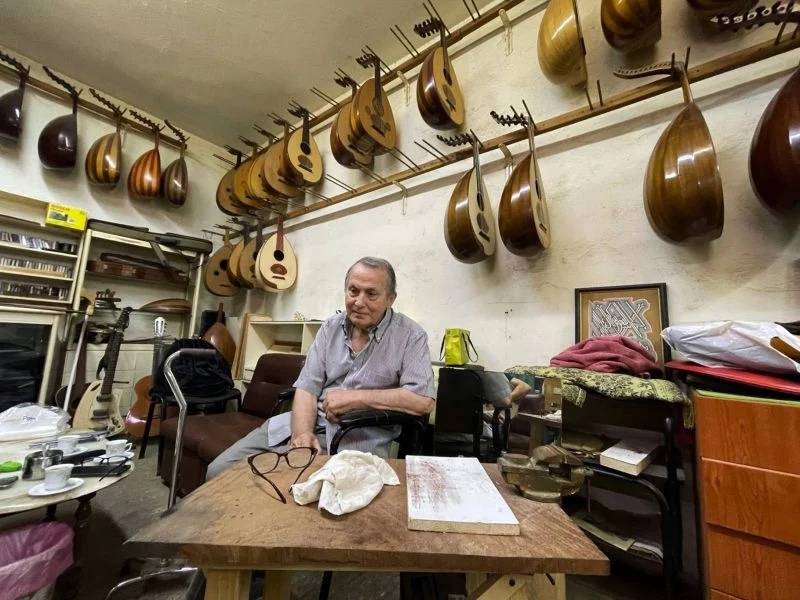 Oud maker Albert Mansour says he cherishes each instrument as if it were one of his children. (Credit: Carla Henoud/L'Orient-Le Jour)

He works with his senses and his heart, observes, listens, touches and builds ouds as others would build cathedrals. Albert Mansour cherishes his instruments as much as the children he never had, whispering beautiful stories to them before reluctantly parting with each one.

Mr. Albert, also called muallem or ammo by most people who know him, is the humble master of many musicians who come to him to repair, refine or recover their instruments, retuning them or simply share a moment of music between friends.

On this autumn morning, Mansour waits for us in his basement workshop in the Beirut neighborhood of Moseitbeh, surrounded by his assistant, Jammal, and musician-archivist Oussama Abdelfattah.

Read more from this series:

As we walk down the large steps leading to his den, a bewitching music emanates from Abdelfattah’s perfectly adjusted instrument.

We almost feel like intruders, interrupting an intimate and sacred moment, but the host of the shop welcomes us with an elegance and warmth that already push us to call him ammo, or “uncle.” 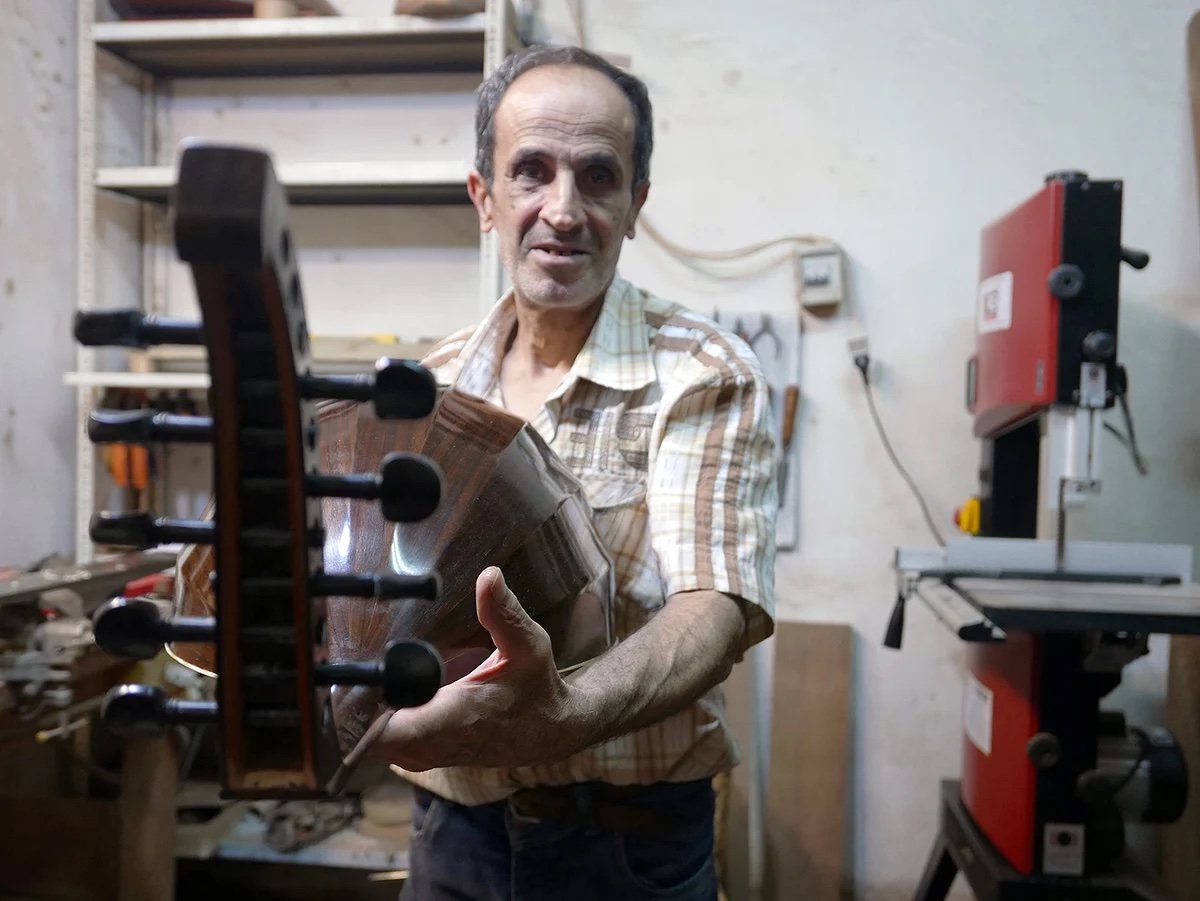 Standing, leaning on his cane, slightly bent, he proudly narrates his 82 years, including the last four during which he stopped singing.

“I had a stroke that deprived me of the two most essential things for me,” he says. “My left hand and my voice.”

He now offers himself to sharpen “again, always” the craftsmanship oud making.

He goes into every manufacturing-related detail to make this instrument lighter, more ergonomic, the sound softer, more precise, the position of the musician and their fingers more comfortable.

Throughout the workshop, ouds of different shapes and colors hang from the wall like trophies.

Music cassettes from the 1980s and an old record player sit on the table next to a hastily prepared rakweh of coffee.

Things exist in an orderly fashion: Albert Mansour watches over the workshop with his precise and tender gaze, and an alert ear.

Just next door, there is an oud repair and making workshop run by Jammal and an assistant.

With his fingers worn down by time, he delicately caresses the wood of each oud, files it down, varnishes it and presents it to Albert. 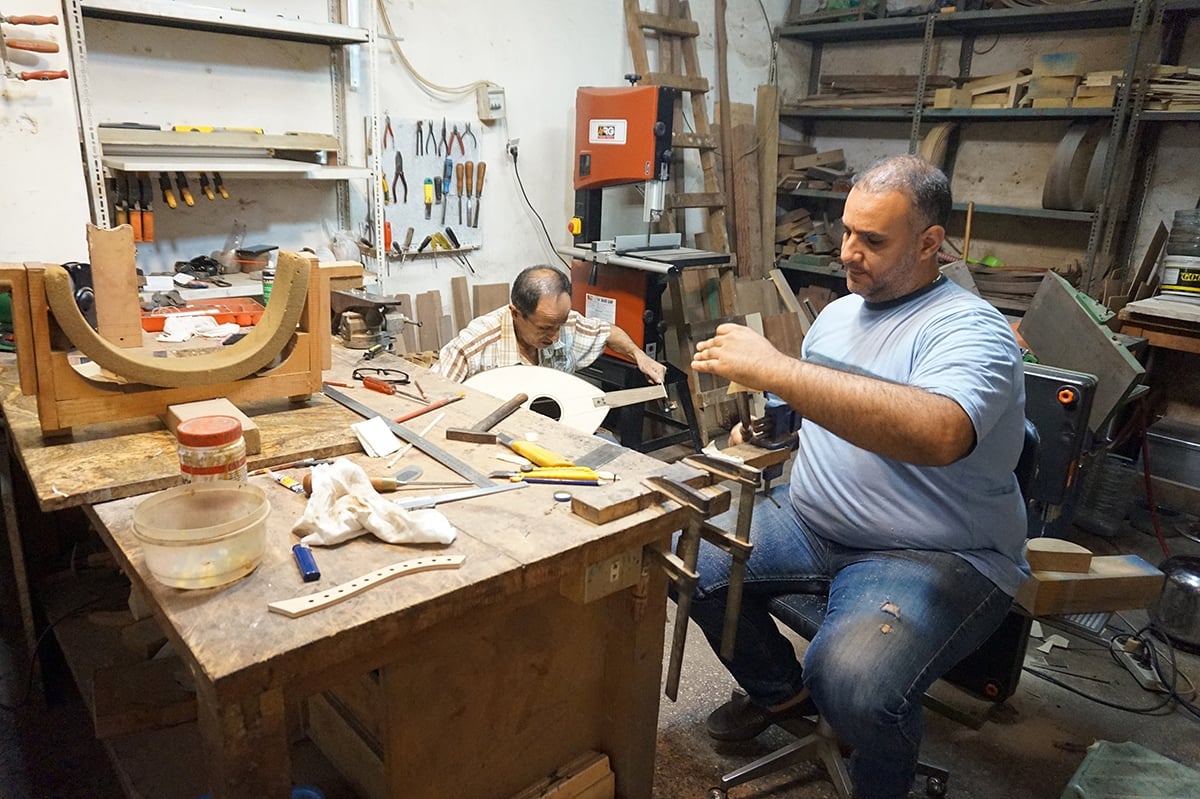 In search of the perfect sound

Formerly a mechanical engineer, Mansour left his garage and the noise of the engines to immerse himself instead entirely in the world of ouds.

Cars have long intrigued him, but “music and singing have always been my first passion,” he says, referring to the ouds as his “children.”

Accompanied by his oud and a voice that had already conquered a large audience, he once performed on television and radio. As the story goes, one day while Mansour was rehearsing and repairing instruments in his garden, his neighbor, the famous Lebanese singer Marcel Khalifeh, spotted him and encouraged him to pursue a music career.

So Mansour decided to set up a full-time workshop. This is the one he still runs today, and where he can no longer count the hours spent working.

“Every day, after work hours [at the garage], I would leave my garage and come here. Sometimes I would stay until morning.” 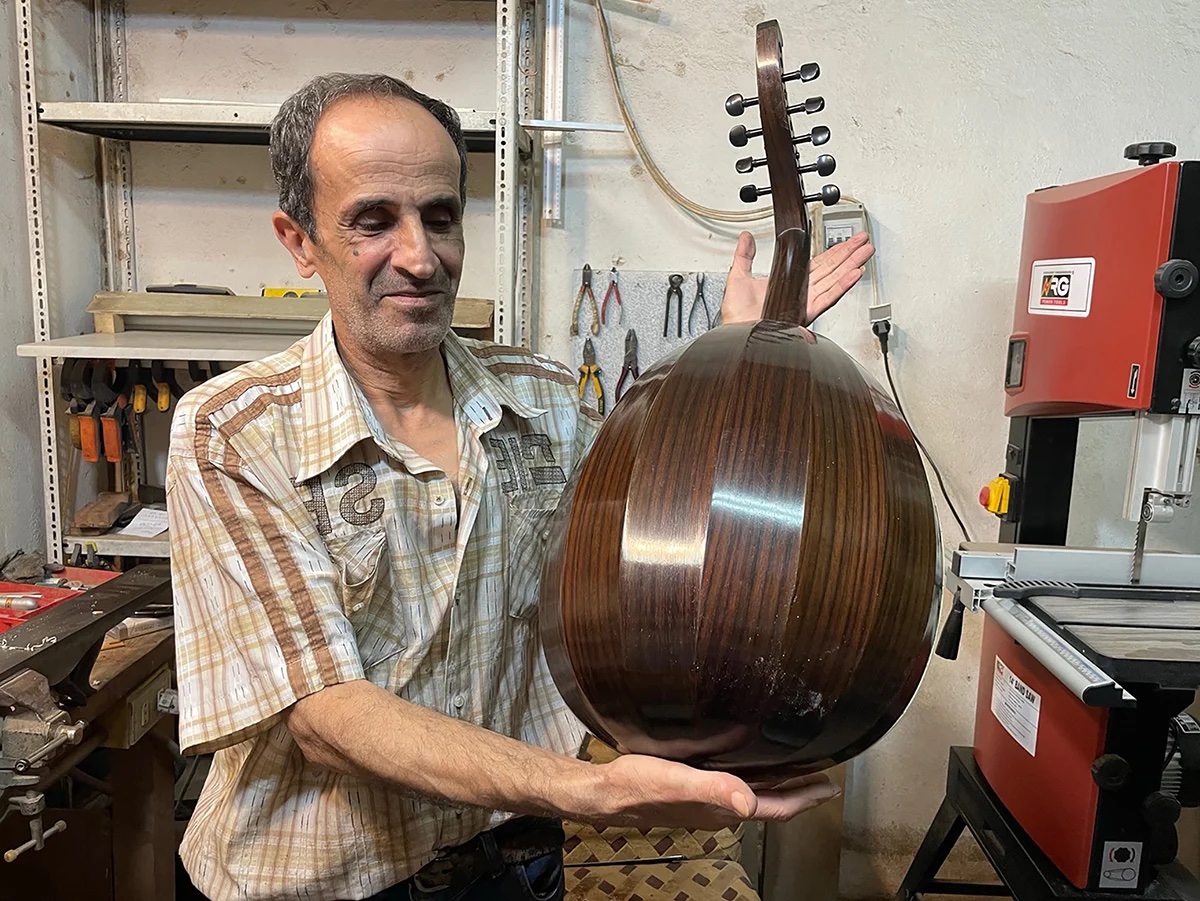 It’s in this same workshop that, some 35 years later, Mansour continues his quest for the perfect sound. It is necessary, he thinks, “for the ear to be astonished and startled.”

In that quest, Mansour “modified the shape of the oud,” says musician Oussama Abdelfattah.

He enlarged the resonance box and changed the shape, because the oud’s body must be stable, according to Abdelfattah. “What brings us here? It is him, ammo Albert ... He creates with his soul and with rare accuracy. He has a perfect knowledge of his craft, an ear and a sharp technique. You just have to listen to the music that comes out of his instruments. It resembles him. He is a simple, true being, as bright as the sun.”

While the musician performs, armed with the advice of muallem Albert, the latter, a slight smile on his lips, said, “If you love your instrument, it loves you back. If you treat it well, it reciprocates.”

It takes him two months to finish making each oud, he says. “I used to work alone,” he said. With each “departure,” each separation, the oud maker hugs his instrument, caresses it and then gives it up.

“They are all my babies, they have embellished my life, even if it was already beautiful.”

He works with his senses and his heart, observes, listens, touches and builds ouds as others would build cathedrals. Albert Mansour cherishes his instruments as much as the children he never had, whispering beautiful stories to them before reluctantly parting with each one.Mr. Albert, also called muallem or ammo by most people who know him, is the humble master of many musicians who come to him...