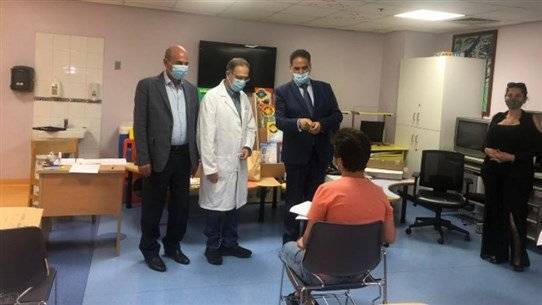 BEIRUT — Families celebrated their children’s success in the county's Brevet exams Thursday. L’Orient Today’s correspondent in the North reported that Akkar residents lit fireworks and discharged firearms in the air. What goes up must come down.

Those who pass the Brevet receive state diplomas certifying the completion of middle school. Ninth-grade students sat for their exams in late June after more than two years of COVID-19-fuelled interruptions. To ease the examination procedure, some mitigating measures were put in place — hoping to offset the years of deepening, multifaceted crisis, complicated by the coronavirus pandemic. L’Orient Today spoke to elementary school teachers and students to hear their, sometimes conflicting, assessments of the amended procedure, and their possible consequences.

As part of the Education Ministry’s mitigation measures for official exams, students had to sit in for five of the usual nine official exams. It was mandatory for students to take mathematics as well as two language exams — Arabic and English/French. In addition, students were given the option to choose two exams they wished to sit from two groups: Sciences — Chemistry, Biology and Physics — and Humanities — Geography, History and Civics.

To put this into perspective, one student could take the following exams: Math, Arabic, English, Chemistry, and History. Students were also able to finish the five exams in only two days, instead of the usual four days.

The amendments didn’t impact the overall success rate of this year’s Brevet exams (standing at 80 percent, according to the Education Ministry), as success rates prior to the crisis — 2018-19 school year and earlier — ranged between 75 and 80 percent.

‘Tenth grade will not be a piece of cake’

Ghassan Doulani, a middle school biology teacher, criticized the ministry’s decision to reduce the number of exams, saying “it did more harm than good.” The Education Ministry, he elaborated, cut full units from the curriculum instead of canceling some chapters.

“For example, in Physics,” he said, “teachers had to give the unit about electricity where units teaching optics and mechanics were completely canceled.”

Doulani, who teaches at Burj al-Barajneh public school, added that “tenth grade is not going to be a piece of cake” for these students. He pointed out that it will be difficult for students to move up to tenth grade without studying these essential subjects.

“Some submitted almost blank papers” for their end-of-year exams, he added.

This is because the usual regulation rules that, if a student fails his final year school exams but passes his official exams, the student is considered to have completed his middle school education.

For her part, Manal Hdaife, the principal of Kamal Jumblatt public school in Mokhtara, Chouf, argued that since the decision to reduce the number of subjects was announced later in the school year — May 15th — students were compelled to study for all nine subjects throughout the school year.

Moreover, the Education Ministry reversed a decision to include school exam grades in the final official average grade after it “learned that some public and private schools handled the issue irresponsibly.”

Hdaife defended the new procedure, saying that there has been a lack of crucial revision to the Lebanese school curriculum.

“Students choosing what they want to study in middle school,” she said, “is something we need to introduce to our outdated school system.”

Brevet student Youssef Yahya, 14, who passed his official exams and celebrated with his friends, told L’Orient Today that taking fewer exams meant that students were left with fewer chances to make it up if they failed some exams.

“If one fails some subjects,” he added, “he can’t depend on other subjects to get an overall passing grade.”

Due to soaring tuition fees at some private schools in Lebanon, induced by the currency crisis, Yahya had to move from a private to public school this year. He said that he struggled at the beginning of the school year because public school instructors went on many strikes.

Yahya told L’Orient Today that due to strike actions he missed around three months of school, during which students were being told what to study via WhatsApp. He added that reducing the number of official exams was efficient when considering the fact that students missed out on a substantial amount of study materials during the school year.

The education sector, among others sectors, has been hit hard by Lebanon’s severe fuel price hikes. According to the spokesperson of Education Minister Abbas Halabi, some 90 USD were allocated to each public school teacher as a monthly incentive to cover their transportation costs and to encourage them to attend school.

The incentive comes from a fund unveiled by the World Bank and its partners in December 2021. Some $37 million were repurposed to help Lebanon's public school teachers.

The spokesperson added that 18 USD will be paid for each teacher for every day they helped monitor students taking the official exams. This is on top of doubling their original payment in Lebanese lira.

Both Doulani and Hdaife told L’Orient Today that many teachers have yet to be paid some of their monthly compensation. This is because of a system malfunction, in which school principals had to forward teachers’ attendance to the ministry, according to Hdaife.

“Because of internet issues,” she said, “some attendance wasn’t received by the ministry and so the teachers weren’t paid.”

Hdaife added that another issue is that the monetary incentives — whether the 90 USD or 18 USD — are paid by exchanging the money at the central bank’s Sayrafa exchange platform. As per past convention, compensation for monitoring official exams will not be dispersed until December 2022.

BEIRUT — Families celebrated their children’s success in the county's Brevet exams Thursday. L’Orient Today’s correspondent in the North reported that Akkar residents lit fireworks and discharged firearms in the air. What goes up must come down.Those who pass the Brevet receive state diplomas certifying the completion of middle school. Ninth-grade students sat for their exams in late...