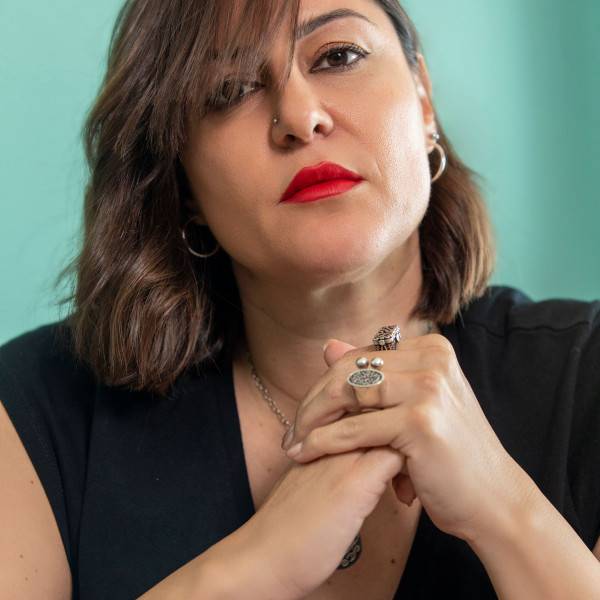 BEIRUT — “I don’t want to be known as *that* poet, you know? The traumatized one,” Zeina Hashem Beck tells L’Orient Today with a chuckle from California, where she moved to from Dubai about six months ago. Although she has only started her day, and the time difference is about eight hours, her electric energy easily outdoes that of the interviewer. “I just want to write about my experiences,” she adds.

In the transcription summary of the interview, the following keywords pop up: Lebanon, writing, feel, Arabic, poem, duets, diaspora, reader, Beirut, daughter, friends, language, mom. Befittingly, these words are also the main themes that can be discerned in her latest collection. And Hashem Beck’s life.

While, ostensibly, the conversation was about her latest book O, which is named for life’s cyclicality, it also ranged into other topics, like what it means to be in your forties in this day and age, the process of finally growing into your mind and body, and, of course, Lebanon.

Hashem Beck grew up in Tripoli, which was long known to outsiders as the poorest city in Lebanon, but which during the Oct. 17 uprisings in 2019 was baptized “the bride of the revolution.” But, like many Lebanese, she hasn’t lived in her homeland for quite some time now, having moved to Dubai 10 years ago.

It took her a while to adjust to life in California, especially getting used to the time difference – most of her friends and family are in Dubai and Lebanon, so her days are their nights and vice versa. “The first few months, most of my mornings and afternoons were about catching up with my friends and family abroad, but at a certain point I had to stop myself, saying no, no, no, Zeina, exist where you actually are.”

This adagio shines through in O – although some themes can be recognized, the collection mostly feels like a spontaneous stroll through Hashem-Beck’s mind. You can almost picture her sitting in certain places while conjuring up her poems: looking at her daughters, almost bursting with love and worry; at the airport where the whole family embarks on the next adventure; sitting in her lit up garden at night, reminiscing about the past; or just drifting away for a moment while dancing with her friends on a night out.

This doesn’t mean that all poems are lighthearted — they decidedly are not. In fact, Hashem Beck said she spent quite some time agonizing about whether she should include a few of them. It took a dedicated editor and a dear friend to convince her to include them anyway. One of them alludes to unspeakable trauma, something she doesn’t want to be known for … the other two are about — what else? — Lebanon. Lebanon is inescapable, it seems, even though, when she embarked on this collection, she adamantly decided not to include any poem about Lebanon.

“I was saying for the longest time to the people close to me: this collection will not have Lebanon in it,” Hashem Beck says, “but it is impossible. If I am writing about me, as a mother, there's Lebanon in it, if I'm writing about my relationship to my body, there is Lebanon in it. We are such complicated beings and everything is intersected and interconnected. So I can't say: I'm going to take Lebanon out of my poems. I am so fucking Lebanese, I mean I grew up in Tripoli.”

So, after insisting not to include any poems about Lebanon in O, in fact, the original manuscript did not include any. Then the Oct. 17, 2019 thawra (revolution) happened. Hashem Beck recalls that period as being glued to the television all day and writing all night. At a certain point, sometime in November when the thawra was still going strong, she even came to Lebanon, alone, to take part in it, witness it.

She wrote “Revolution Song” in November 2019, “when people were still out on the streets,” she says.

The name is thawra, and thawra is woman. The woman who kicked the thug in the gut, the woman they came for with sticks,

the woman they came for with law,

who kissed her lover on the street, who steadied her child on her waist, who waved from the old building in her nightgown and white hair, who scolded the soldier, who slept on the bridge,

who explained on the mic, who wailed above the blood,

call her, my people, call her thawra

But initially she did not plan to include it in the collection.

“This is not going to become about the collapse of Lebanon, I refuse this,” she admonished herself. “No, this is a poem that is so internal, it's about the internal world. It's about, you know, the body, the mind, how I feel as a woman, no.”

But then she consulted a dear friend, and an editor, and they both agreed that the poem, and one about the port explosion, ultimately reflected the spirit of the collection.

While O doesn’t read like the typical diaspora collection, nor can Hashem Beck’s oeuvre be categorized as such, it does mimic the multifaceted dance of the diaspora.

"Ghazal: Dear Beirut" was written in the aftermath of the devastating port explosion in August of 2020. Perfectly encapsulating what millions of Lebanese in the diaspora felt at the time, she writes:

I carry a name & many cities. They're light & they're heavy,

Tonight & every night, it's you I want to hold, dear Beirut.

Hashem Beck said she tries not to write only for poetry connoisseurs: “No no no, that’s not why I write. My poetry is for everyone.”

She understands why poetry does not always appeal to a mass audience, because poets “tend to have a bad reputation of being like, ambiguous and above it all. But my view on poetry is that whoever should be able to read it, and it should resonate somehow, in some way. It can resonate in different ways with different people.”

Hashem Beck says, “I think in our daily life, and in our rational life, we are still used to being black and white,” while poetry “opens up this grey zone and kind of asks questions and we are so used to demanding answers. So as long as you're willing not to have answers and just have the questions, then you can enter the poetry realm.”

One of the things that sets O apart is the inclusion of what Hashem Beck calls duets, written in both Arabic and English, which obviously cannot be fully understood by every reader, even with the help of Google Translate.

But while Hashem Beck didn’t write these duets with that specific goal in mind, not being completely accessible to everyone, it is a specific part of her experience that she felt like sharing – knowing it would resonate with people like her, living between worlds and languages.

As with the whole collection, the duets were another expression of writing for herself, rather than catering to an audience.

One thing Hashem Beck is always aware of, by sheer virtue of her multifaceted identity, is to avoid pandering to a Western gaze. “I would be lying if I didn’t tell myself ‘Be careful, Zeina. You don't want to seem a certain way to Western readers, you don't want to give them something on a plate where they're like, oh, the poor Arab woman,’” she says. “ I mean of course, we want to topple certain systems in the Arab world, but at the same time we want to avoid calling on some other culture to save us.”

No-one has contacted her about finding it difficult to read the duets or being frustrated by it, which matches her intentions. “It wasn't conscious at all. It’s not like I sat down one day and said “I'm going to write bilingually now in order to represent something or make a point,’ she says.

The process came to be organically, as she was working on the Arabic poetry podcast Maqsouda, created and hosted with fellow poet Farah Chamma, which made her connect more with the Arabic language. And it was a professor at a university where she was doing a reading who told her “I really love those bilingual poems, because for me, what they're saying to me is, you don't have access to that.”

Ultimately, O allows for nuance and ambiguity in a world that seems more and more devoid of it.

“The world is not black and white, and I think it’s poetry’s job to show that. That's our job. In general.”

But back to Lebanon for a moment: how does Hashem Beck keep Lebanon alive in her household, aside from speaking Arabic with her two daughters.

‘Oh, definitely food,” she says. “I didn't realize it until I was in California the first week. I was crying at some point and my friends in Dubai asked me, “What's wrong? Why are you down?” and I answered: “I can’t find zaatar.”

Although she did end up finding zaatar, it just isn’t the same. “I like it sour, with a lot of sumac.”

Somehow, she says, she will always be drawn to Lebanon. If she moves back one day, she says, “I know I will have enough of it eventually. That's how I am. I think that's how I'm built, I get restless,” Hashem Beck says. “But I want to be allowed the opportunity to be fed up with it. And leave on my own terms.”

Correction: A previous version of this article refers to a professor at a university where Hashem Beck was working. She did a poetry reading at the university but was not employed there.

BEIRUT — “I don’t want to be known as *that* poet, you know? The traumatized one,” Zeina Hashem Beck tells L’Orient Today with a chuckle from California, where she moved to from Dubai about six months ago. Although she has only started her day, and the time difference is about eight hours, her electric energy easily outdoes that of the interviewer. “I just want to write about my...