Proposed cabinet lineup leaked, homosexuality not 'a disease,' no accountability for Tripoli’s citizens: Everything you need to know to start your Thursday

Here’s what happened yesterday and what to expect today, Thursday, June 30 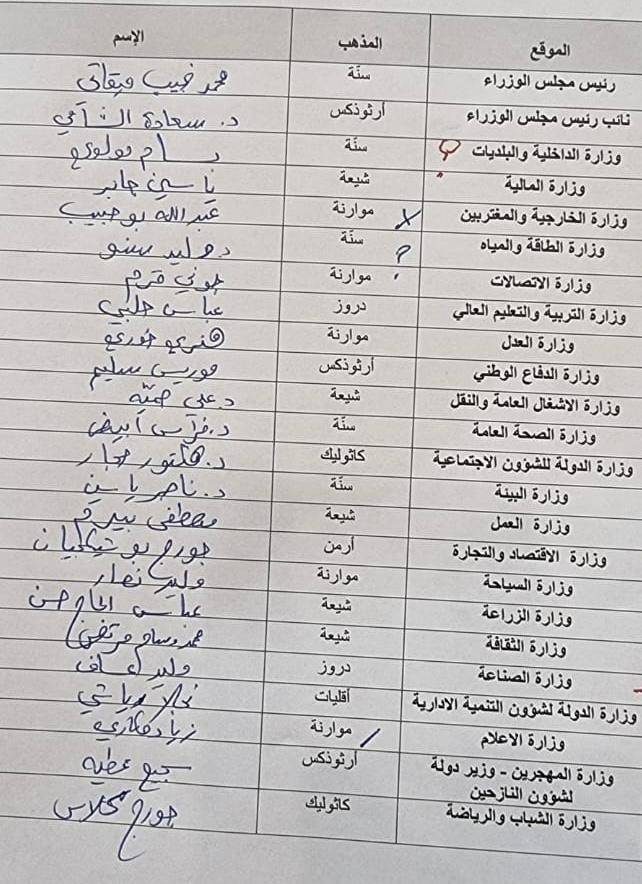 A document of the proposed cabinet lineup submitted by Prime Minister-designate Najib Mikati to President Michel Aoun on Wednesday morning was leaked later that day.

The proposed cabinet lineup submitted by Prime Minister-designate Najib Mikati to President Michel Aoun yesterday morning was leaked later in the day. The list would renew the terms of most current caretaker ministers with the exception of caretaker Energy Minister Walid Fayad, caretaker Finance Minister Youssef Khalil, caretaker Minister for the Displaced Issam Charafeddine and caretaker Economy Minister Amin Salam. According to the leaked list, Fayad, who belongs to Aoun’s share of the former government, has been replaced by oil and gas engineer Walid Sinno. Salam was replaced by the caretaker Industry Minister George Bouchakian, who was, in turn, replaced by Walid Assaf, who is the chairman and general manager of Societe Moderne Libanaise Pour Le Commerce Pepsi Cola. Former member of Parliament Yassine Jaber, who is affiliated with the Amal Movement, took over from Khalil. The Finance Ministry has been held by Shiite politicians as demanded by Amal and Hezbollah since Tammam Salam’s 2016 government, a contentious matter which has caused friction in every subsequent government formation process. Jaber, Economy Minister from 1996 to 1998, refrained from running for the 2022 parliamentary elections, following a 30-year stint in Parliament. Charafeddine would be succeeded by current MP Sagih Attieh, a former Future Movement member. The rest are current caretaker ministers. Following the leak, in an interview with local television MTV, Mikati’s media adviser, Fares Gemayel, called the leak “dishonorable," and said: "This formation was supposed to remain secret between the two presidents,” referring to Aoun and Mikati. Gemayel added that “if the leak was intended to disrupt the government formation process, the message has been delivered.” Tensions ran high during the two-day non-binding parliamentary consultations as several parties boycotted the future cabinet, particularly the Lebanese Forces, the Progressive Socialist Party, the Kataeb, the opposition members of Parliament and Michel Mouawad’s bloc.

Israel accused Hezbollah yesterday of conducting a cyber operation designed to disrupt a U.N. peacekeeping mission on the border that separates the two countries, threatening to retaliate harshly against the alleged hackers. The allegation — which was not met with an immediate response from Beirut or Tehran — came amidst heightened Israeli-Iranian tensions. UNIFIL’s press office told L’Orient Today it received "no direct information” concerning the alleged incident. Israeli Defence Minister Benny Gantz told a cyber conference at Tel Aviv University that "Iranian security institutions in cooperation with Hezbollah [recently] launched a cyber operation with the aim of stealing materials about UNIFIL activities and deployment in the area, for Hezbollah's use,” calling it “yet another direct attack by Iran and Hezbollah on Lebanese citizens and on Lebanon's stability," without elaborating why this would be the case. Established in 1978, UNIFIL patrols Lebanon's southern border and is charged with monitoring the ceasefire that ended the 2006 war between Hezbollah and Israel. Israel has accused Hezbollah of setting up clandestine positions at the border in defiance of UNIFIL while Lebanese officials say Israel continuously violates the ceasefire with air force overflights of their territory, which was documented in a study by AirPressure. Gantz hinted that Israel — which is widely believed to have waged a cyber war against Iran's nuclear facilities and other infrastructure — may retaliate physically against enemy hackers. Meanwhile, Hezbollah’s Executive Committee Chairman Hashem Safieddine yesterday criticized the United States mediator in the Lebanese-Israel maritime border dispute and dual Israeli-American citizen Amos Hochstein, saying, "If we want to wait to see what Mr. Hochstein and the Americans are going to give Lebanon, we won't have gas or oil,” at a ceremony in Shamea, South Lebanon.

Amidst intensifying measures by the government and religious figures to further marginalize Lebanon’s LGBTQ+ community during the worldwide celebration of Pride month, The Lebanese Psychiatric Association released a statement emphasizing that “as psychiatrists, we would like to clarify that homosexuality cannot be considered a disease that requires treatment.” The LPA further elaborated that this conviction follows the international consensus within the medical and healthcare community for many decades. However, the rest of the statement was less convincing as it said it recognizes “that cultural and religious differences in perspective will continue to exist in the foreseeable future” and encouraged a “respectful debate” on the matter and avoiding offensive and threatening language that can “put the welfare and safety of individuals at stake.” It also urged the government officials to abide by the Lebanese constitution in protecting human rights from any form of abuse. Interior Minister Bassam Mawlawi had sent a letter to the General Directorate of General Security and the General Directorate of the Internal Security last week, urging them to crackdown on LGBTQ+ gatherings — leading to the cancellation of several Pride events on Sunday. Lebanon’s Penal Code is sometimes maliciously used to prohibit what is ambiguously referred to as “sexual intercourse contrary to nature” in Article 534, which was put in place by the colonizing French mandate. However, in recent years, courts have increasingly sought to decriminalize homosexuality by ruling that same-sex relations are not “contrary to nature.”

In the continuing blame game between the Interior Ministry, Finance Ministry and Tripoli municipality over a collapsed building in the northern city, Interior Minister Bassam Mawlawi yesterday accused Tripoli’s municipality of severe neglect. His statement says that the municipality didn’t warn “the residents of the building that collapsed in the Qibbeh neighborhood of evacuating it … even though it is old and includes a building violation in terms of adding an upper floor.” The statement further claims the Tripoli municipality sent a letter on Jan. 18, 2022 to the Ministry of Interior and Municipalities, “in which it attached a table of real estate numbers of cracked buildings and archaeological buildings in the city, which pose a threat to public safety.” The ministry added that, however, “the mentioned letter did not include the building located on the property No. 306” — the building that collapsed on Sunday killing a young girl and injuring several residents. Mawlawi also said the Finance Ministry, which he had approached about the possibility of securing the necessary funding to strengthen the cracked buildings in Tripoli, responded that “it is not the responsibility of the state to secure funding for the reinforcement and restoration of cracked buildings, as the issue falls on the owners first and then on the municipality, in accordance with the provisions of the Building Law and the Municipalities Law.” Tripoli’s mayor Riad Yamak had earlier denied "any responsibility" for the tragedy and instead accused the heritage department at the Ministry of Culture of “refusing any request for the renovation of dilapidated buildings, even when the necessary amount was available.”

Lebanon has registered 1,399 COVID-19 cases in the past 24 hours as the country has been witnessing a surge of infections for several weeks now.  According to the daily report published on Wednesday by the Ministry of Health, the rate of positive tests for the last seven days is 14.6 percent, a sharp increase after several months of stability at around five percent. Among the positive cases, 57 are currently hospitalized, which corresponds to an occupancy rate of 13 percent of the units dedicated to patients suffering from COVID-19. Some 19 patients are in intensive care, which corresponds to 11 percent occupancy. Caretaker Health Minister Firas Abiad had said last Monday that a new wave of coronavirus would overload hospitals, adding that the upsurge in cases was due to the rapid spread of two highly contagious variants. Since the outbreak of the virus in Lebanon in Feb. 2020, 1,110,822 positive cases have been reported, while 10,465 people died as a result. Vaccination rates remain low, with barely 45 percent of the population having received at least two doses of the vaccine.

In case you missed it, here’s our must-read story from yesterday: ‘The Sea Ahead’: An emigré returns to a Beirut that’s out of time.”

Want to get the Morning Brief by email? Click here to sign up.The proposed cabinet lineup submitted by Prime Minister-designate Najib Mikati to President Michel Aoun yesterday morning was leaked later in the day. The list would renew the terms of most current caretaker ministers with the exception of caretaker Energy Minister Walid Fayad, caretaker Finance Minister Youssef Khalil, caretaker...