BDL staff strike, end of the rainbow for Master chips, building collapse warning: Everything you need to know to start your Tuesday

Here’s what happened yesterday and what to expect today, Tuesday, June 28, and this week 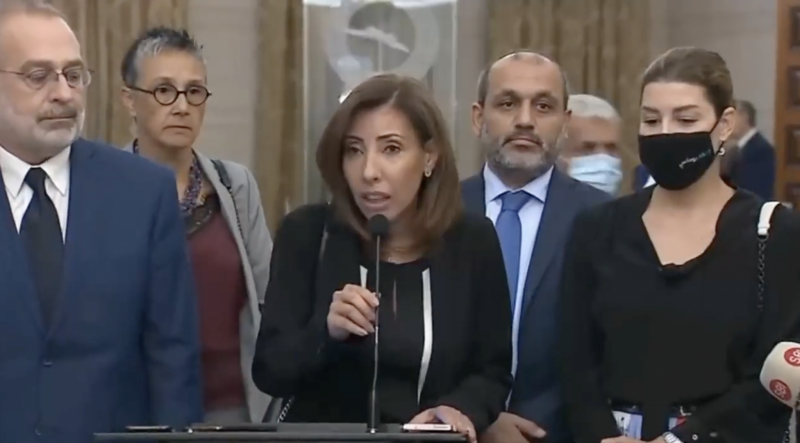 Opposition MPs announce they will not "participate in a government of quotas or of ‘national unity.’" (Credit: Halime Kaakour Twitter)

Central bank employees will go on a one-day strike today, at the call of their union, whose general assembly met yesterday. The strike is meant as a “warning” to protest the “legal proceedings and accusations” that target the central bank and its staff, the representative of Banque du Liban’s union confirmed to L’Orient Today. BDL’s closure means that operations requiring validation of its services will be suspended for 24 hours, which include: transfers abroad, check clearing and exchange operations at BDL’s Sayrafa platform rate. A statement released by BDL’s union on Monday called on BDL’s employees to gather on Tuesday at 11 a.m. in the courtyard of the bank’s headquarters in Beirut to pressure officials to take action. While the Association of Banks in Lebanon also met on Monday to decide whether or not banks should join the strike in solidarity, no official statement was issued and sources close to the organization assured that bank branches will not be closing their doors today.

In the latest installment of the continuing Pride saga that has angered many citizens, Lebanese potato chip company Master announced it will change its packaging, which displays a rainbow. The rainbow has become synonymous worldwide with the LGBTQ+ community as it is a symbol of the inclusion, with the variety of colors representing the variety of gender and sexual identities. Although the company clarified, in a statement, that the rainbow, which appears in an illustration on their “Snackers” product, “has been used for more than a decade and is not related to the symbol” of the LGBTQ+ community, without specifically naming it, it apparently felt the need to distance itself from the connotation even further. The move comes amid muted celebrations of Pride Month by the LGBTQ+ community, after the Interior Ministry called on security forces to stop events that “promote homosexuality,” amid threats and intimidation toward the LGBTQ+ community from elements of the public. A demonstration that was scheduled for Sunday at 5 p.m. in front of the headquarters of the Interior Ministry in Beirut to protest Mawlawi’s decision was postponed due to “threats,” according to its organizers. While article 534 of the penal code criminalizes “sexual intercourse contrary to nature,” in recent years, court rulings have held that this does not apply to consensual same-sex relations between adults.

The renowned Arab Fund for Arts and Culture announced Sunday that it had cut ties with Arabic music magazine and radio Ma3azef following sexual assault allegations. Two musicians associated with Ma3azef are being accused of sexually assaulting a former manager of the Hamra bookshop, cafe and event space Barzakh, Fatima Fouad, who publicly posted a testimony alleging that they had drugged and sexually assaulted her on Dec. 31, 2019, during Barzakh’s opening event. Scheduled for July 16, a concert organized by AFAC will be held in Beirut’s Hippodrome featuring a line-up of Arab musicians. A collaboration with Ma3azef, which, according to AFAC’s statement, is responsible for the concert’s program, was ended on account of Ma3azef’s “silence and and cover up about the perpetrators and for not taking a stance against them.”

The president of the Lebanese Real Estate Authority asserted that a building that collapsed in Tripoli on Sunday, killing one person, is “one of the 4,000 buildings threatened with collapse” in the northern city. Indira al-Zuhairi stated that “the Lebanese Real Estate Authority did not stop calling on the concerned authorities to conduct a survey of the buildings in the governorates which are threatened with collapse since the Aug. 4 explosion. The number of buildings exceeds 15,000 buildings, not counting Beirut.” Zuhairi also said that due to the economic crisis there is an “increased risk of building collapse because of the cost of building materials, and the low salaries that people are receiving are not enough to carry out the restoration, strengthening and maintenance process that is needed.” Tripoli’s Mayor Riad Yamak denied “any responsibility” for Sunday’s collapse of the three-story building and instead accused the heritage department at the Ministry of Culture of “refusing any request for the renovation of dilapidated buildings, even when the necessary amount was available.” Prime Minister-designate Najib Mikati, who hails from Tripoli, asked the health minister to order the hospitals in the area to receive the wounded, and asked the Higher Relief Committee to compensate those affected by the collapse.

The opposition group MPs have announced that they will not participate in a “government of national unity.” In a statement issued yesterday following a meeting with Prime Minister-designate Najib Mikati, MP Halime Kaakour, speaking on behalf of all 13 opposition MPs, said that they “will obviously not participate in a government of quotas or of ‘national unity.’” Kaakour also recalled to journalists that the MPs told Mikati that “he is partly responsible for the current situation.” While Kaakour insists that the opposition MPs “agree” on most subjects, political analysts, commentators and citizens often scrutinize the apparent lack of unity and coordination within the group. Similarly, MP Georges Adwan announced on behalf of the Lebanese Forces’ parliamentary bloc that it, too, would not be part of the new government, as “the conditions we are asking for cannot be met, three months before the end of the [president’s] office term.” President Michel Aoun’s term ends this October. Later in the day, Sami Gemayel, the head of the Kataeb party, also announced that his party would not participate in a “rationed government,” while MP Michel Moawad said that his parliamentary bloc, the North of Confrontation, will boycott the next cabinet. Moawad also denounced a government of “national unity,” adding that this “perpetuates the [political] deadlock.” Prime Minister-designate Najib Mikati, who was charged with forming a new government on Thursday, began yesterday to receive parliamentary blocs and independent MPs, for scheduled non-binding parliamentary consultations. These consultations, preliminary to the negotiations for the formation of the cabinet, are expected to conclude today.

In case you missed it, here’s our must-read story from yesterday: “How Solidere shares became the only game in town.”

Want to get the Morning Brief by email? Click here to sign up.Central bank employees will go on a one-day strike today, at the call of their union, whose general assembly met yesterday. The strike is meant as a “warning” to protest the “legal proceedings and accusations” that target the central bank and its staff, the representative of Banque du Liban’s union confirmed to L’Orient...