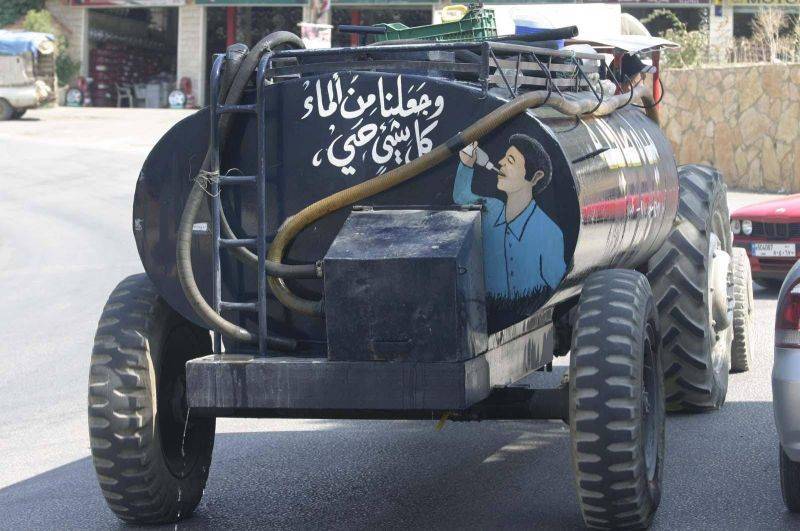 Many residents have been forced to truck in water to fill their tanks. (Credit: Saïd Meallaoui)

Residents of several areas of Beirut and Mount Lebanon have been complaining about a total interruption of running water supply for several days now, driving many to rely on private water tanker services to refill their tanks.

In the statement issued Thursday, the Beirut and Mount Lebanon Water Establishment listed the major complications that exacerbated the harsh rationing and led to the total cut of water supply to a number of areas as follows:

Of the roughly 380 water pumping stations in Beirut and Mount Lebanon, most of them are equipped with generators, which require inflation-battered diesel.

Mkalles - Ras Dikwaneh - Abou Adal: the water establishment explained in its statement that a malfunction has occurred in the electric generator that powers the pumping station in Mkalles that feeds the areas of Mkalles - Ras Dikwaneh - Abou Adal. It added that the establishment “is seeking to secure the necessary funding to repair it. Therefore, the distribution process is currently limited to power supply from the Electricité du Liban, according to its rationing program.” The state electricity provider has only been capable of supplying a handful of hours of power each day at best.

Theft of electrical wires and cables has become common since the onset of the economic crisis in Lebanon around three years ago due to their high resale value, when the country's local currency has lost over 90 percent of its value against the US dollar.

Laqlouq and Upper Jbeil: the establishment said that “water supply shortage is due robbery from the Laqlouq station,” adding that “efforts are continuous to secure alternatives.”

Wata al-Joz and Kesrouan: The water establishment said that “there is a problem with the water supply lines at Wata al-Joz - Kesrouan station, and it will take about a week to fix,” without specifying what the problem is.

The water establishment also added that the value of the salary of the establishment’s employees and management has been slashed by over 95 percent due to the severe economic crisis, but that the establishment “continues to provide all it can of services to the Lebanese citizens.”

Foreign and international organizations including the UN have been involved in supporting the sector for over a year, but a UN program that had been delivering diesel to the water establishments since September has ended. Jean Gebran, the director of the Beirut and Mount Lebanon Water Establishment, confirmed to L’Orient Today on Thursday that this UN program has ended, adding that the establishment is “requesting [aid] from donors and NGOs and they have been securing it. If we need a spare part, [for instance], we request it from donors.”

However, Gebran added that “there have been delays in things,” estimating that receiving replacement parts to conduct repairs of the current problem at several water pumps will take “weeks.” Gebran added that due to these delays, when there are malfunctions at stations, it's going to be much slower to repair.

One killed, several injured in building collapse in Tripoli