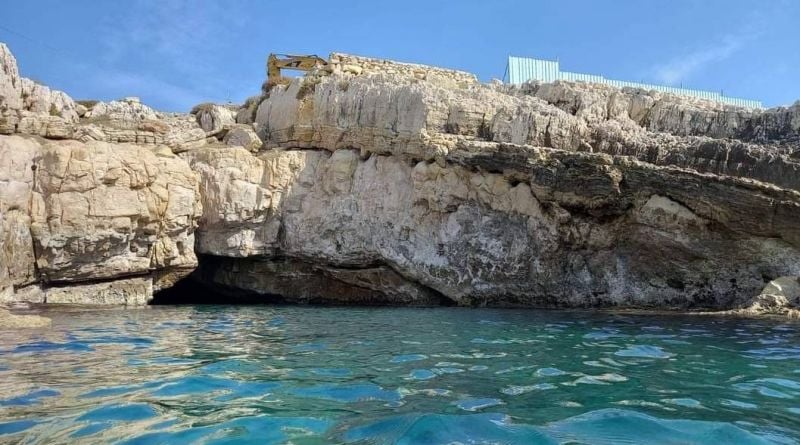 BEIRUT — Excavation work at a private construction site above a natural littoral cave that is home to endangered Mediterranean monk seals in Amchit, north of Jbeil, will be halted today by the town’s municipality.

Work resumed at the site just days ago, having been abandoned last November, after local residents rallied against the development project, pressing the Tourism Ministry to order the cessation of construction work. An excavator and aluminum walls bordering the site were left behind. The recent resumption was immediately met by an outcry from locals and environmental activists.

Antoine Issa, the head of Amchit’s municipality, told L’Orient Today that it will order the excavation work to be halted today “until they hear back from the Environment Ministry’s assessment of the environmental study.” Issa, who denied that he gave parties concerned the permission to resume the works, said that environmental activists and residents of the town are “making a big deal out of the issue,” adding that the land owners “have the right to build on their land.”

In a statement released Wednesday, caretaker Environment Minister Nasser Yassin said that his ministry “is the only ministry that has enforced the law and that it had previously suspended the [construction] project’s work.” Yassin added that the ministry needs more time to assess “an environmental management study,” which the people behind the project filed only around “two months ago.”

Yassin added that the ministry “has not given any approvals for construction works to resume.” Yassin accused the municipality and local authorities of “allowing the project to resume work without referring to the Ministry of Environment.”

Yassin added that the ministry will make “a request to halt the project works and will ask experts from the ministry to conduct a field visit to the site in order to inspect it and look at the situation closely.”

Not much is known about who is behind the development project, but environmental activists claim that Rola Bahnam, a TV presenter with LBCI, is building a private small chalet on the site. The municipality confirmed to L’Orient Today that the project will be a chalet.

Members of parliament, Najat Aoun Saliba and Melhem Khalaf, from the MPs' bloc of the Forces for Change, headed to the Amchit this morning and “contacted concerned parties to get further clarifications on the issue considering the serious environmental impact of these actions.”

As a result of following up with the Environment Minister, the Governor of Mount Lebanon, the Environmental Public Prosecutor and the Mayor of Amchit, “an immediate decision was taken to stop the work on this site, in order to preserve the environmental treasure represented by this cave,” said Khalaf in a tweet today.

Since the land is a private property, Fadwa Kallab, an environmental expert and activist, said that “the problem lies with the municipality who should have classified the area as a ‘maritime public domain’ considering how close the piece of land is from the water.”

Law 144/S of 1925, which dates from the French mandate period, defines the maritime public domain as “the seashore extending to the outermost point that waves reach during winter, as well as sand and gravel beaches,” and thus designates the Lebanese coastline as public property. It was followed by a decree (4810) introduced in 1966 that adopted a more economical approach, making construction on the beach — for example in areas that are classified as touristic or industrial, and only in places that have a public character and economic justification — permissible. Still, the decree also states that the beach must remain accessible to the public, and construction should not obstruct the shore’s continuity.

At least 80 percent of Lebanon’s 220 kilometers of shoreline is privatized, according to a study by the Institute of the Environment at the University of Balamand.

According to a report prepared by Nahnoo, a research and advocacy organization, “The encroachments led to the destruction of several archaeological sites, the deterioration of the beach’s ecological and economic value, and even the loss of a public space for cultural and social practices, which is a fundamental right of citizens.”

Kallab added that “over the years the seashore experiences changes so it’s the responsibility of the government to conduct an annual assessment and locate the farthest point [the wave] is hitting,” adding that this point “changes every year.”

The municipality’s head, Issa, meanwhile confirmed that the people behind the development project have been granted permits from all concerned public institutions, including the Interior Ministry and the Higher Council for Urban Planning.

Kallab pointed out that the appeal to stop the development project on this land will only be won “morally,” meaning that work will stop only if the people behind the project consider the environmental consequences and take the decision to stop the project. Kallab added that “they will destroy the habitat of the seal and the seal will then disappear from the area, the problem is very complex.”

Another way to stop the development project could be through the municipality itself, whereby it objects to the construction works and appeals to the Higher Council for Urban Planning, which then raises the issue to the government, according to Kallab.

The role of the Environment Ministry is merely consultative,” she said, clarifying that the ministry “cannot prevent the works from resuming.”

Farid Abi Younes, an architect from Amchit who has been following the issue and protesting against the development project, said that the town’s residents were initially shocked “the piece of land was even a private real estate because of how close it is to the water.”

Younes is a regular beach goer who has documented, by video, a monk seal foraging and resting in the sea cave of the rocky outcrop in Amchit where the construction site is located.

Being one of the world’s most at-risk marine mammals, with fewer than 700 left worldwide, the Mediterranean monk seal is on the Red List of Threatened Species of the International Union for Conservation of Nature.

Indeed, the species is thought to be “extinct” in Lebanon. For the last five decades, there have been only occasional sightings of monk seals, including those as deaths or bycatch, off of Lebanon’s coastline, according to the local environmental organization, Society for the Protection of Nature in Lebanon. Among the dangers threatening monk seals are habitat degradation as well as fishermen-seal conflict, where fishermen tend to kill the animal alleging it eats their fish stock and destroys their fishing gear.

“The excavators are digging into the ground directly above the cave,” Younes claimed, adding that “even if they stop the works today the damage has already been done.”

BEIRUT — Excavation work at a private construction site above a natural littoral cave that is home to endangered Mediterranean monk seals in Amchit, north of Jbeil, will be halted today by the town’s municipality.Work resumed at the site just days ago, having been abandoned last November, after local residents rallied against the development project, pressing the Tourism Ministry to order...

Zahrani Power Plant to shut down at 5 p.m. Wednesday