Those with dollars and those without: Eid al-Fitr celebrations lay bare the uneven toll of an economic crisis 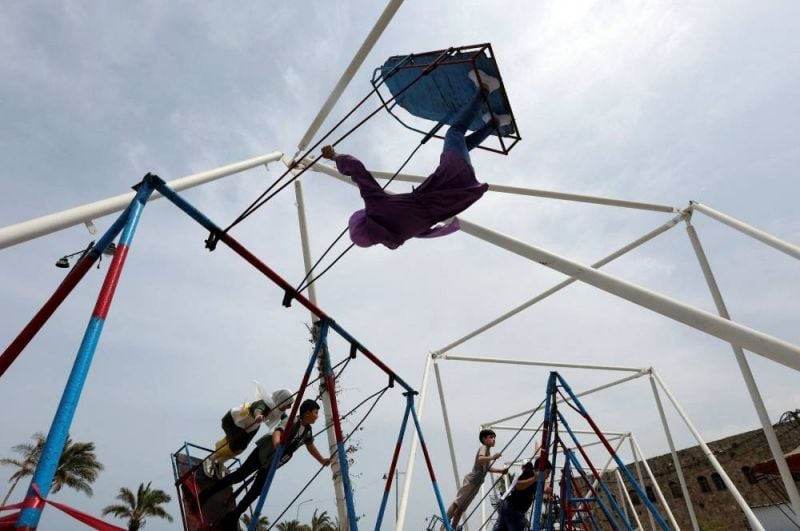 Children ride on swings during the Muslim holiday of Eid al-Fitr, which marks the end of the holy month of Ramadan, at the port-city of Sidon. (Credit: Aziz Taher/Reuters)

BEIRUT — As Eid-al Fitr began this week, the Lebanese lira stood at more than LL26,000 to the dollar on the parallel market, bringing the difference between Lebanese with income in dollars and those earning only local currency into sharp relief.

Eid al-Fitr marks the end of the monthlong dawn to sunset fasting of Ramadan. It is a time of contemplation, but also of sharing and celebrating with family members. But this year, the cost-of-living crisis is squeezing people hard in the tiny, crisis-hit nation.

Eid traditionally meant lavish breakfasts and lunches, new clothes, large family gatherings, varieties of sweets, and the handing out of eiddiyeh, a sum of money usually given to young children on early Eid mornings by grandparents, parents and other family members.

Despite the spiraling crisis, many were determined to celebrate the holiday in any way possible. But what is possible often depends on whether or not a family is receiving remittances from abroad or has a member earning in foreign currency.

A public opinion poll conducted by Statistics Lebanon on behalf of the Konrad-Adenauer-Stiftung in December 2021 found that only 14 percent of respondents reported having access to “fresh dollars.”

Mother of three Lara Alali, who lives in the Bekaa, and earns her salary in lira as does her husband, told L’Orient Today that before the crisis she would usually buy her children new clothes from international high-end stores, take her kids to the amusement park, and would later be invited to her parent’s house for dinner where they would have a full Lebanese spread.

“This year however, I did not buy them any new clothes, and we won’t head to the amusement park as usual. Instead, I promised them that we would make Eid cards for family members together at home and bake a cake from scratch together to take to my parents’ place at night, where we would still have our traditional family dinner,” she said.

Rami Haidar, an accountant and father of five grown children — two of whom have been unemployed since 2020 — said that he received the sum of $300 last week as an Eid gift from his sister, who lives in Canada.

“I was able to buy meat, fish and some new clothes with this money, and we will be having a barbecue cookout in our mountain house this Eid, thanks to my sister,” he said.

Remittances from expatriates have become the primary source of income for many families in Lebanon, especially during holidays and on social occasions.

“There is no way we can afford anything but the very basic necessities by relying on our salaries that are paid in local currency. We need the fresh dollars from our relatives living abroad to cover ‘extra’ expenses, as prices of items increase almost weekly,” he told L’Orient Today.

According to the World Bank, the flows of expatriates’ remittances to Lebanon stood at an estimated $6.63 billion in 2020 alone.

On a monthly basis, thousands of families benefit from these remittances, which constitute one of the most important factors of resilience for many Lebanese families facing the economic crisis.

Those without such an income stream are instead finding ways to cut back.

Maamoul (date or nut-filled cookies) is a staple Eid dessert. However, as prices of nuts, butter, and flour skyrocket, many families plan on preparing cheaper sweet alternatives.

“I want to serve my grandchildren a sweet treat when they come to visit, but I resorted to a cheaper dessert with less ingredients this year,” she explained.

Her neighbor, Dalia Hamieh, said she will be preparing “sugar and banana wraps in pita bread” for her children.

“My mother used to make them for my siblings and I during the war when resources were scarce, and today I find myself doing the same,” she said.

For those with a steady “fresh” dollar income, domestic getaways in resorts in the mountains or by the sea seemed alluring.

Twenty-two-year-old Dana Itani, who works for an international NGO, decided to spend Eid at a chalet with a sea view with her friends.

“A night there is $250 and we are six in total. We’re planning on cooking our own food, and smoking shisha all night in an attempt to try and get our minds off the craziness Lebanon has become,” she said.

Ali Husseini, a retired banker and resident of Beirut’s southern suburbs, said he is simply looking forward to his sons coming home from Qatar.

“It doesn’t matter that we have frequent power and water cuts in our building, or that my wife is too depressed from the circumstances to even leave the house, but the fact that I’ll be under the same roof with my children this year is enough for me to celebrate,” he told L’Orient Today.

Lebanon’s financial crisis is regarded by the World Bank as one of the worst since the nineteenth century. Experts have blamed the failed policies by successive governments, which ran up a public debt of over $95 billion, as well as fiscal engineering by the central bank that kept the lira pegged to the dollar at an artificially low rate.

According to Lebanon’s Central Administration of Statistics, year-on-year prices had increased 208.13 percent as of March, with transportation prices rising the most — 488.85 percent — while food and non-alcoholic beverages recorded an increase of 390.38 percent.

The rising costs, along with a financial crisis that the UN says is largely responsible for pushing 82 percent of the population below the multidimensional poverty line, mean more people than ever before are going hungry in Lebanon, and lavish Eid celebrations have become a thing of the past for most.

BEIRUT — As Eid-al Fitr began this week, the Lebanese lira stood at more than LL26,000 to the dollar on the parallel market, bringing the difference between Lebanese with income in dollars and those earning only local currency into sharp relief.Eid al-Fitr marks the end of the monthlong dawn to sunset fasting of Ramadan. It is a time of contemplation, but also of sharing and celebrating with...