According to a source within the organization, "the option of a strike" will be studied during the meeting scheduled for Friday. 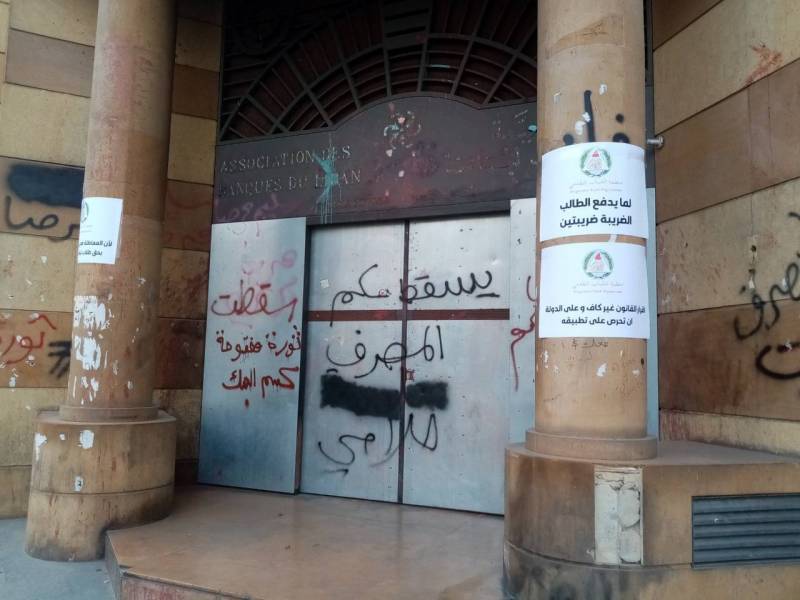 The entrance of the Association of Banks in Lebanon in Beirut. (Credit: M.A./OLJ)

As several legal proceedings launched in Lebanon and abroad against Lebanese banks by depositors challenging the restrictions they have imposed on access to their accounts have been successful in recent months, the Association of Banks in Lebanon (ABL) has planned to meet tomorrow Friday in a general assembly to decide on the strategy to adopt in the face of this growing pressure.

The meeting will also be held the day after the arrest, on the orders of Mount Lebanon Public Prosecutor Ghada Aoun, of Raja Salameh, the brother of central bank governor Riad Salameh.

The announcement of this meeting was made on Tuesday, in the wake of the Fransabank case which was made public on Wednesday. The banking institution, one of the largest in the country, is under an order to freeze its assets issued by the head of the Enforcement Department in Beirut, Judge Mariana Anani, in a case in which the bank is facing off against one of its depositors, who is demanding the return of his funds in the currency in which they were denominated, and not in bank checks.

In the wake of the announcement, the ABL pointed to a willingness on the part of the authorities to let bank officials deal with the anger of depositors alone "for reasons that are not within its purview.” The association subsequently called on the government to intervene to "speed up the implementation of decisions that would put an end" to the various procedures targeting the banks, and to press for the adoption of a law establishing formal capital controls.

To achieve this goal, some of the members of the ABL are considering launching a strike order, according to three sources contacted by L'Orient-Le Jour, two banking sources and a legal source close to the sector. When contacted for comment, the media office of the ABL simply confirmed that the meeting was scheduled for Friday, without expanding on the possible decisions that could emerge. A source at the association suggested that "the option of a strike will be considered during the meeting, as a way of rejecting the current accusations" against the sector.

According to the various accounts given by these sources, the strike option has been under consideration for at least a week by some members of the association, who see it as a way of pushing the authorities to pass legislation that could prevent banks from being sued by depositors challenging the banking restrictions. Some in this camp would advocate starting with a three-day strike that could turn into an open strike. Others call for closing branches while continuing to feed ATMs. Others, finally, are resolutely opposed to any approach involving the closure of establishments, a position that Prime Minister Najib Mikati shares and for which he has been lobbying for a week, according to one of the sources interviewed.

Facing a major crisis, which had been brewing since at least 2017, of foreign currency liquidity, banks began in the fall of 2019 to limit depositors' access to their accounts, first in dollars, and then even in lira beginning in late 2020. The causes of this crisis are also linked to the overexposure of a number of banks to a Lebanese public debt with juicy returns, but contracted by a state whose functioning is considered by many to be plagued by corruption, incompetence, and regularly paralyzed by political tensions. Banks have also invested tens of billions of dollars in certificates of deposit at Banque du Liban, whose net reserves have been largely negative for several years and which has stopped intervening in the market to support the official parity of 1,507.5 pounds to the dollar that has been in place since late 1990.

While the restrictions officially put in place by the ABL since November 2019 are illegal, neither BDL (which had the means to act in the short term) nor the Parliament (which could have passed a capital control law) intervened to regularize the situation. Banque du Liban, on the other hand, adopted numerous circulars that led to the multiplication of exchange rates between the lira and the dollar and to the establishment of a difference between the dollars "blocked" by banking restrictions excluding withdrawals and transfers abroad, and the "fresh dollars" deposited after April 9, 2020, which could still be freely used.

After falling by a few hundred units, the pound began to collapse in larger proportions as early as the spring of 2020. The steps taken to obtain aid from the International Monetary Fund from that time onwards by the two governments that succeeded each other after the resignation of Saad Hariri's government in the fall of 2019, under the pressure of popular protests, did not produce results. The one initiated by that of Najib Mikati is still underway.

CreditBank in the sights of Ghada Aoun

In this context, more and more disgruntled depositors have started to bring cases before local courts, while some depositors holding a nationality other than Lebanese have turned to foreign judges. The events accelerated last November, beginning with a ruling against Saradar Bank in France after a case brought by one of its depositors. While BLOM Bank won its case against one of its clients in December in a London court over a similar matter, the Société Générale de Banque au Liban (SGBL) and Bank Audi were sanctioned in the same country a few weeks ago, before the blow inflicted on Wednesday on Fransabank by a Lebanese judge. The judge sealed the safes of two branches belonging to the Fransabank network, which opened their doors on Thursday, but without carrying out any banking transactions, according to a source at the bank contacted that day.

In parallel to these cases, which some jurists believe should also be considered in their political dimension, another series of proceedings was launched at the initiative of Mount Lebanon Public Prosecutor Ghada Aoun, who is reputed to be close to the camp of President Michel Aoun and in a head-on battle with BDL Governor Riad Salame.

Last Thursday, the judge froze the assets of five banks in Lebanon — Bank of Beirut, Bank Audi, SGBL, BankMed and BLOM Bank, respectively headed by Salim Sfeir (also president of ABL), Samir Hanna, Antoun Sehnaoui, former minister Raya el-Hassan and Saad Azhari — and those of the members of their boards of directors, while investigating the transactions they made with the BDL. These banking institutions are, along with several others, are the subject of complaints alleging "waste of public funds, breach of trust and fraud against depositors, and illicit enrichment.” These complaints were brought by a collective of lawyers, "The People Want the Reform of the Regime," which accuses the banks concerned of having borrowed several billion dollars from the Bank of Lebanon at the beginning of the financial crisis, transferred them abroad and then repaid them at the official rate of LL1,507.5.

The magistrate told Reuters on Thursday that she had issued a travel ban on Creditbank chairman Tarek Khalife and frozen all of the bank's assets, including property and vehicles, as part of an ongoing investigation. Tarek Khalife and Creditbank could not immediately be reached for comment. Judge Aoun did not provide further details.

The decisions taken by the prosecutor are "without legal basis," Joseph Samaha, former president of a chamber of the Court of Cassation and lecturer in criminal procedure at Saint Joseph University (USJ), told L'Orient-Le Jour. A judge who requested anonymity said in the same vein that no law provides that a prosecutor has the prerogative to take restrictive measures against people and their property. However, he indicated that there is no law that prohibits this either.

It is therefore quite certain at this stage that this new procedure will weigh in the strategy that the ABL intends to adopt from tomorrow, the organization having recently aasserted its willingness to take legal action against the judge (an allusion to a possible removal procedure).

As several legal proceedings launched in Lebanon and abroad against Lebanese banks by depositors challenging the restrictions they have imposed on access to their accounts have been successful in recent months, the Association of Banks in Lebanon (ABL) has planned to meet tomorrow Friday in a general assembly to decide on the strategy to adopt in the face of this growing pressure.The meeting...