Circular 161 extended, Daesh attacks foiled, EU to send elections observers: Everything you need to know to start your Thursday

Here’s what happened yesterday and what to expect today, Thursday, Feb. 24 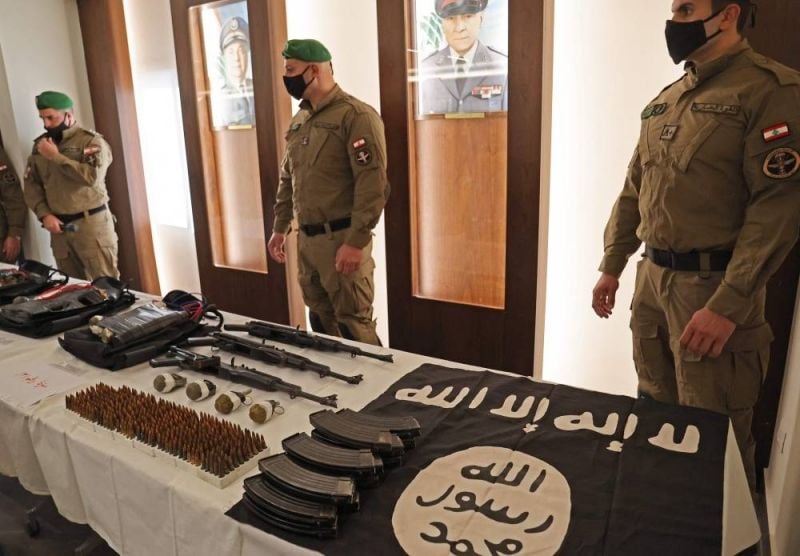 The Internal Security Forces show weapons the Interior Ministry said were seized from the Daesh (Islamic State) group which was planning attacks on targets in Beirut's southern suburbs, during a press conference in Beirut on Wednesday. (Credit: Anwar Amro/AFP)

Lebanon’s central bank yesterday extended the deadline for Circular 161, allowing it to continue to pump US dollars into the currency market until at least the end of March. After the lira reached an all time low of LL33,700 to the US dollar in mid-January, the central bank amended the original circular by removing all quotas, effectively allowing banks to sell US dollars in unlimited quantities to their clients. Since the release of the circular on Dec. 16, the central bank’s Sayrafa rate has strengthened from LL22,700 to the US dollar to LL20,300, as of Tuesday — a 12 percent gain in value. On Feb. 2, the central bank announced that the Sayrafa rate will be used for all fresh and all international card payments, including point-of-sale and e-commerce transactions and ATM withdrawals. On Tuesday, the central bank released Circular 614, authorizing all money transfer companies to carry out foreign exchange transactions, in a bid to increase the flow of US dollar funds to the central bank. Until yesterday, only OMT, the representative of the Western Union network in Lebanon, had been authorized to offer this type of service.

The Lebanese Internal Security Forces foiled attacks planned by Daesh affiliates, Interior Minister Bassam Mawlawi said yesterday. The Daesh (Islamic State)-affiliated militants had planned to carry out suicide attacks in Beirut’s southern suburbs. In addition to suicide vests, the plan included rocket-propelled grenades and gunfire, Mawlawi said, adding that it would have “killed many people.” Daesh was responsible for a twin suicide bombing in Beirut’s southern suburbs in 2015 that claimed more than 40 lives. That same targeted area is a support base of Hezbollah, which sent fighters to Syria during its civil war and, together with the Lebanese Armed Forces, ran out Daesh from northeast Lebanon in the summer of 2017. The ISF said in a presentation that the network in Lebanon had been told on Feb. 17 that the operation would be carried out in the next few days. The two suspects were arrested that same day and are still in custody, Mawlawi said. Explosives, weapons and munitions were also seized.

Only President Michel Aoun’s signature is needed for the budget to be sent to Parliament, according to MP Ibrahim Kanaan. Kanaan, who also heads Parliament’s Finance and Budget Committee, made these comments while addressing a conference organized by the Social and Economic Council yesterday. Kanaan also shared what he considers to be the budget proposal’s limitations: an increase in taxes while the economy is suffering its worst contractions, and an assumption of a 3 percent GDP growth rate in 2022, which he said “is not feasible given the current conditions.” While the budget is a main requirement for a deal with the International Monetary Fund to have any chance at being sealed, Najib Mikati’s cabinet has been criticized for rushing its preparation and approval to speed up IMF talks. In yesterday’s cabinet session, a commission was created and tasked with handling issues facing the waste management sector, as trash is once again piling up on streets and roadsides across the country. It also set the prices of five- and 10-year Lebanese passports at LL600,000 and LL1.2 million, respectively. Cabinet did not, however, address a plan to rescue the electricity sector.

The European Union will deploy an elections observation mission to Lebanon. The EU’s fourth mission to Lebanon since 2005, announced in a statement yesterday, will consist of 80 people. The core team of 10 elections experts, based in Beirut, will arrive at the end of March and will be joined by 30 long-term observers, who will be deployed regionally by mid-April. Finally, 40 short-term observers will join the mission around election day to observe the polling, voting and vote counting, including overseas voting in countries with a significant Lebanese diaspora, according to the statement. The EU Election Observation Mission will remain in Lebanon until the completion of the electoral process, holding a press conference in Beirut 48 hours after election day to issue its preliminary statement of findings. The mission will also publish a final report, including a final assessment of the electoral process with recommendations for reforms to improve future elections.

Culture Minister Mohamad Mortada has temporarily halted the controversial restoration work on Saida’s famed sea castle. This decision came after multiple objections to the renovation plans from professionals and activists. Mortada yesterday issued a statement instructing the Directorate General of Antiquities to halt work for two weeks. In that timeframe, experts and specialists can inform the Culture Ministry about their observations of the ongoing works in order to have a chance to present alternative proposals for the renovation. The initial outcry followed the release of plans showing the use of modern materials, such as cement and wrought iron, in the restoration of the almost 1,000-year-old crusader fortress. The materials are being used to reinforce and in some cases rebuild the castle’s arches, which many believe will erase the fortress’ historical character in addition to adversely affecting the original material.

In case you missed it, here’s our must-read story from yesterday: “The Beirut port silos: A memory the state wants to tear down despite myriad preservation proposals.”

Lebanon’s central bank yesterday extended the deadline for Circular 161, allowing it to continue to pump US dollars into the currency market until at least the end of March. After the lira reached an all time low of LL33,700 to the US dollar in mid-January, the central bank amended the original circular by removing all quotas, effectively allowing banks to sell US dollars in unlimited...