Bassil: We don't want to tear up Mar Mikhael agreement, but improve it 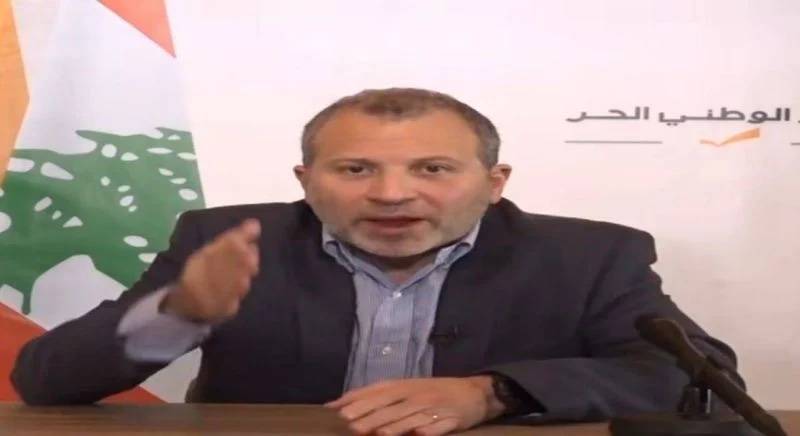 BEIRUT — The head of the Free Patriotic Movement Gebran Bassil said Sunday that he is not ready to end the Mar Mikhael agreement concluded in 2006 between his party and Hezbollah, but that it should be “improved” to meet new economic and financial challenges.

In a New Year's address, ahead of an anticipated speech by Hezbollah leader Hassan Nasrallah on Monday evening, Bassil also said that the alliance between Hezbollah and Parliament Speaker Nabih Berri's Amal Movement had impacted the Mar Mikhael agreement.

The FPM and Hezbollah signed the Mar Mikhael agreement in February 2006, sealing their partnership. If since then relations between the two parties have experienced tensions over the years, especially regarding the involvement of the pro-Iranian party in the conflict in Syria, they are now really in question by the FPM, due to differences on many issues.

Lebanese President and FPM founder Michel Aoun called last Monday for an “urgent national dialogue,” especially on the country’s defense strategy, in what was widely interperted to be a reference to Hezbollah’s weapons and their intergration into the state.

In addition, the FPM is critical of the role played by Hezbollah-affiliated ministers in creating the present cabinet impasse, which has meant that Najib Mikati’s government has not met since Oct. 12. The premier has refrained from convening cabinet out of fear that Hezbollah- and Amal-connected ministers might walk out of the session if no clear decision is taken on the future of Judge Tarek Bitar’s leadership of the investigation into the 2020 Beirut port explosion. Hezbollah wants Bitar removed from the probe on the grounds that he has “politicized” the investigation.

The amendments to the electoral law for the 2022 elections are also a source of discord between the Aounists and the pro-Iranian party.

For some observers, part of the FPM’s base reproaches the alliance with Hezbollah, a position that has embarrassed the Aounists, especially since the clashes in mid-October in the Tayyouneh neighborhood. On the sidelines of an Oct. 14 demonstration by Amal and Hezbollah against Bitar, shooting errupted between armed individuals among the protesters and gunmen located in the neighborhood of Ain al-Rummaneh, whose residents are traditionally close to the Lebanese Forces of rival Christian leader Samir Geagea.

Mar Mikhael rather than Tayyouneh

During his lengthy speech, the FPM leader argued that the Mar Mikhael agreement was reached “in reaction to the attempt by the international community and their Lebanese partners to isolate” the Shiite party. He considered that in this context “attempts to sow discord continue, as was the case during the Tayyouneh clashes.”

“We chose Mar Mikhael rather than Tayyouneh, because we know that Samir Geagea has always been linked to foreign interests, whether Israel or the United States,” Bassil said.

However, Bassil went on to say that the implementation of the Mar Mikhael agreement is still incomplete and that some elements of it “do not pass anymore,” especially regarding the “construction of the state and the protection of the corrupt.”

“Where is the consensual democracy when the cabinet is paralyzed and the mandate and prerogatives of the president are undermined? When the Constitutional Council is undermined? When the defense strategy remains only an empty slogan, without content?” the FPM leader asked.

Referring to statements by the head of Hezbollah, who said that these issues should be resolved “behind the scenes” between the two parties and not via media statements, Bassil said, “He is right, but we tried to launch a dialogue in depth and develop the text of our agreement, we even set up a joint committee, but it met only once, as if these issues were not urgent.”

The resistance must remain under the control of the state

“We do not want to cancel or tear up the agreement of Mar Mikhael, but we want to improve it, because it no longer meets the challenges we face, especially from an economic and financial point of view,” Bassil said. “Our priorities are the state and reforms, theirs are the resistance and its defense. We can work on both, but the resistance must remain under the control of the state and not above it. We cannot afford to lose the state for the resistance,” he continued.

The head of the FPM also criticized the alliance between the Shiite party and Amal, saying that it is because of this alliance between the two parties that Hezbollah takes decisions “ by which they themselves are not convinced” and which impact the Mar Mikhael agreement.

“When we find out that the party that decides against us in the agreement is Amal, we have the right to demand a revision of this agreement,” Bassil said. He also justified his refusal to break this agreement by pointing out that this “will not win votes in the elections, but on the contrary, will make the party lose its credibility.”

“We have made our calculations and obviously we are stronger if we go to Hezbollah in the elections,” he added.

Bassil also called for a “big change” in the country’s politics, stressing that this “requires more than elections.”

“The Lebanese political system must change,” he said, adding, “This regime has become a regime of community vetoes, even for simple decisions.”

Bassil argued that the present “centralized state no longer works” because of the current political class. “But we do not want to live in a failed state,” he said, reiterating the call made last Monday by Aoun for “expanded administrative and financial decentralization.” These words were criticized by the president's detractors, who accused him of pushing the country towards community division.

“We cannot continue to force the inhabitants of certain regions to pay 75 percent of the taxes when they only benefit from 25 percent of the state’s expenditures,” Bassil said, insisting that decentralization does not mean a resort to federalism or confederalism. He emphasized that these political changes must take place “through dialogue, as proposed by the president.”

In addition, Bassil again slammed Berri, denouning the fact that votes in Parliament are taken “according to his will because he forbids electronic voting.” Bassil also blamed the Amal Movement for blocking reforms in the electricity sector. He criticized the finance ministers, members or close to Amal for years, for blocking the construction of the Deir Ammar power plant "”because they could not benefit from it and because it is not located in a region that interests them.”

Bassil finally accused central bank governor Riad Salameh, “who is protected by the political class,” of having carried out “the biggest organized robbery of people’s funds.”

“He is being prosecuted in seven European countries, but in Lebanon it is forbidden to prosecute him,” Bassil said, accusing Salameh of “rebelling against the decisions of the cabinet, preventing the forensic audit of the central bank and sabotaging the financial recovery plan and the negotiations with the International Monetary Fund.”

This article was originally published in French by L’Orient-Le Jour.

BEIRUT — The head of the Free Patriotic Movement Gebran Bassil said Sunday that he is not ready to end the Mar Mikhael agreement concluded in 2006 between his party and Hezbollah, but that it should be “improved” to meet new economic and financial challenges. In a New Year's address, ahead of an anticipated speech by Hezbollah leader Hassan Nasrallah on Monday evening, Bassil also said...