Lebanese homeowners flock to solar power amid electricity crisis, but can a patchwork of panels solve Lebanon's energy woes? 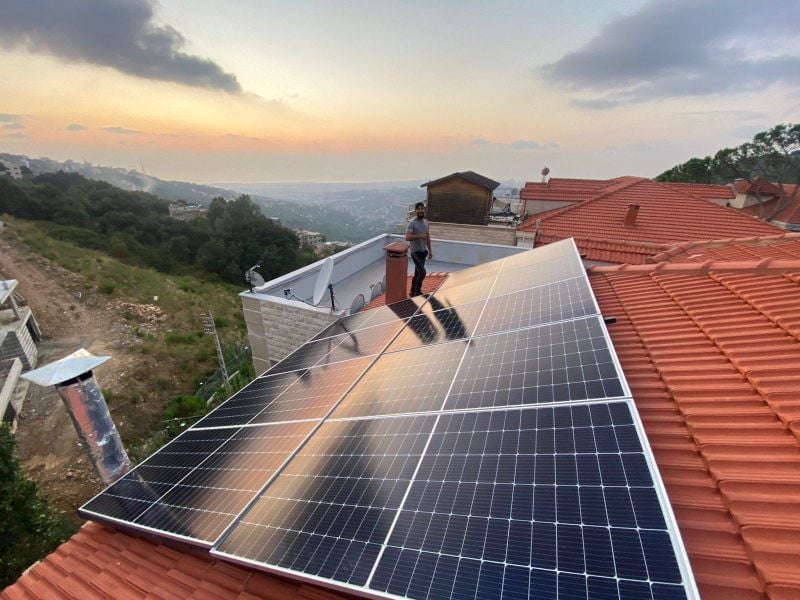 BEIRUT — Over the summer, Elio Lahhoud, a 22-year-old sports teacher who lives in Baabda, was struggling and sweating through lengthy daily electricity cuts from both the state power utility and his private generator provider.

Combined, Électricité  du Liban and his generator were providing 10 hours of power a day, an all-too-common scenario in Lebanon after an economic and currency crisis deprived the country of diesel and consequently, electricity.

Lahhoud’s family was paying LL1.5 million (about $75 at the parallel market exchange rate) for a 15-ampere generator subscription, “while getting very little electricity, so it felt like we were paying a lot of money for nothing,” he told L’Orient Today.

So, in August, the family paid $3,900 to install solar panels capable of providing 12 amperes of power on the roof of their house, allowing them to stop using generator power. Between the few hours of state electricity provided and the solar power, they now have 24-hour electricity “and it’s going great,” Lahhoud said.

“The fact that we have 24 hours of electricity actually inspired a lot of my neighbors to install solar panels like us,” he added.

Before the crisis, the high cost of solar panels deterred many Lebanese from considering an investment in renewable power. Since the collapse of the financial system, financing for any major renewable energy developments has been frozen, and a subsidized loan program for renewable energy and energy efficiency projects that had been run by the central bank has also stopped.

As Lebanese officials appeared at the COP26 United Nations climate change conference in Glasgow this week, Lebanon seems to be farther than ever from meeting its target of 30 percent renewable energy by 2030.

However, while major projects have been on hold, the electricity crisis has driven a boom in individual solar power installations.

Architect Hala Dacache saw the electricity crisis coming before it reached its peak. Once the economic crisis started, she told L’Orient Today, she anticipated worsening blackouts, so in April, she paid $7,000 to install a 15-ampere solar power system on her house. An added incentive to make the leap, she said, was that Lebanon’s regulations on solar installations are relatively simple, compared to the bureaucratic red tape imposed by some European countries.

“Though I paid a relatively high cost, unlike the majority of the country, I have electricity 24l7 with the strong batteries that were installed and that never run out of power,” Dacache said. Like Lahhoud, she now relies on a combination of state electricity, when available, and solar power but is no longer using a generator.

“Even if the fuel situation becomes better, the whole world is going towards renewable energy so my investment is in its right place,” she added.

Representatives of four companies installing solar systems in Lebanon told L’Orient Today that the volume of residential solar power installations they are doing has risen substantially since the crisis.

When the the company gets a request, he said, “We send our engineers to assess the amount of electricity that they need, then we validate the numbers; as in, we check how many amperes the consumer needs at their maximum capacity and on average in their day, and then we design the storage system according to how many hours they need electricity per day.”

Despite the upsides of solar power in the current crisis, the high cost of solar systems still deters many potential customers, particularly since the central bank's subsidized loan program is no longer operational and since the cost of solar installations generally has to be paid in US dollars.

Karim el Hennawi, the chief technical officer at GP Stellar company, told L’Orient Today, “In general, we check how much state power they are getting, because it is much cheaper, and we check if they want to keep their generator subscription and we make our designs accordingly, because if people want to rely completely on solar panels the expense would reach a cost that is up to $30,000."

Another factor that prevents many people from installing solar systems is the large space occupied by the solar panels, which presents a logistical problem for residents of apartment buildings who would want to install such systems individually.

“The size of panels is huge, which means that you can only do it at a private residence, or one or two people can install it in a building,” Hennawi said.

A 2020 World Bank report that examined the potential for distributed solar power in Lebanon proposed convincing generator owners who currently sell subscriptions at a neighborhood level to incorporate solar into their business models.

“Commercial owners of diesel generators can utilize their customer network and shift to providing electricity from distributed renewable energy generation," the report noted. "Workers can be retrained and retooled to install and maintain solar PV systems.”

However, to date, no project has been launched to attempt to carry out this recommendation.

While generator owners may not have jumped on the solar power bandwagon, Zeinedine said that due to the high unemployment rate and the high demand for solar systems, the number of people who are trying to make a living through installing solar panels is increasing, which in some cases paves the way for low quality work.

“Everyone is claiming that they’re experts in the solar system now, and those exact people are claiming as a marketing strategy that they can provide 24/7 solar power with a cheap price, which is actually either ignorant or manipulative,” he said.

One such freelance solar panel installer, a computer programmer by trade who asked not to be named, told L’Orient Today that although he had not studied solar energy and had no experience in solar systems, he picked it up as a side job hoping that it would bring him an income in US dollars amid an economic crisis.

“One has to adapt to what’s trending and in such a crisis it felt like a good idea to invest in this business,” he said, adding that his cousin, an electrician, had taught him about electrical wiring.

The freelance installer said that people often pick him over established companies because he provides a less costly service.

“Big companies have offices and employees’ salaries as well as shared ownership, while on my end it’s just me and sometimes someone helping me, which would make the service cheaper,” he said.

Last month, responding to the rise in solar panel installations and in an attempt to regulate the industry, the Energy Ministry announced that it will start issuing licenses for people wanting to install solar panels on their houses, with already-installed systems being exempted. The Interior Ministry also asked the public to comply with the Energy Ministry’s decision, noting that improperly installed panels could fall, presenting a safety risk.

While some have voiced hopes that the boom in solar power installations could be a silver lining to the energy crisis, others caution that uncoordinated efforts by individual consumers will not solve the crisis at a national level.

“Utility-scale solar is a long-term solution, and it shouldn’t be installed like the chaotic way it is happening at people’s homes, but it should be systematic,” Marc Ayoub, coordinator of the Energy Policy and Security Program at the American University of Beirut, told L’Orient Today.

“Instead of residents of each house installing solar on their own, the country should have a national policy to try to provide a large number of kilowatts for major areas,” Ayoub said. “For example, you could have huge panels in Bekaa that would provide hundreds of kilowatts of electricity for the whole area.”

He added that even if Lebanon implements solar energy in a coordinated way and on a national scale, the country should not aim to rely exclusively on solar energy; rather, he said, it should be complementary to other energy sources.

“Utility scale solar should be part of a solution rather than it being exclusive,” Ayoub said.

BEIRUT — Over the summer, Elio Lahhoud, a 22-year-old sports teacher who lives in Baabda, was struggling and sweating through lengthy daily electricity cuts from both the state power utility and his private generator provider. Combined, Électricité  du Liban and his generator were providing 10 hours of power a day, an all-too-common scenario in Lebanon after an economic and currency...