At least six dead, 30 injured after gunfire erupts as Hezbollah and Amal stage protest against Bitar 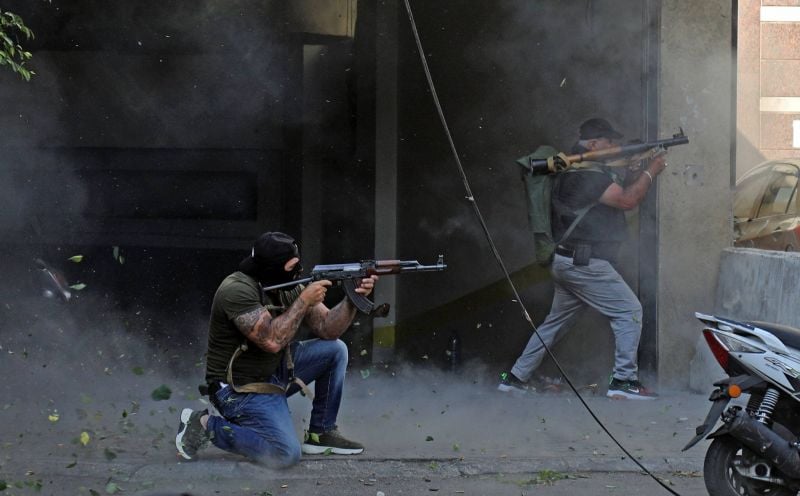 Fighters from Hezbollah and Amal movements take aim with (L to R) a Kalashnikov assault rifle and a rocket-propelled grenade launcher amidst clashes in the area of Tayyouneh on Oct. 14, 2021. . (Credit: Ibrahim Amro/ AFP)

BEIRUT — At least six people died and more than 30 others were injured after shooting broke out during a protest organized by political parties that have criticized lead Beirut port blast investigator Tarek Bitar and what they describe as his “politicized” handling of the investigation.

The initial exchange of fire escalated into an hours-long street battle that raised fears of a descent into wider civil conflict, particularly as Hezbollah and Amal party officials blamed the Lebanese Forces party, a political opponent of the two, for the outbreak of violence.

Speaking Thursday evening, after the streets had calmed, President Michel Aoun referenced the echoes of the country's Civil War — in which he, along with many of the country's current political leaders, was a combatant — saying, "It is not acceptable for weapons to return as a language of communication between the Lebanese parties, because we all agreed to turn this dark page from our history."

As hundreds of supporters of Hezbollah and the Amal Movement were gathering next to the Beirut Justice Palace Thursday morning, another group of supporters passing through the nearby Tayyouneh area en route to the demonstration were “exposed to bursts of gunfire,” the Lebanese Army said in a statement.

It was not immediately clear who had opened fire on the group. Hezbollah and Amal leadership issued a statement in the afternoon claiming that the protesters “were subjected to an armed attack by groups of the Lebanese Forces party that spread out in the adjacent neighborhoods.”

The Lebanese Forces said in a statement that this was a "false accusation." Its leader, Samir Geagea, said in a statement of his own, “I denounce the events that took place in the Beirut area, especially the Tayyouneh area, on the occasion of the demonstrations called by ‘Hezbollah.’”

He blamed the violence on the "presence of uncontrolled and rampant weapons that threaten the citizens at any time and in any place" and called on the country’s leadership to “conduct full and accurate investigations to determine the responsibility for what happened in the capital today.”

The army statement said soldiers had condoned off the area and were searching for the shooters. In a subsequent statement, the army called on civilians to evacuate the streets and said its soldiers would fire on any armed people found in the streets.

In the evening, the army announced that its patrols had arrested nine people "from both sides," one of them Syrian, in connection with the street battles.

As gun and rocket fire continued into the afternoon, Prime Minister Najib Mikati and Defense Minister Maurice Slim arrived at the Army command's operations room to meet with Army Commander General Joseph Aoun. Mawlawi said the "civil peace is not to be tampered with" and that "all agencies are doing their part to move to the stage of arrests so that the law can take its course."

Mawlawi said the incident had begun when a sniper opened fire and hit the first victim in the head.

As of mid-afternoon, the Lebanese Red Cross and Health Ministry reported that the death toll had risen to at least six and the number of injured was more than 30.

Amal named three of the victims as Mustafa Munir Zbeeb, Hassan Mohammad Subhi Mashik and Hassan Jamil Nehmeh, and Hezbollah named the other three as Mohammad Hassan al-Sayed, Ali Bassam Ibrahim and Maryam Mohammad Farhat, who was reportedly hit by a bullet while inside her house.

A Hezbollah spokesperson said in a statement, “As the peaceful demonstrators headed to the Justice Palace to protest the politicization of the judiciary, they were attacked with live bullets by snipers on some rooftops.”

A protester at the Justice Palace who did not give his name told L’Orient Today, “We came here peacefully for the specific goal of demanding justice in the port blast investigation after the unfair decisions made in the face of our people, and as you can hear there are people firing at us.”

He added, “Our reputation is that we use our weapons, but it is the other groups who are currently firing at us, and that’s their culture.”

A joint statement from Hezbollah and Amal after the shooting said the “attack by armed and organized groups aims to drag the country into a deliberate strife” and that responsibility falls on “instigators and parties that hide behind the blood of the victims and martyrs of the port in order to achieve malicious political gains.” In another statement released later in the day, the groups specifically blamed the Lebanese Forces.

The confrontation between Bitar’s supporters and Shite political parties Amal and Hezbollah has escalated over the past week.

In a speech on Monday, Hezbollah leader Hassan Nasrallah accused Bitar of bias in his line of questioning and of using “the blood of victims to serve political interests,” demanding a “transparent judge” to complete the investigation.

On Tuesday Bitar’s investigation was suspended for a second time after he was formally notified of new complaints against him at the Court of Cassation by MPs Ali Hassan Khalil (Amal/Marjayoun-Hasbaya) and Ghazi Zeaiter (Amal/Baalbeck-Hermel).

But on Thursday the court dismissed the complaint, allowing him to resume work.

Bitar had issued an arrest warrant for Hassan Khalil on Tuesday morning when the former finance minister failed to appear for questioning. In the afternoon, a contentious cabinet session was adjourned prematurely after ministers reportedly could not agree on whether to take a position on Bitar’s handling of the investigation.

In the evening, Hassan Khalil appeared on Al Mayadeen and said the Shiite ministers may resign if the cabinet does not make a “proper decision” about the blast investigation. A mass resignation of Shiite ministers could spell the end of Mikati’s government.

On Wednesday afternoon, hours before the cabinet was due to reconvene to continue its discussion on taking a position on Bitar, the session was abruptly postponed. A source at the Presidential Palace told L’Orient Today the reason for the postponement was that the ministers had been unable to reach an agreement regarding the measures they would take prior to the meeting.

The protest near the Beirut Justice Palace was called “to demand the end of the politicization of the Beirut port blast probe,” the Hezbollah spokesperson told L’Orient Today.

Following the protest’s announcement, had Geagea called for a “peaceful general closure” should Bitar be removed “by force.”

Contacted after the shootings, an LF spokesperson told L’Orient Today that the party had nothing to do with the violence that took place.

A party official at the Lebanese Forces office in Geitawi also denied that the party had a role in the shootings.

“Our project is for the judiciary to take its course and continue the investigations and arrive at justice in this explosion that destroyed all of our lives and we stand with the victims' families in their demand for the truth,” he said. “We want this as children of the [damaged] area here.”

The year-long investigation into the devastating explosion that killed more than 200 people was previously suspended for seven days in response to a pair of lawsuits filed at the Beirut Court of Appeals by Khalil and Zeaiter, and MP Nohad Machnouk (Future/West Beirut). The probe resumed on Oct. 5 after the appeals court panel unanimously ruled it lacked jurisdiction over the case and fined the MPs for bringing it.

Bitar is the second judge to lead the investigation, after the first judge, Fadi Sawwan, was removed in February following similar complaints from politicians.

BEIRUT — At least six people died and more than 30 others were injured after shooting broke out during a protest organized by political parties that have criticized lead Beirut port blast investigator Tarek Bitar and what they describe as his “politicized” handling of the investigation.The initial exchange of fire escalated into an hours-long street battle that raised fears of a descent...