Despite promises of equity, some refugees and migrants have been denied the COVID-19 vaccine 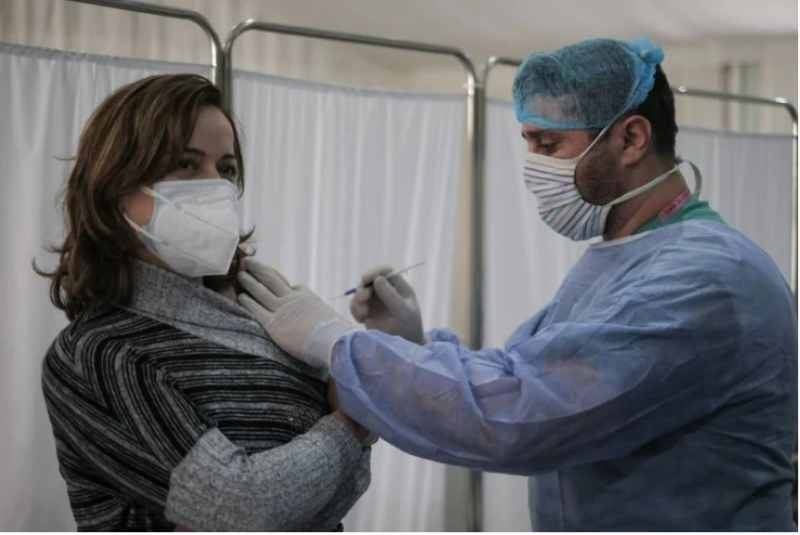 A woman gets the COVID-19 vaccine during the vaccination campaign rollout in February 2021. (Credit: João Sousa/L’Orient Today)

BEIRUT — Despite official promises that COVID-19 vaccines would be available to all residents of Lebanon without discrimination, some refugees and migrants in Lebanon have been denied access to the inoculation over immigration status or documentation issues.

More than 1.7 million people, or about one third of Lebanon’s population over the age of 12, have received a first dose of the COVID-19 vaccine to date, with about 27 percent having received a second dose, according to Health Ministry statistics.

Access to the vaccine has been gradually extended to younger people since the national vaccination campaign launched in February, and Health Minister Firass Abiad has said that he hopes to pick up the pace of inoculation to avoid another surge in cases following the return of students to schools.

However, while health officials have called for a push to ensure that as much of the population as possible is vaccinated, regardless of nationality or immigration status, some non-Lebanese citizens say they have been turned away for being unable to present valid residency documents.

“I registered two months ago and I got an appointment,”a Syrian refugee living in the Metn area, wh0 spoke on condition of anonymity, told L’Orient Today. “When I reached the hospital, the nurse asked me to show my residency papers, although I had shared with her my ID if she wanted to make sure that I am the same person who had registered.”

At the time, he said, his residency had expired because he had been unable to afford the LL300,000 fee to renew it. Later, he was able to scrape up the money for renewal and has since taken his first vaccine dose, he said.

“I feel like I was denied a very basic right to health,” he said.

Anas, another Syrian refugee, said he had encountered a similar issue when he showed up for his vaccination appointment two months ago. He has legal residency in Lebanon but had handed over his documentation to the French embassy in Beirut, where he has a resettlement case pending.

“I had calculated all the logistics and was trying to take the vaccine to have more chances in traveling,” Anas said.

He recalled that he had received several messages from the United Nations refugee agency encouraging refugees to register on the government-run Impact platform to get an appointment for the vaccine.

After registering on the platform and receiving an appointment, he said, “I was excited to actually get the vaccine.”

But when he showed up at the scheduled time at Al Iman Hospital in Aley, he said, “I was surprised that the nurse asked me to show my residency papers, although I showed her my ID in case she wanted to do some verification.”

Officially, there is no policy restricting the vaccine to those with valid residency in Lebanon. Charbel Nehme, an administrator with the Impact platform, told L’Orient Today that the only reason the platform included questions about nationality in the registration form was for the nurses to have a reference to make sure that the patient who appeared for an appointment was the same person who had registered.

“Nationals and non-nationals should both be treated equally, and an ID or any document showing the person’s identity should do, regardless of their residency status,” he said.

Tying vaccination eligibility to residency would prevent the vast majority of refugees from receiving the shot, as the UN vulnerability report on Syrian refugees in Lebanon, conducted earlier this year, found that only 16 percent of refugees over the age of 15 had legal residency.

“My employer is not able to pay me my salary, so how would he be able to now renew my residency documents?” a 27-year-old Syrian worker living in Barbour told L’Orient Today explaining why he couldn’t show renewed papers to the hospital he went to to get the shot, and is left now unvaccinated.

International organizations, some of which are funding Lebanon's vaccine drive, have also called for the global vaccination campaign to be blind to immigration status.

United Nations agencies and human rights groups issued guidance that national governments should prioritize groups for vaccination based on vulnerability and should “provide equitable access to COVID-19 vaccination for all migrants and their families on a non-discriminatory basis, regardless of their nationality and migration status.”

And when the World Bank-funded vaccination campaign was launched in Lebanon in February, the Bank’s regional director, Saroj Kumar Jha, insisted that the $34 million in financing for the vaccine drive was tied to equitable access for all nationalities, as “no one is safe until everyone is safe.”

United Nations agencies serving Syrian and Palestinian refugees in Lebanon made a push to encourage them to register.

Contacted for comment on the issue, Health Minister Firass Abiad referred L’Orient Today to Eid Azar, head of the executive vaccine committee, who could not be reached for comment.

A representative of Rafic Hariri University Hospital who spoke on the condition of anonymity told L’Orient Today that sometimes the staff receiving patients with appointments for their inoculations have been asking for their residency papers, although this is not a requirement set by the hospital or the government.

“This is to ensure that the priority is for the people who are living in Lebanon and not here temporarily and then leaving,” he said.

Aya Malaeb, a staffer on Al Iman Hospital’s vaccination desk, said that the requirement to show residency documentation was set to ensure that the refugee is currently living in Lebanon. She said that, while not a formal policy, the Health Ministry had previously urged hospitals to ask migrants and refugees for their papers but added that the ministry had recently changed its stance.

“This was an internal circular between the hospitals and the ministry, and about four days ago, they asked us to confirm via ID and no longer asked for residency papers,” she said.

Human Rights Watch researcher Aya Majzoub told L’Orient Today that an individual’s immigration status should have no bearing on their ability to access the vaccine.

“We were very encouraged by the government’s announcement that everyone in Lebanon could register to receive a vaccine regardless of their residency status,” Majzoub said. “However, it has been disappointing to hear of migrants and refugees being turned away at hospitals for being unable to provide proof of residency.”

She added that government officials should be encouraging migrants and refugees to get the vaccine and monitoring hospitals to ensure that no one is unable to get inoculated due to their residency status, for public health as well as human rights reasons.

“The virus does not discriminate, and neither should states’ vaccination policies,” she said.

BEIRUT — Despite official promises that COVID-19 vaccines would be available to all residents of Lebanon without discrimination, some refugees and migrants in Lebanon have been denied access to the inoculation over immigration status or documentation issues.More than 1.7 million people, or about one third of Lebanon’s population over the age of 12, have received a first dose of the COVID-19...