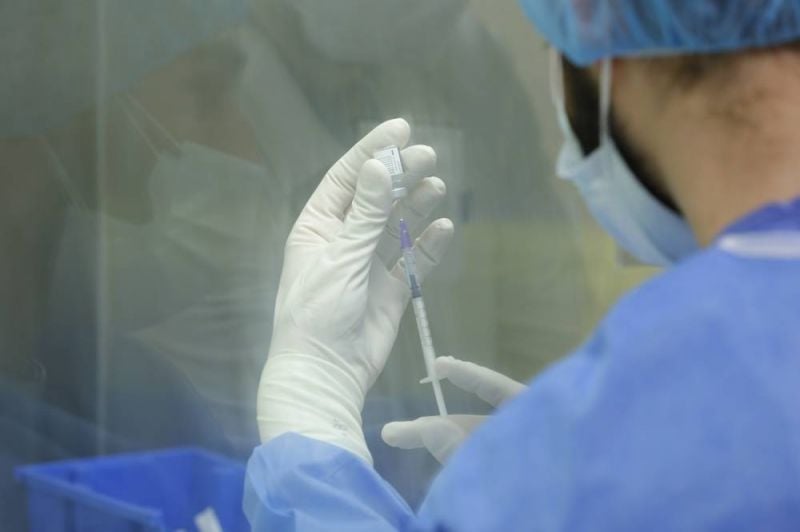 Experts worry Lebanon’s most vulnerable could be left behind in the COVID-19 vaccination campaign. (Credit: Marc Fayad)

BEIRUT — At the launch of the national campaign for COVID-19 vaccinations earlier this month, health officials insisted that all residents of Lebanon would have equal access to inoculations, regardless of nationality.

The World Bank’s regional director, Saroj Kumar Jha, has said on multiple occasions that the $34 million in financing reallocated to fund COVID-19 vaccines is tied to equitable access to vaccines, as “no one is safe until everyone is safe.”

However, just 10 days into the vaccination campaign, data suggests that Syrian and Palestinian refugees are not registering or receiving vaccines at the same rate as Lebanese nationals, raising concerns that some of Lebanon’s most vulnerable populations may be left behind.

“The way the vaccination rollout has been managed so far is raising a lot of red flags,” Nasser Yassin, a professor of policy and planning at the American University of Beirut and co-chair of the AUB4Refugees initiative, told L’Orient Today. “If there is no transparency in the campaign, there is a concern that refugees will be left behind.”

The nationwide vaccination rollout was embroiled in controversy this week after it emerged that MPs, parliamentary staff, the president and his entourage received the vaccine outside officially designated centers, while thousands of elderly people across the country are still awaiting their invitation to book an appointment.

Underrepresented in the vaccine rollout

Registration for the COVID-19 vaccines across all groups has been muted, with only 760,831 people registered so far, according to data published by the Central Inspection Bureau’s Impact platform. However, it is disproportionately low among Syrian and Palestinian refugees.

As of Thursday, 10,973 Palestinian and 8,260 Syrian nationals had so far registered to receive the COVID-19 vaccine, respectively making up 1.5 and 1.13 percent of the total registered population, significantly less than the proportion of the overall population that they represent.

There has not been a census in Lebanon since 1932, meaning that population statistics are estimates.

These groups represent a minority of the total population of Lebanon, estimated by the Central Administration of Statistics to be 4.8 million, while the World Bank puts it at 6.9 million. But regardless which estimate is used, both Palestinians and Syrians are considerably underrepresented when it comes to signing up to be inoculated.

“The registration numbers among Syrian and Palestinian refugees in Lebanon are very low, signaling a lack of awareness around the process and a lack of trust in the Lebanese government,” said Aya Majzoub, a Lebanon researcher at Human Rights Watch. “The latest scandal around politicians jumping the vaccine line will only serve to further decrease trust in the government and its plan.”

Similar patterns are reflected in the number of appointments for members of these populations. From 51,851 total of appointments made via the Impact platform, 928 were given to Palestinians (1.79 percent) and 262 to Syrians (0.51 percent).

“Pandemics do not respect any borders and they do not discriminate,” said Hoda Samra, the spokesperson for the UN’s Palestinian refugee agency, UNRWA. “If you want to reach immunity for everyone, you have to offer the vaccine to everyone living here.”

Vaccinations are widely viewed as the only hope for a way out of the COVID-19 pandemic, with health officials in Lebanon aiming to vaccinate at least 70 percent of the population within a year to achieve herd immunity — where enough people are protected that the virus is no longer able to spread.

While vaccines’ effect on transmission is not yet clear, they have been found to significantly reduce the severity of illness and prevent hospitalization and death.

On average, Palestinian and Syrian refugees are dying from COVID-19 related illness at higher rates than the rest of the Lebanese population, making it even more vital for them to be vaccinated.

Since the first case of COVID-19 was reported in Lebanon in February 2020, 6,574 cases of coronavirus have been recorded among Palestinian refugees, and 212 have died. Among Syrians, 3,046 cases were recorded and 128 people have died.

When discussing the higher mortality, Dalal Harb, a communications officer at UNHCR, pointed to the poor living conditions faced by many refugees.

According to UNHCR’s 2020 vulnerability assessment of Syrian refugees living in Lebanon, nine out of 10 refugee families are living under the extreme poverty line, with the COVID-19 pandemic exacerbating existing economic hardship and limiting access to income.

“We are aware of instances where Syrian refugees were late in seeking health care … which could also explain a higher mortality rate than the national average,” Harb said.

Among Palestinians, Samra attributed the higher mortality rate primarily to overcrowded conditions in the camps where most refugees live and poor health among the population.

“Chronic diseases such as cardiac disease, pulmonary issues and diabetes are relatively high among refugee communities,” she continued. “These are also perhaps tied to bad living conditions, lack of ventilation and extreme stress.”

To try and boost registration among refugees, UNHCR and UNRWA have launched awareness campaigns among their respective communities, with teams on the ground, WhatsApp messaging and social media campaigns.

However, despite Lebanon being in talks to obtain COVID-19 vaccines since the autumn, it was only a couple of weeks ago that awareness campaigns on the vaccine began in earnest.

Majzoub said that some refugees had told Human Rights Watch that they were surprised that they were included in the program and unaware that they could register even if they did not have residency in Lebanon. Others expressed fear of registering because they lacked legal residency and were afraid of being targeted for arrest or deportation.

“We need to make sure that all refugees have the information they need to make an informed decision around the vaccine,” Harb said.

However, she continued, reaching all of the refugees living in Lebanon will be a “gigantic task,” adding that UNHCR teams are continuing to work on identifying the best strategies for accessing refugees in remote areas.

Getting the information to those who need it, particularly those without access to mobile devices or the internet, becomes an additional challenge during the pandemic due to concerns over social distancing and precautionary measures.

“We are trying to develop a safer and more interpersonal way of helping people register, but we don’t want people to gather,” Samra said.

The teams are also faced with the task of countering misinformation and vaccine hesitancy.

“There is still a large amount of misinformation around the vaccine,” Samra said, explaining that UNRWA teams are collecting information on false ideas around vaccines and developing answer sheets with health professionals to address them.

Meanwhile, the vaccination campaign continues to roll out slowly, with only around 4,000 doses being administered per day.

In a report from AUB’s crisis observatory released on Monday, Yassin and colleagues said that if the pace of vaccinations were to continue at the current rate, Lebanon would not reach herd immunity before 2025.

“We are getting way ahead of ourselves if we are celebrating what has happened so far,” he said. “There are big questions about equity and whether those who need it most will get access.”

BEIRUT — At the launch of the national campaign for COVID-19 vaccinations earlier this month, health officials insisted that all residents of Lebanon would have equal access to inoculations, regardless of nationality.The World Bank’s regional director, Saroj Kumar Jha, has said on multiple occasions that the $34 million in financing reallocated to fund COVID-19 vaccines is tied to equitable...