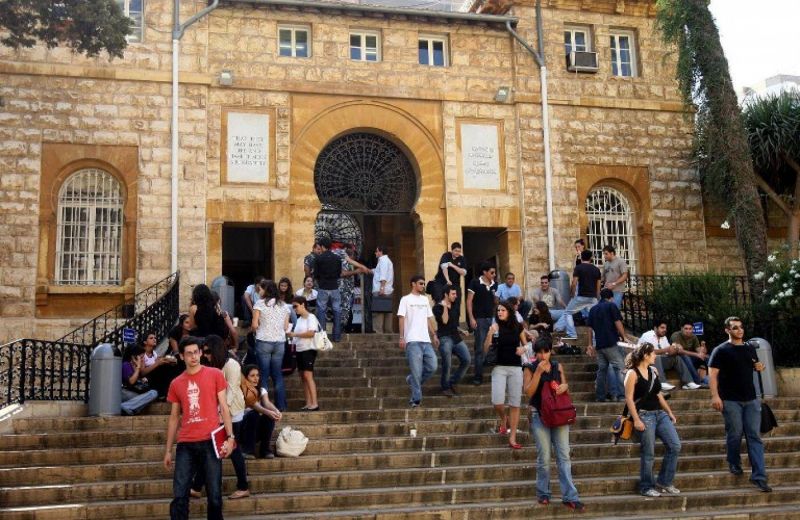 Postgraduate students in Lebanon are bearing the weight of pursuing their degrees amid Lebanon’s collapse. (Credit: AFP)

BEIRUT — Chadi Abdullah, a first-year master’s student in dentistry, often reminisces about his undergraduate years. In those not-so-far-gone days — before the onset of Lebanon’s economic crisis in 2019 — he could dedicate himself to his studies and spend his free time enjoying campus life.

But in the time since, Chadi and students like him have come to juggle not only the concerns of postgrads the world over — the workload, the tuition payments, the job hunt anxieties — but also the weight of pursuing their degrees amid Lebanon’s collapse, branded by the World Bank has likely one of the world’s worst in more than a century.

“I’m struggling with the rising transportation, book and lab equipment prices along with the increased tuition fees, ” says 22-year-old Chadi, who studies at Antonine University.

Over the past two years, Lebanon’s currency has lost more than 90 percent of its value, wages have stagnated and inflation has soared. According to one estimate, more than three-quarters of the population now live in poverty.

Inflation and the inability to keep up with it has bled into every aspect of Chadi’s graduate studies. His program’s tuition? It’s more than doubled — now costing him some LL18.3 million — after the school announced it would assess fees at the “lollar” rate of LL3,900 to the US dollar instead of the official rate of about LL1,500 to the greenback.

The books he had to purchase for classes this semester? LL300,000. “In our major, we also have to buy a tool box [for labs], which alone costs $700 in ‘fresh’ dollars,” he says, or currently about more than LL12 million on the parallel exchange market.

And the price tags keep stacking up.

Chadi says that to afford tuition, he works a full-time job at a dentistry lab. He adds, “Of course my salary is not enough to last me for a whole month.”

Beyond tuition and other school fees, the government has almost entirely ended a subsidy mechanism that once kept fuel prices low, causing the cost of private and public transport to shoot up. Chadi says he now pays somewhere from LL800,000 to LL900,000 a month just to commute between home and work and school.

The cost of a shared taxi — once the predominant means of travel in and around the capital due to the state’s failure to set up a comprehensive public transit network — has shot up fivefold or more to get from his home in Beirut’s southern suburbs to his office in the town of Zalka, just north of the city. Instead he hops on informal vans to shuttle him around, “but even this solution is not affordable anymore,” he says.

“I do own a car but if I were to use it, I would have to pay more than what I pay for public transportation,” Chaid says. “Filling my car up would cost me between LL900,000 and LL1 million.”

Despite the high transportation costs, distance learning is not feasible for Chadi due to the prolonged public-electricity cuts experienced across the country, which render houses without state power for all but a handful of hours each day. Diesel shortages mean that the network of private generators can no longer make up the difference entirely, leading to complete blackouts in some residential areas of Beirut and its surroundings for half a dozen hours a day or more.

When Chadi has had to resort to remote learning in the past, he says, he often skipped classes due to the power shortages. But even when he was able to attend, the crisis was taking an obvious toll on the learning environment.

“The professors are very understanding, and they are open to emailing answers to our questions, but sometimes you have a load of queries and you shy away from asking all of them, especially when the professor is giving you out-of-class time,” he says.

When he has no option but to study at home, Chadi says has taken to paying to print out his online textbooks to study.

On campus, the situation can also feel bleak. Between the hours he spends working full time and then the tedious commute on Lebanon’s informal bus and van network, Chadi often lacks time to prepare proper meals. Still, he takes whatever he is able to whip up with him in his lunchbox because he can no longer afford to buy food near campus.

“Sandwiches that barely satisfy hunger, like small French fry sandwiches, now cost around LL30,000,” he says — a small sum for those with unlimited access to US dollars but a significant cost burden for most Lebanese, whose salaries and savings are in the local currency.

Chadi would have to pay LL750,000 a month — more than the minimum wage — if he were to order off the menu at the local sandwich shop every day.

“Even the university’s cafeteria is closed,” he said, in part because the crisis has caused food prices to skyrocket but also due to the ongoing COVID-19 pandemic.

While Chadi gets help financing his education from his siblings, who live and work abroad, the stress weighs heavily on him. He is forced into a discomfiting routine: work, study, try to find affordable ways of living and repeat. There is no leisure like in his former university days.

“Ever since the economic crisis my friends and I stopped hanging out as often, because the cost of living and going out had increased beyond anyone’s ability to afford it,” Chadi says.

The situation is such that Chadi struggles to see a future in Lebanon once he finishes his master’s studies. His degree, he says, will “increase [his] chances when applying to job opportunities abroad,” which has now become his ultimate goal.

BEIRUT — Chadi Abdullah, a first-year master’s student in dentistry, often reminisces about his undergraduate years. In those not-so-far-gone days — before the onset of Lebanon’s economic crisis in 2019 — he could dedicate himself to his studies and spend his free time enjoying campus life.But in the time since, Chadi and students like him have come to juggle not only the concerns of...