About 6,000 passports have been issued each working day since mid-June — a record number amid the dire situation in Lebanon — with many Lebanese seeking prospects of job offers abroad, wanting to emigrate or making sure to have a passport ready just in case 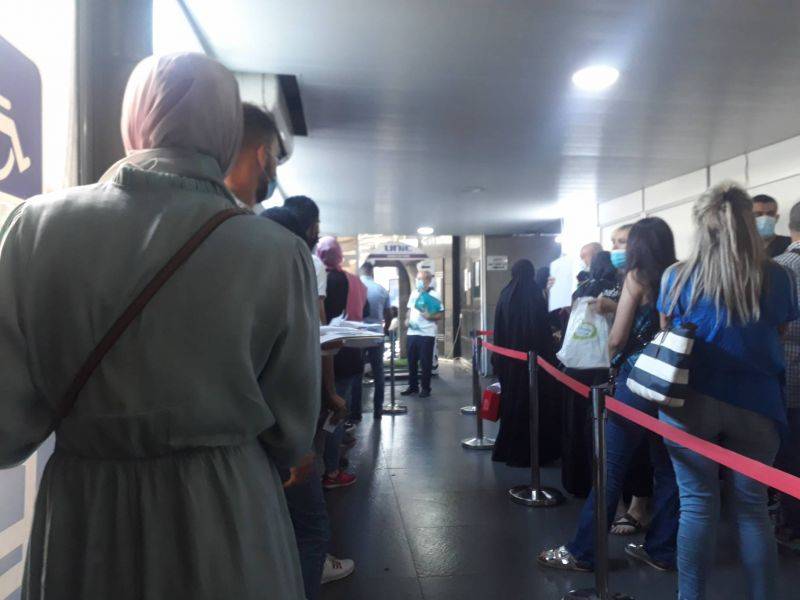 It is 10 a.m. at General Security’s public relations bureau in the neighborhood of the capital surrounding the Beirut National Museum. More than 100 people have come to renew their passport and have been waiting for several hours inside the building.

To secure an appointment, some people arrived at midnight so they can be sure to get their travel documents within 24 hours instead of waiting a week.

Since the start of the crisis that has been rocking the country for two years now, there has been an unprecedented rush for passport applications.

Some seek to get their hands on this precious document to be able to land a job abroad or just pack their bags and leave. Others who have not yet decided to leave the country prefer to be prepared for the worst.

Farah, an expat in her 40s, does not hide her surprise to see the long line in front of the General Security office.

She arrived in Lebanon the day before from Dubai and needs to renew her passport for a new job there. But it looks like it is going to be a long wait for her.

“I arrived in Lebanon last night and went straight to the bureau at 2 a.m. to take a number. But the place was already packed, and I might not get an appointment. It’s really urgent for me,” she says with a tight throat and tears in her eyes.

General Security employees start scheduling appointments around 5 a.m., while the bureau opens its doors at 8.

For an additional fee of LL210,000, applicants in a hurry can get their passport in a day.

“At first, they didn’t want to let me in. I begged the employees. I showed them the job offer and the emails I had with my employer. I even cried,” Farah says.

She continues, “I’ve been looking for work for a year and a half. I don’t know what I’ll do if I don’t get my passport on time. I’m just afraid I’ll be told that some documents are missing. I can’t take it anymore.”

Hundreds of people, like Farah, gather every day outside General Security offices across the country.

Gen. Ramzi Ramy, the head of the agency’s public relations bureau, says applications for passports have increased by 50 percent in 2021 compared with previous years.

“Applications started to multiply at the beginning of April and have recently risen steeply. In the National Museum bureau, we receive 50o people a day on average, whereas it was 250 people a day before,” Ramy told L’Orient-Le Jour.

According to figures provided by General Security, since mid-June the authorities have issued almost 6,000 passports on average each working day throughout the country, distributed as follows: 2,000 passports in Mount Lebanon; 2,500 in the Bekaa, the south and the north; and slightly fewer than 1,000 in Beirut, with 500 passports being issued at the office near the National Museum and some 350 in the Sodeco office.

The Directorate also receives about 400 applications a day via LibanPost.

Lebanon delivered 240,000 passports in the months of July and August alone.

“I applied for a 10-year passport because you never know. It reminds me of the Civil War days. Back then, my husband, my daughter and I had to renew our passports just in case we had to leave. At the time, everyone did this as a precaution,” she recalls.

Joe, 40, finished all the procedures a few days ago to be able to travel to Europe for a short stay, but he is also planning to start an emigration application soon.

“I got there at 3 a.m. and waited for a number. It’s absurd to have to go to General Security at dawn, but I figured it had to be part of the process. My appointment was set at 9 a.m.,” he told L’Orient-Le Jour.

“I am seriously considering emigrating. I will start the process soon. That’s why I need a valid travel document,” he adds.

‘You have to have connections for everything’

While passport applications are on the rise, Ramy said a large number of people, including those who have made expedited requests, have been slow to collect their passport.

“About 40 percent of applicants do not pick up their passport right away, which could suggest that they are only doing the legwork to ensure a valid traveling document. It takes some people a week or a month to come pick it up,” Ramy explained.

He added, “We estimate that 10 percent of passport applicants have emigrated as a family.”

To cope with the large number of incoming applications, General Security has tightened the procedure for passports issued in 24 hours.

“We have asked people to present plane tickets to show they were really traveling, but some are showing up with fake bookings,” Ramy said.

He also called on people who do not urgently need a passport to complete the formalities in their areas of residence.

The General Security official also said passport prices will not increase, because these are set by Parliament as part of its annual budget.

“Contrary to rumors, there are enough paper and cards to issue new passports,” he said.

According to Ramy, the current bottleneck to get a new traveling document can be explained by the fact that “the biometric passport was launched five years ago, and people who had obtained a five-year passport are now obliged to renew it.”

“There are also students who are traveling abroad, and they usually start preparing their papers during the summer. Many expatriates also spend the summer in Lebanon and take the opportunity to renew their passports,” he said.

This is the case of Hassan, a man in his 50s, who has been based in Africa for many years and is in Lebanon for vacation. He decided to renew his and his children’s passports while visiting home.

“I live in the south and came all the way to Beirut at 1 a.m. When I arrived, there were already some 200 people waiting. Those who got there later did not get an appointment,” he says.

“I have been scrambling for two weeks to get the necessary documents. You have to have connections for everything,” he adds.

It is 10 a.m. at General Security’s public relations bureau in the neighborhood of the capital surrounding the Beirut National Museum. More than 100 people have come to renew their passport and have been waiting for several hours inside the building.To secure an appointment, some people arrived at midnight so they can be sure to get their travel documents within 24 hours instead of waiting a...