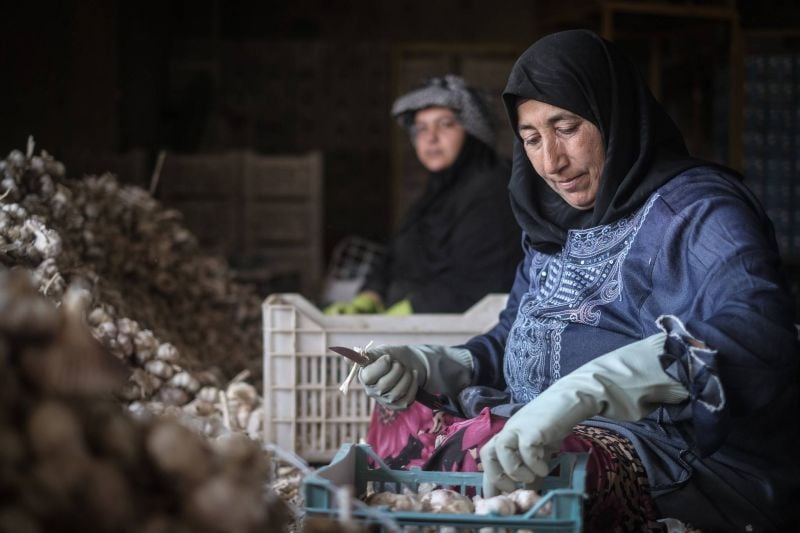 Typically stocks of agricultural produce turn over quickly at this time of year, but with the Saudi produce ban still in place they are now slow to move. (Credit: João Sousa/L’Orient Today)

SAADNAYEL, Zahle — Nearly five months after Saudi Arabia announced a ban on Lebanese fruits and vegetables, the summer harvest has passed, the fall one is beginning and many farmers are left with surplus product, debts and few options.

Some are selling their excess produce on the local market on the cheap. Others are paying a premium to put their product in cold storage — an option that is not always available, given the shortage of fuel to keep refrigerators running — in hopes that the lucrative Gulf market will open back up or local prices will rise.

Still others have found a workaround: they are having their produce smuggled into Syria, where Syrian traders buy it and export it to the kingdom.

Despite being under international sanctions — and despite the fact that some Lebanese officials alleged that Syria was the actual originator of the shipment of amphetamine-filled pomegranates that prompted the kingdom to ban Lebanese produce in April — Syria is not banned from exporting fruits and vegetables to Saudi Arabia.

“A lot of the Lebanese produce that is in areas close to the Syrian border is being smuggled into Syria and is being exported under the name of Syrian traders and entering the market of the kingdom,” Ibrahim Tarshishi, head of the Bekaa Farmers’ Association, told L’Orient Today. “I don’t know exactly what quantities, but it is happening.”

For the farmers who are unable or unwilling to take advantage of this route, the other options are limited. 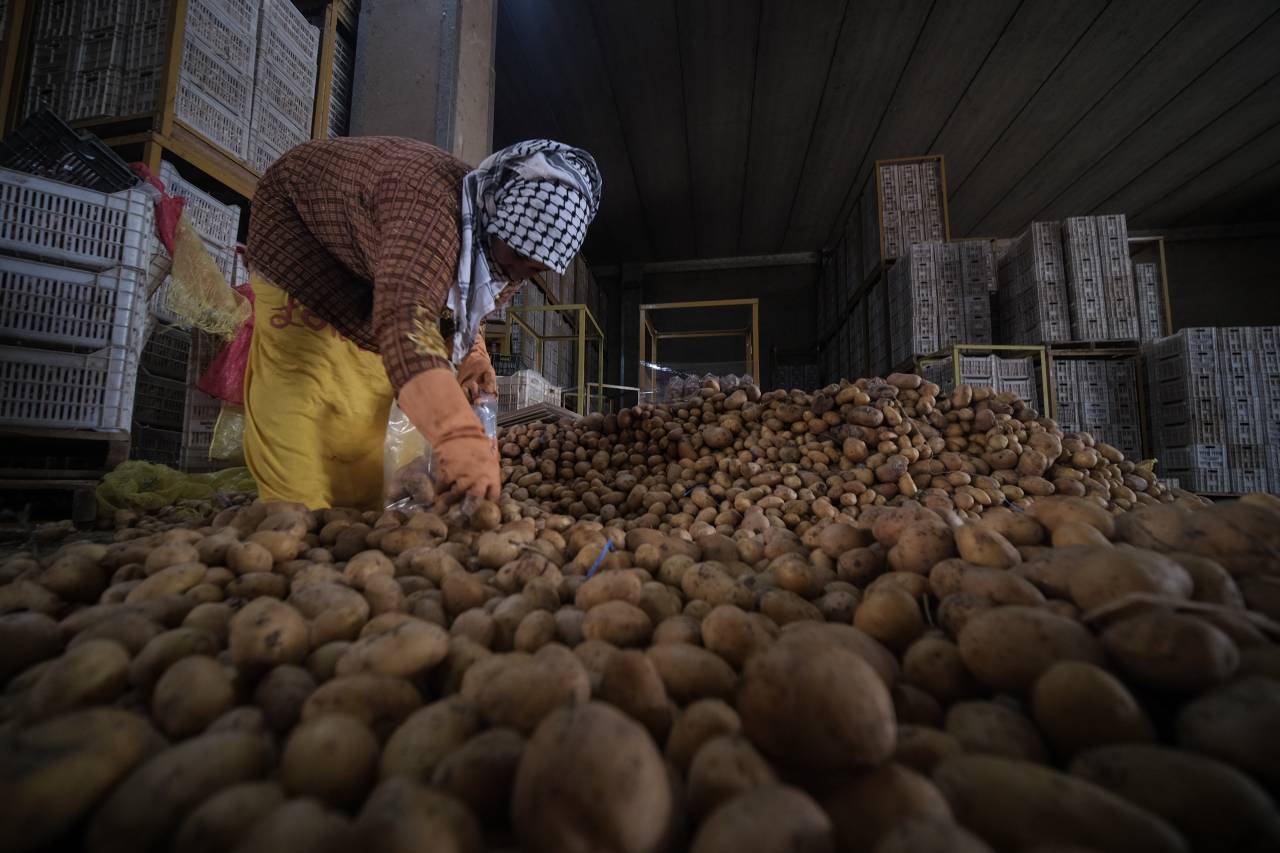 In normal times, stocks of produce would turn over quickly, but because of the Saudi ban on Lebanese produce much of the product has been sitting for two months or more, stacked floor to ceiling in warehouses. (Credit: João Sousa/L’Orient Today)

At the Saifan facility in Saadnayel, which packs and stores agricultural products, cold storage manager Khaled Habib pointed to warehouse rooms stacked floor to ceiling with sacks of potatoes. In normal times, he said, the stocks of produce would turn over quickly; now, much of the product has been sitting for two months or more.

“Every week, for instance, we would gather 100 or 200 tons and transport them and send them out for export,” he said. “Now the borders are closed, there is nothing … We have a lot of produce that has been here from the beginning of the season to now, and it will remain even longer.”

Already, the quality of the product will suffer from spending a lengthy period in storage, Habib said. If the company is no longer able to secure enough diesel to keep its generators going — which requires about 48 20-liter tanks a day — he said, “The product may be thrown out.”

After the Saudi ban was announced in April, officials promised stepped-up anti-smuggling measures and expressed hopes for a diplomatic resolution that so far has not come about. It remains unclear whether the formation of a new cabinet will have an impact on the Saudi stance. Incoming Agriculture Minister Abbas Hajj Hassan, a journalist by trade, could not be reached for comment.

What is clear is that the loss of the Gulf market represented a major blow. In 2020, according to a report by the Chamber of Commerce, Industry and Agriculture of Beirut and Mount Lebanon, Saudi Arabia was the top market for Lebanese agricultural exports, taking some $33 million in product, or about 14 percent of the total agricultural exports coming from Lebanon.

The Gulf as a whole accounted for more than 40 percent of Lebanon’s agricultural export market. While other Gulf countries have not imposed their own bans, the Saudi move has essentially knocked the whole market out, as the kingdom has blocked the transit route for trucks carrying Lebanese produce to other countries in the Gulf. The alternative, sending shipments by sea, is prohibitively expensive and takes upwards of 18 or 20 days compared to less than a week by land, Habib noted.

A spokesperson for Lebanon’s Agriculture Ministry did not respond to requests for comment, and other sources could not provide statistics regarding exports from Lebanon in the months since the Saudi ban. Data available from Customs and from the Chamber of Commerce cover only the first quarter of 2021.

Anecdotally, farmers and analysts said that increased imports by Egypt and Iraq have made up some of the gap left by the Gulf market, particularly for fruit products.

Riad Fouad Saade, the director of the Lebanese Center for Research and Agricultural Studies, told L’Orient Today that with regards to the summer fruit crops, “what has been really saving [the farmers] is the market of Egypt.” However, he added, “When it comes to potatoes, onions etc., the markets are still not clear.”

“The farmers are finding their way,” he said. “The problem is that the value of the crop has not readjusted to the inflation of the Lebanese lira to the dollar, so their purchasing power in dollars is less.”

Meanwhile, farmers who spoke to L’Orient Today said the increased Egyptian imports have not made up all the difference and cannot match the Gulf prices. 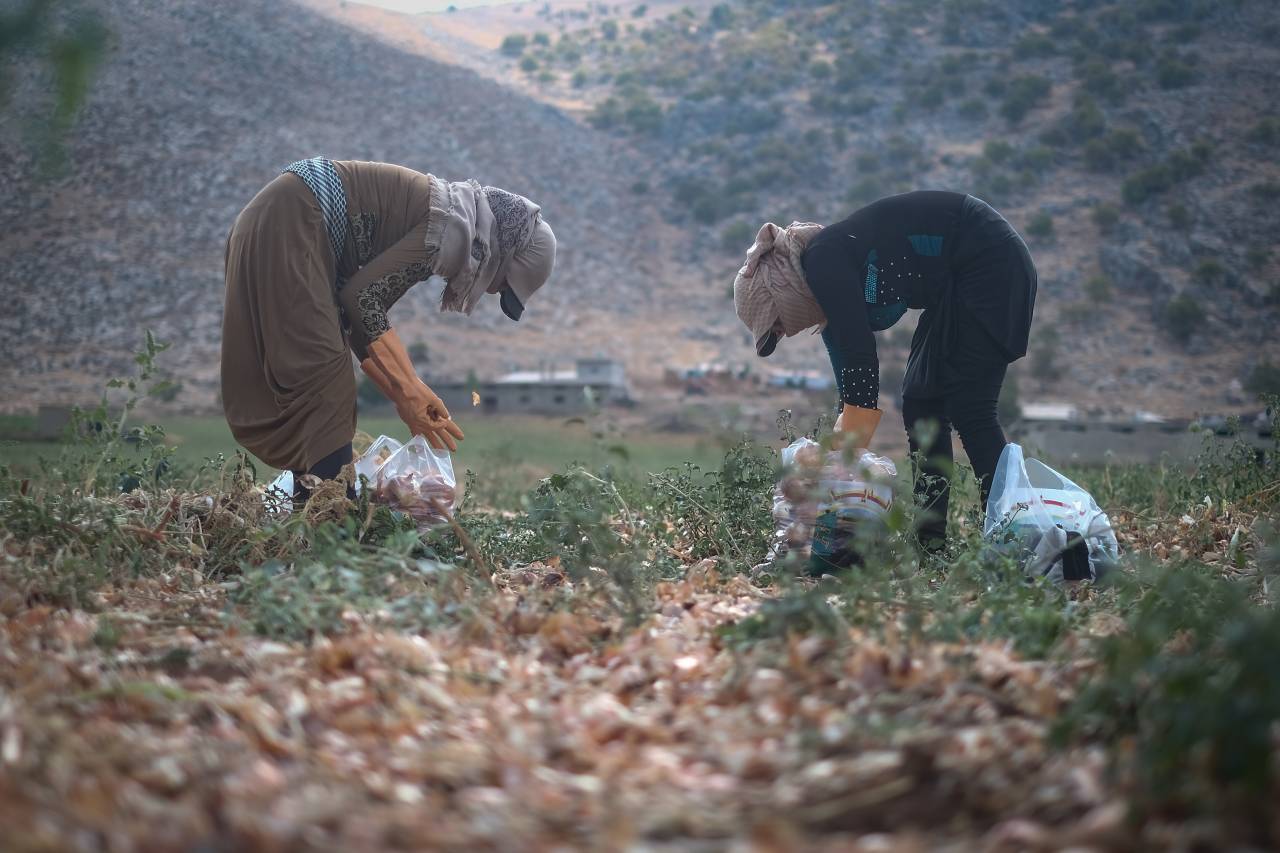 With the overland market to the Gulf blocked, sacks of onions from one Bekaa village are selling at a loss in the local market due to the depreciation of the lira. (Credit: João Sousa/L’Orient Today)

In the village of Sultan Yaacoub, known as “Lucy” by its residents, farmer Ali al-Jaroush supervised a group of workers harvesting onions and stuffing them into 14-kilogram bags. With the overland market to the Gulf blocked, the sacks are bound for the local market, he said, where they are worth about $1 apiece at the current market exchange rate.

“Our expenses are all in dollars, and today we are selling a kilo of onions for 7 cents. It costs us 10 cents to produce and we are selling it for 7 cents,” he said. “The local market is not able to take in all of our produce …. If there were exports, the situation would be better, because there would be less surplus in the local market, the product would be divided between here and there, and prices would go up.”

The Saudi export ban came at a time when farmers like Jaroush were already facing an existential threat due to the country’s currency crisis; with inputs like seeds, fertilizers and, now, black market fuel, priced in dollars, the prices they can sell for on the local market do not cover expenses.

“In the export market, you are getting fresh dollars. When you get fresh dollars, you are able to pay the expenses that you are also paying in dollars,” said Chamel al-Jarrah, a farmer and agricultural engineer from the Bekaa town of Marj. “Now we are not getting any dollars [in income], and three-quarters of the expenses are in dollars.”

The problems, he added, have been compounded since in some areas, cold storage facilities have shut down due to lack of fuel leaving farmers with no alternative but to dump their products on the local market.

“The traders are coming and exploiting them, offering very low prices,” he said.

In the mountains of Akkar, although the apple harvest season should have begun, many farmers have not yet started to pick their wares, because there is nowhere to send them.

“In our area up there, we have about 1 million [25-kilo] boxes of apples, and the traders will not buy that much,” said Omar Taleb, the owner of a cold storage facility in the area of Mishmish that is currently closed while he waits to get fuel. “The local market can’t take all the apples that are present just in our area, so what about Bsharri and Ehden and Mount Lebanon?”

With agriculture becoming an increasingly losing proposition, many farmers cut back on planting this year.

“We reduced planting by about 50 percent to be able to reduce our losses,” said Jaroush. If the situation does not improve, he said, “I’m thinking of leaving Lebanon, not just to stop planting.”

SAADNAYEL, Zahle — Nearly five months after Saudi Arabia announced a ban on Lebanese fruits and vegetables, the summer harvest has passed, the fall one is beginning and many farmers are left with surplus product, debts and few options.Some are selling their excess produce on the local market on the cheap. Others are paying a premium to put their product in cold storage — an option that is...