Roads blocked as Lebanese worry over fuel and plunging currency 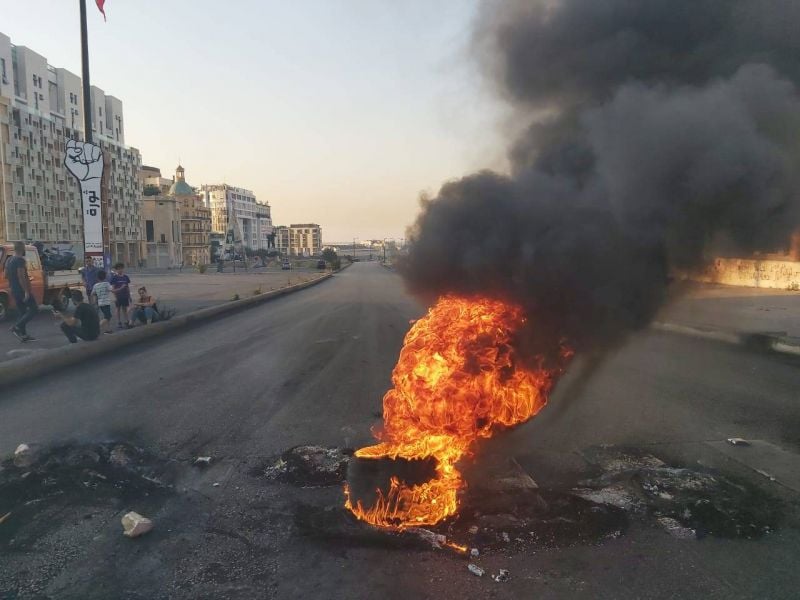 BEIRUT — Small-scale protests and roadblocks broke out in numerous locations across Lebanon on Saturday amid a looming hike in the price of fuel and the continued plunge of the lira to record lows.

By Saturday evening, parallel market exchangers were selling dollars for LL17,650 and buying them for LL17,550 according to exchange rate apps. This amounts to a 26 percent depreciation since the beginning of June and a 91 percent drop since the lira first began to unravel from its official peg in 2019.

In the capital, several scattered roadblocks appeared throughout the day, including briefly in Martyrs’ Square and the Ring Bridge — two locations that were focal points during the October 2019 uprising. Protesters also cut off roads with burning tires and overturned dumpsters in Corniche al-Mazraa, Raouche and Jnah.

Roadblocks were also set up in Nabatieh, Saida, Baddawi, Akkar, Sur, Zahle, Baalbeck and Zouk Mosbeh. In both Nabatieh and Saida, small groups of protesters staged sit-ins in the cities’ main protest squares.

“We are hungry, we are tired, we are suffocated. What more can I say,” one man told TV channel Al-Jadeed from the airport road south of Beirut.

At least twelve people were reported injured during protest-related incidents.

In Saida, six protesters were injured in clashes with soldiers who were attempting to clear them from the city’s Martyrs’ Square. Photographs obtained by our sister publication L’Orient-Le Jour show an apparently injured man being carried away and a young woman with blood streaming down her face.

Later in Saida, a handful of protesters broke through the front gate of the central bank’s offices into the courtyard and hurled rocks at the building. Others targeted the local branch of the state electricity company and the local water establishment.

In Tripoli, demonstrators lit a fire outside city hall and attempted to break in, amid other protest actions. As protesters toured the houses of local MPs in the evening, guards of Mohammad Kabbara (Future/Tripoli) reportedly opened fire. The state-run National News Agency said that the sounds of gunfire were followed by brief panic before the Lebanese Army moved in to push protesters back.

A representative of the Tripoli-based Emergency and Relief Corps told L’Orient Today that at least four people suffered minor injuries to their arms and legs during the evening’s protests. The injuries were not caused by gunfire and did not require hospitalization, but were treated on scene. The representative could not confirm where in Tripoli the injuries had occurred.

Two people were also wounded by gunfire earlier in the day in Tripoli in a fight after protesters attempted to force a fast food shop owner to close his doors. Businesses across the city, and in Saida and Marjayoun shut down as the value of the lira continued to fluctuate.

The display of public anger comes ahead of the expected announcement on Monday of a hike in fuel prices.

On Friday, caretaker Prime Minister Hassan Diab approved the import of fuel at a rate of LL3,900 to the dollar, rather than the official rate of LL1,507.5, as an attempt to ease shortages and pressure on gas stations.

Since 2019, the central bank has been providing importers of basic goods with US dollars at the official rate to cover the majority of their goods invoices. However, with Banque du Liban’s foreign currency reserves reaching critical levels, importers say it is failing to make payments on time, leading to shortages and long lines at gas stations.

It is unclear exactly how much prices will rise. However, Fadi Abou Chakra, the head of the fuel distributors’ syndicate, previously told L’Orient Today that assuming tariffs and commissions are left unchanged, the price of 20 liters of 95-octane gasoline would reach about LL60,000.

Earlier in the day, drivers of public vans blocked the Awali bridge north of Saida in protest against the lira’s deterioration and the expected fuel price hikes.

An increase to the cost of fuel will also likely translate to a rise in the price of public transport. The head of the taxi drivers’ union, Marwan Fayyad, told L’Orient Today that a ride in a shared taxi, or service, could climb from LL4,000 to LL7,000–8,000.

Update: This story has been amended to include developments in Tripoli, Saida and Beirut on Saturday night.

BEIRUT — Small-scale protests and roadblocks broke out in numerous locations across Lebanon on Saturday amid a looming hike in the price of fuel and the continued plunge of the lira to record lows.By Saturday evening, parallel market exchangers were selling dollars for LL17,650 and buying them for LL17,550 according to exchange rate apps. This amounts to a 26 percent depreciation since the...