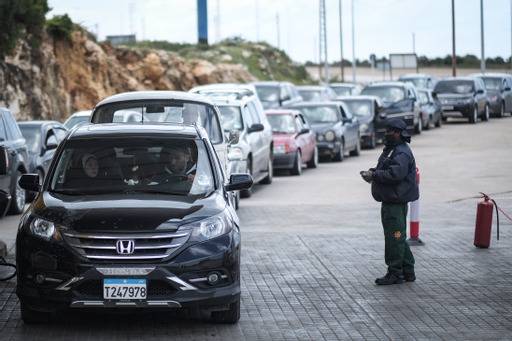 BEIRUT — Motorists again flocked to gas stations across Lebanon on Monday as fears of an imminent end to the country’s subsidy on fuel increased demand for a commodity already in short supply, with payment delays reportedly keeping stocks that should be in stations’ pumps aboard tankers anchored offshore.

Over the weekend and into Monday afternoon, queues extended into streets as drivers waited to fill their tanks.

Long lines formed at gas stations in the southern towns of Saida and Marjayoun, the NNA reported, adding that in Marjayoun, some stations were rationing the amount of fuel sold to customers, while others shuttered entirely.

When their supplies completely ran out, stations in Saida and Nabatieh also closed shop.

Gas stations along the highway linking Beirut to Jounieh also saw long queues of cars lined up, with traffic police called up in some instances to better manage the ensuing jams. In the district of Metn, motorists also rushed to fill their tanks.

“There’s a drop in the number of letters of credit being opened by the central bank to fuel importers,” Georges Brax, a member of the gas station owners’ syndicate and the president of Brax Petroleum, a gas station chain, told L’Orient Today, explaining that this is holding up the delivery of fuel supplies.

With the central bank delaying payments to foreign suppliers and motorists flocking to fill up their vehicles, gas stations’ supplies were put under immense pressure, he said.

“Supply was already running low and the panic further compounded the problem,” Brax explained, adding, however, that the panic buying generated by the belief that subsidies are about to be lifted is based on “unfounded rumors.”

The hold up in paying foreign suppliers on time is causing tankers to delay offloading their cargo. Two vessels are presently anchored off the Lebanese coast awaiting payment, according to both Brax and Ralph Daou, whose family owns a chain of gas stations.

“These two tankers have been waiting for around a week and are carrying some 40 million tons of fuel each,” Brax said.

In a statement issued Sunday, the central bank denied any payment delays, saying it is committed to selling “dollars to banks at the official exchange rate for raw materials that the government decided to support.”

The central bank provides importers of essential goods, such as fuel, wheat and medicine, with US dollars at the official rate of LL1,507.5 to the dollar so that they can purchase goods from abroad. This amounts to an effective subsidy on the goods, enabling their providers to sell them to consumers at close to the official rate, despite rampant inflation in the country.

BDL covers 90 percent of the dollar value of fuel imports, with importers reimbursing the central bank the official exchange rate. The importers must cover the other 10 percent by purchasing dollars on the parallel market at the unofficial rate, which is now about LL12,500 to the dollar.

Under the proposal, all subsidies would be eliminated, except those on wheat and medicine, saving the state some $3 billion annually.

Brax, however, believes that, given the complexity of the issue, “in the short term, subsidies won’t be lifted.”

With Diab’s government serving in a caretaker capacity since its resignation in the aftermath of the Beirut port explosion in August, it remains to be seen whether its mandate permits it to pass the law needed to overhaul the subsidies program. Meanwhile, Premier-designate Saad Hariri’s efforts to form a new cabinet remain deadlocked.

Despite the surge in demand for fuel, not all of Lebanon’s gas stations are currently running low on supplies. Stock levels vary from station to station depending on the station’s supplier and how recently it received a delivery. However, both Brax and Daou caution that irregularities in fuel supply will not end anytime soon.

“These are the times we are living in, and people should expect disruptions every 15 to 20 days as any rumor can cause a panic,” Daou said.

To make matters worse, Daou alleges that some gas stations are hoarding supplies in anticipation of an opportunity to make exorbitant profits if subsidies are lifted.

“They’re buying now at a relatively low cost and can sell later at three, four times the price,” Daou said.

“People are filling up their cars, emptying them at home into containers and repeating that process,” Daou said.

This phenomenon is fast turning into a dangerous practice that puts both the hoarders themselves and others at significant risk. Last month, a building in the Tariq al-Jadideh neighborhood of Beirut went up in flames after gasoline unsafely stored on a resident’s balcony was accidentally ignited.

BEIRUT — Motorists again flocked to gas stations across Lebanon on Monday as fears of an imminent end to the country’s subsidy on fuel increased demand for a commodity already in short supply, with payment delays reportedly keeping stocks that should be in stations’ pumps aboard tankers anchored offshore.Over the weekend and into Monday afternoon, queues extended into streets as drivers...