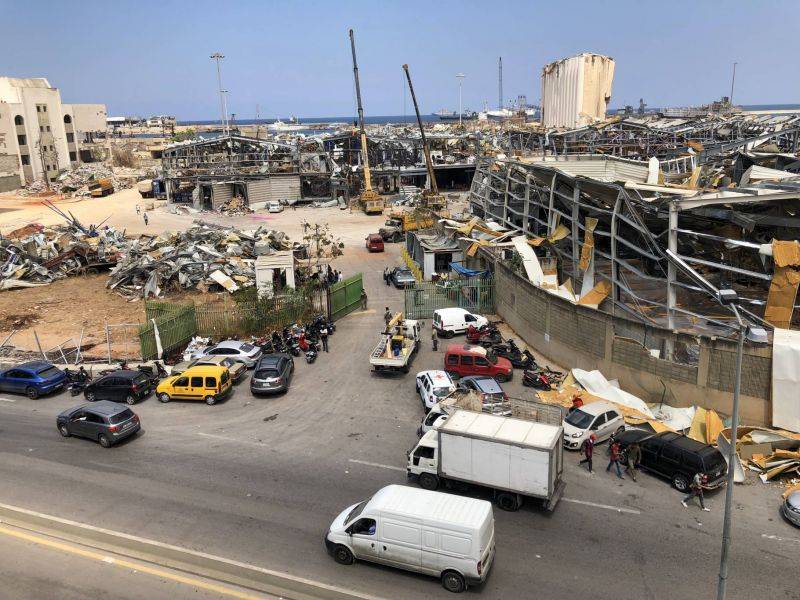 The Beirut port in ruin at the end of summer 2020. (Credit: Philippe Hage Boutros/OLJ)

The Finance Ministry has come under criticism for failing to exempt victims of the Aug. 4 Beirut port explosion from taxes on donations they receive.

In a strongly worded statement released Tuesday, the Lebanese Association for Taxpayers’ Rights denounced Decision 47/1 issued by the Finance Ministry the day prior, which sets up terms related to the implementation of the law on tax exemptions for the victims of the deadly Aug. 4 Beirut port blast.

The association, which goes by its French acronym ALDIC, in particular criticized one provision made by the Finance Ministry, according to the group’s president, tax lawyer Karim Daher.

Daher tells L’Orient-Le Jour that the tax administration is to be admonished for “inventing” provisions, specifically in reference to Article 4 of the decision, which stipulates that donations to the victims of the explosion are now subject to income tax. “We are not criticizing the minister personally, but rather the fiscal administration,” Daher adds.

In this article, the ministry informs taxpayers who are subject to income tax based on profits and who have received donations in cash or in kind in their capacity as victims of the Aug. 4 explosion that they will have to declare the value of these donations as “exceptional income.”

The article adds that “if an individual is subject to taxation on the basis of the flat rate [an annual deduction based on a percentage applied to revenues], the value of the donations received, in cash or in kind, will be considered as part of the income generated by the individual’s activity.”

This requirement is unacceptable for ALDIC, which says that it is not in line with Article 6 of Law 194 of 2020, whereby the victims of the Aug. 4 explosion are exempted from paying any taxes on the donations they receive.

According to the same article, the heirs of the people who died as a result of the disaster are also exempted from paying any inheritance tax.

In short, Law 194 exempts donations from inheritance tax — a progressive tax on bequests and donations exceeding LL1.6 million, which could go up to 45 percent in the event that there is no kinship between the donor and the recipient.

Law 194 does not stop there. It also allows people who donated to the blast’s survivors to deduct the donation amount from their taxable income. The law also exempts affected buildings from taxes on built property through the end of 2021, or until the end of the reconstruction work that started within this framework.

“We campaigned for this law, and even made a proposal which was included in the final text,” says Daher, stressing the need to exempt all humanitarian aid, most of which was contributed by NGOs, foreign states or members of the diaspora, from any compulsory deductions.

According to Daher, this alone is more than enough reason to be outraged by the ministry’s maneuver, which tries to subject donations to income tax in direct “conflict with the spirit of Law 194.”

ALDIC also criticized the decision for allegedly exceeding the power that is normally entrusted to the executive body by making additions and changes to the law, citing the Shura Council’s Decision 636 of 2009-2010.

“Even in normal times, a minister should simply organize the application [of a law] and not modify it,” insists Daher, who fears that this decision will allow the state to intimidate citizens by accusing them of tax evasion, or even money laundering — offenses punishable by at least three years in prison — if they do not declare this “exceptional income.”

L’Orient-Le Jour contacted the Finance Ministry for comment, but the ministry had yet to reply at the time of publication.

The Aug. 4 Beirut port blast, the causes of which remain unidentified despite the authorities’ promises of a rapid and transparent investigation and intervention on the part of several countries and international organizations in this direction, killed more than 200 people and injured more than 6,000.

Several estimates of the damage caused by the explosion have been carried out, but the most comprehensive one is credited to the World Bank joined by the United Nations and the European Union — an initial damage assessment, showing that the explosion caused between $3.8 and $4.6 billion in damage to physical stock, as well as economic losses estimated to be between $2.9 and $3.5 billion.

Prior to the disaster, the country has been grappling with the worst economic crisis in its recent history, marked by a government default on foreign debt, a sharp depreciation of the national currency and illegal banking restrictions.

Even if Lebanon were able to count on strong mobilization from the international community and NGOs, the release of international aid has been obstructed by both banking restrictions and rampant state-level corruption.

The Finance Ministry has come under criticism for failing to exempt victims of the Aug. 4 Beirut port explosion from taxes on donations they receive.In a strongly worded statement released Tuesday, the Lebanese Association for Taxpayers’ Rights denounced Decision 47/1 issued by the Finance Ministry the day prior, which sets up terms related to the implementation of the law on tax exemptions...