Did Syrian jihadists nab a notorious Italian mobster for Italy?

Bruno Carbone, 45, a Neapolitan drug trafficker, was arrested in Dubai according to Italian authorities. Hayat Tahrir al-Sham (HTS), formerly an al-Qaeda affiliated Syrian militia, claims to have captured him in Idlib in March. 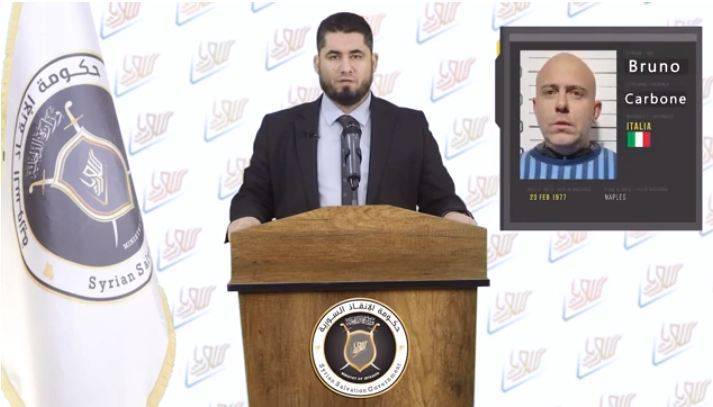 It would have been the ideal hideout — an area where no one, starting with the Syrian regime, would come looking for trouble and where he could put his “talents” to good use.

Bruno Carbone, an Italian mafioso and privileged “broker" of some clans of the Neapolitan Camorra, thought that Syria — the pro-Syrian government areas to be precise — would be the ideal hiding place.

What happened next was incredible, worthy of a Netflix series.

The 45 year old had been on the run since 2003, after an Italian court sentenced him in absentia to 20 years in prison on charges of international drug trafficking.

The right-hand man of Raffaele Imperiale, the “boss” of a Camorra gang arrested in 2021, Carbone was in charge of relations with Colombian cartels and distributing drugs to various Neapolitan mafia clans.

In 2018, Italy’s Anti-Mafia Investigation Directorate seized 240,000 euros in cash from his ex-wife in Campania (southwestern Italy).

On Nov. 15, Carbone was captured. The Italian press reported that the Naples investigation unit arrested him in Dubai. He was using a false identity card.

According to the Italian authorities’ official version of events, Carbone was extradited to Italy the same day and arrested as soon as he got off the plane in Rome.

The story did not end there.

Hours after the Italian announcement, the official Telegram Channel of the internal security forces in the Idlib area, controlled by Hayat Tahrir al-Sham (HTS), announced that it had arrested “one of the world’s biggest drug traffickers.” HTS is descended from Jabhat al-Nusra, the former al-Qaeda affiliate in Syria.

According to HTS, Carbone left Europe for Turkey posing as a Russian national and then entered northwestern Syria, where he was arrested in March 2022.

The fugitive was reportedly “interrogated for months” by the security forces and the Interior Ministry of the HTS-backed Syrian Salvation Government. Then he was “handed over to the authorities of his country, with Turkey acting as a mediator.”

Carbone reportedly presented himself to the Syrians as a Mexican fleeing his country for running a luxury watch business.

According to a statement by HTC internal security spokesman Diya' al-Omar, Carbone considered the regime’s areas “the best safe haven from the law,” where he “could get close to a major source of drug [production] in the world.”

These leaks snowballed on social media on Nov. 15. On the evening of the same day, however, Italian Justice Minister Carlo Nordio reaffirmed the official version and thanked the United Arab Emirates for its cooperation.

“This latest arrest shows a consolidation of judicial cooperation relations between Italy and the United Arab Emirates. In recent times, relations — also thanks to the bilateral agreements in force — have intensified considerably,” Nordio said.

“Several recent cases prove this,” the Minister added. “For this new momentum, I would like to thank my Emirati counterpart Abdallah al-Nouaimi.”

Carbone is believed to have spent much of his time as a fugitive in Dubai. It was there that Italian authorities thought they had found him in December 2020, when the UAE announced the arrest of a Neapolitan businessman, who was released after spending 32 days in prison.

It turned out not to be Carbone.

In August 2021, authorities in Dubai also arrested Carbone’s boss, Raffaele Imperiale, who had been wanted since 2016.

The mafioso’s penchant for expensive paintings was revealed when the police raided his hideout in the village of Castellamare di Stabia, near Pompeii, where they found two Van Gogh works that had been stolen from an Amsterdam museum.

Knowing that the arrest of the Neapolitan businessman, and the apprehension of his “capo” a year later, had compromised his hiding place, Carbone decided to go to Syria, thinking that he would be safer there.

His lawyer – who also represents Raffaele Imperiale — did not respond to L’Orient-Le Jour’s requests for comment.

The story of Carbone’s arrest in Syria by a jihadist group — designated a terrorist group by the United States, the United Kingdom, Canada, and Turkey — could create trouble for Rome.

How can Italy acknowledge having negotiated with HTS to extradite one of its own nationals, even if it was expedited by Ankara’s intervention?

Italian authorities have not yet denied the HTS version of events.

In a bid to reinforce the HTS story Mohammad Abdel Rahman, the Interior Minister of the Syrian Salvation Government, appeared in a video Wednesday projecting a photo of Carbone in a striped convict suit.

The photo has not been authenticated.

“After collecting the evidence, the ministry has started working on the procedures to hand over the criminal to the government of his country,” the interior minister said, thanking the “Turkish side” for facilitating the operation.

HTS is presenting the arrest as a master stroke. HTS communication channels talk about “major security and political success for the organization in the liberated areas [of Syria].”

“The Italian and Emirati authorities were able to arrest 34 people from this mafia gang, but ‘Bruno’ remains the most important missing link.” This arrest was the ‘final act of this gang, unraveled by the security services in Idlib,” Omar, HTS spokesman, said in a statement.

When contacted for comment, HTS's communications officer refered by L’Orient-Le Jour to the Interior Ministry’s statement.

The jihadist group has been trying to improve its image, and local and international opinion, by disowning its former affiliation with al-Qaeda.

This story was originally published in French in L’Orient-Le Jour, translated by Sahar Ghoussoub.

It would have been the ideal hideout — an area where no one, starting with the Syrian regime, would come looking for trouble and where he could put his “talents” to good use.Bruno Carbone, an Italian mafioso and privileged “broker" of some clans of the Neapolitan Camorra, thought that Syria — the pro-Syrian government areas to be precise — would be the ideal hiding place.What...