Six months after Russia's invasion of Ukraine, where does the Arab world stand?

Anticipating an increasingly multipolar world order, most countries in the region refuse to take sides in a conflict that only indirectly concerns them and whose outcome remains uncertain. 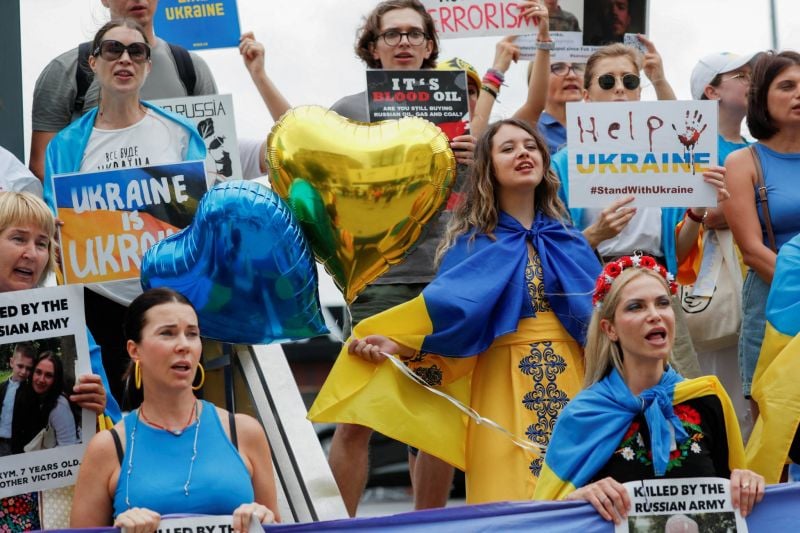 On Feb. 24, the sword of Damocles that Moscow had been waving for months descended upon Kyiv. In response to Russia’s invasion of its neighbor, international support for Ukraine quickly coalesced, showcasing exceptional unity against the Kremlin.

At first sight, the US-led camp seems to have succeeded in mobilizing forces to isolate Moscow, by downsizing diplomatic representation and enacting economic sanctions. But the boundaries of this bloc were quickly identified.

Beyond Europe, North America and a few other countries, the West has failed to rally allies and strategic partners to take a firm line against Vladimir Putin — especially Arab states.

“From the outset, most Arab countries, except for Syria which declared support for president Putin and his war against Ukraine, see this war as neither a threat to their interests nor benefiting them,” said Randa Slim, researcher and director of the Conflict Resolution and Track II Dialogues Program at the Middle East Institute.

Hoping to diversify their alliances, many Middle Eastern states that are close to Washington have so far resisted the US’ pressure to join its camp.

This is because they want to avoid alienating Russia, whose role in the region has been growing steadily in recent years, as well as to affirm their independence in the face of a US ally that does not seem to be interested in their fates.

“The view from most Arab capitals is that it serves no strategic purpose to support NATO's efforts to squeeze, humiliate, and isolate Moscow,” said Giorgio Cafiero, founder and CEO of the consultancy Gulf States Analytics.

That is particularly the case since Russia had strengthened its partnerships in the region, with a trade value of $5 billion with the Gulf Cooperation Council countries in 2021.

Russia has also established itself alongside Saudi Arabia as one of the driving forces behind OPEC+. This position has contributed to Riyadh’s refusal to increase its production in a bid to ease high oil prices, despite repeated US requests to do so.

Present in Libya and Syria, where it intervened in 2015 to save the Bashar al-Assad regime, the Kremlin has also become a key political player in the region.

“There are a fair number of Arab states which see eye-to-eye with Moscow. The outcomes of the conflicts in the Arab world will have a far greater impact on Arab states than the war in Ukraine which doesn't even border a single Arab country,” Cafiero said.

Occasional allies with the Iran-allied groups and Lebanese Hezbollah on the Syrian front, the Russian forces and their Wagner militia have had to give the former their place in some parts of the country, after they partially redeployed since the start of the war in Ukraine.

“Arab governments want Russia to remain strong so it can continue to help contain Iran’s ambitions to expand its influence over the region,” said Middle East analyst Joe Macaron.

“In contrast, Washington is currently focused on deterring and isolating Moscow and is working towards a possible nuclear agreement that might end Iran’s economic isolation,” he added.

Some countries in the region have long disapproved of this policy, including the UAE and Saudi Arabia, fearing that Iran would take advantage of the revival of the 2015 deal to strengthen its regional activities.

These countries, which seethe security guarantees provided by Washington in the face of the Iranian threat as insufficient, have seized the opportunity provided by the Ukrainian conflict to express their dissatisfaction with the continued US disengagement from the region.

“By refusing to align with the West against Moscow vis-à-vis the war in Ukraine, Arab states are sending a message to Washington about their autonomy from the US,” said Cafiero. “The message is that they will pursue strategies based on their own understandings of their national interests rather than automatically back every aspect of US foreign policy.”

“The United States is not going anywhere. We will not walk away and leave a vacuum to be filled by China, Russia or Iran,” he said while in Jeddah on July 16, in an effort to reassure his partners.

Six months after the start of the Ukraine invasion, the issues have remained similar, although the crisis seems to have exacerbated — if not accelerated — the transition to a multipolar international order.

“Arab states are preparing for new geopolitical realities in which Russia, China, and India are more powerful actors in the Middle East and beyond,” said Cafiero.

Maintaining a neutral position is therefore all the more essential for them, since today it remains uncertain what will be the conflict’s results. Kyiv needs more military equipment to be able to launch a counter-offensive before the Russian army rebuilds its forces to enter more territory.

“As Russia gets stuck in Ukraine without a clear victory in sight, it will affect its foreign engagement bandwidth and it will also affect its brand in the region,” said Slim.

As a potential signing of the nuclear deal approaches, this disequilibrium could undermine de-escalation attempts that have prevailed in the region for months.

“Arab regimes do not want Russia’s invasion of Ukraine to invalidate their efforts to rekindle strained regional tensions and trigger a new wave of polarization. They also do not want Russia to experience a major defeat, which would reinforce American unilateralism and make it difficult for them to diversify their alliances,” said Macaron.

This article was originally published in French at L'Orient-Le Jour. Translated by Joelle El Khoury.

On Feb. 24, the sword of Damocles that Moscow had been waving for months descended upon Kyiv. In response to Russia’s invasion of its neighbor, international support for Ukraine quickly coalesced, showcasing exceptional unity against the Kremlin.At first sight, the US-led camp seems to have succeeded in mobilizing forces to isolate Moscow, by downsizing diplomatic representation and enacting...