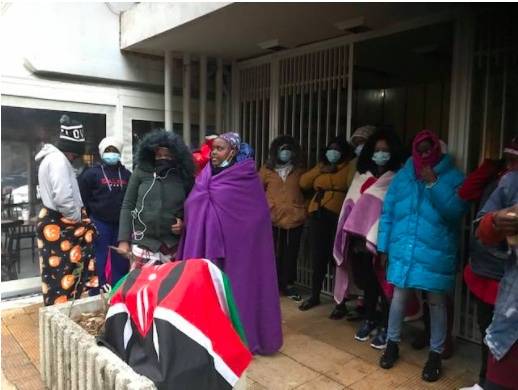 About 30 women camped for two weeks earlier this year in front of Kenya's honorary consulate in Badaro. (Credit: Zeina Antonios/OLJ)

BEIRUT — The harrowing images were shared widely: Kenyan women camping outside their consulate in January, destitute and desperate to go home but stuck in limbo because their passports had been taken from them and the economic nightmare engulfing Lebanon made it impossible for them to raise the funds for plane tickets.

Some of those who had been squatting in the wet cold that characterizes Lebanese winters managed to be repatriated to Kenya, after the International Organization for Migration and several other NGOs held talks with Lebanese authorities and the honorary consulate of Kenya. Around 14 women caught COVID-19 and had to postpone their flight, while the IOM said that 69 other Kenyan women had contacted them, seeking to be repatriated. “We are coordinating with the Lebanese and Kenyan authorities to decide how to assist them,” an IOM source told L’Orient-Le Jour, L'Orient Today's sister publication, at the time.

One Kenyan woman, who wasn’t one of the squatters, nevertheless served as an activist and was almost always the first to speak in front of the TV cameras when they showed up. She relentlessly rallied on behalf of the women, protesting and making sure their voices were heard by sharing their stories with local and international outlets.

Now, she is at “immediate” risk of deportation after being detained by General Security for four months which places her in immediate danger of persecution in Kenya, according to Lebanon’s migrant worker advocacy group Anti-Racism Movement (ARM Lebanon). A General Security representative did not respond to requests for comment.

Although the woman, identified only by her initials, N.M., was acquitted of what ARM refers to as “false accusations” (ARM declined to say what those accusations were, as they are irrelevant to N.M.’s current predicament) the Lebanese authorities tried to deport her on Aug. 4. The deportation was thwarted at the last minute when her caseworker arrived at the Beirut airport and started protesting with bystanders. N.M. is now being detained based on her expired residency, which General Security is now purportedly using as a reason to deport her.

According to an ARM statement earlier this week, NM is in danger if she returns to Kenya, as she “faces serious risks from her family and community.”

“This whole situation is shady,” Farah Baba, the spokesperson of ARM, tells L’Orient Today. “Not just the accusations which were proven false in the presence of our lawyer, but the maltreatment of the woman over the course of her detention, which is a flagrant violation of international law.”

The fact that they chose Aug. 4 to try and deport her, Baba says, knowing that it was a day of mourning, and many people wouldn’t be working, “can barely be seen as a coincidence.”

In a press release, ARM alleged multiple illegal practices by General Security, including lying to her lawyer and UNHCR representatives, and withholding information about her legal status and whereabouts on the day of the attempted deportation, adding that the behavior “raises questions about the real reasons behind her deportation.”

Baba says that “circumstantial evidence” suggests that NM is being singled out for being politically active in the past year, taking part with her community in a sit-in against the Kenyan consulate, which they claim has been abusive. “Not only have these claims been investigated and reported by CNN and other outlets, but she was also one of three very visible activists who were regularly interviewed by the media about their activism.”

The damning CNN report, which was published in July 2020, alleges that the honorary consulate, the consul and assistant to the consul, who are Lebanese citizens rather than Kenyan, both verbally and physically assaulted several of the women who sought their help, insinuated that they engage in sex work to pay for their flights home and overcharged them for those flights.

Baba also alleged that the assistant to the consul of Kenya in Lebanon, Kassem Jaber, has specifically targeted NM in public. “There is footage of him berating her while prominently displaying her passport, including her photo and name,” Baba says, “and he is known to have a good relationship with General Security.”

ARM claims that Jaber had also visited NM after she was arrested and that he pressured another Kenyan woman to testify against her.

In a phone interview with L’Orient Today, Jaber vehemently denied all these allegations, saying that he hasn’t seen or spoken to NM since January 2022 and that, contrary to media reports and statements by ARM, NM refused the consulate's offer to intervene, and was urged by ARM to do so. “My lawyer has tried to get in touch with ARM about this case by calling them 17 or 18 times. I have a record of this, but they don’t want to talk to us.”

Jaber says that he categorically rejects the brush with which the Kenyan consulate and his person are being painted in the media and by ARM. “I have the full right to sue [the media] for defamation. They can’t back up anything they’ve written about me or the way the consulate is handling this case with facts,” he added. “They are also wasting my time, by interviewing me and then twisting my words.”

When asked whether he would try to intervene against NM’s deportation, he reiterated that this was his intention, but NM refused his help and that, as an honorary consulate, “we stand behind the decisions of the Lebanese government and General Security.”

Baba says both Jaber’s statements are untrue. “ARM wasn't contacted by Jaber’s lawyer even once and we did not urge her to refuse any assistance of the consulate or be in contact with them.”

ARM states that Lebanese authorities are breaking international laws and norms by bypassing the UNHCR’s legal mandate to forcibly deport a registered asylum seeker, arbitrarily detaining an innocent woman, keeping her in inhumane conditions for months, forcing her into conducting a PCR test in prison and taking her to the airport for deportation against her will.

In this context, ARM referred her case to the UN High Commissioner for Refugees (UNHCR) in Lebanon on April 15 to prevent her deportation and assess her eligibility for refugee status. Her asylum claim is still being assessed by UNHCR.

“UNHCR does not provide information on individual cases, given confidentiality and data protection considerations,” Dalal Harb, UNHCR’s spokesperson in Lebanon, told L’Orient Today. “More broadly, seeking asylum is a fundamental human right, enshrined in Article 14 of the 1948 Universal Declaration of Human Rights. UNHCR works closely with states, including Lebanon, to support in ensuring this universal right is respected.”

While UNHCR decides whether to grant her asylum, NM is at risk of being deported at any moment, says Baba. “We are doing everything we can to keep an eye on her, even by contacting airlines that fly to Kenya, to make sure that they don’t try to deport her again in the middle of the night or on a day where people are less likely to be working, like they did last time,” she says.

“All we need to do is make sure to be present when it happens. The previous time, we succeeded in stopping her deportation at the last minute and we will do it again.”

Correction: A previous version of this article stated that N.M.'s deportation was stopped when her lawyer arrived at the airport to protest. It was her caseworker. A quote from Farah Baba has also been clarified to reflect that the allegations against N.M. did not reach the stage of court proceedings.

BEIRUT — The harrowing images were shared widely: Kenyan women camping outside their consulate in January, destitute and desperate to go home but stuck in limbo because their passports had been taken from them and the economic nightmare engulfing Lebanon made it impossible for them to raise the funds for plane tickets.Some of those who had been squatting in the wet cold that characterizes...