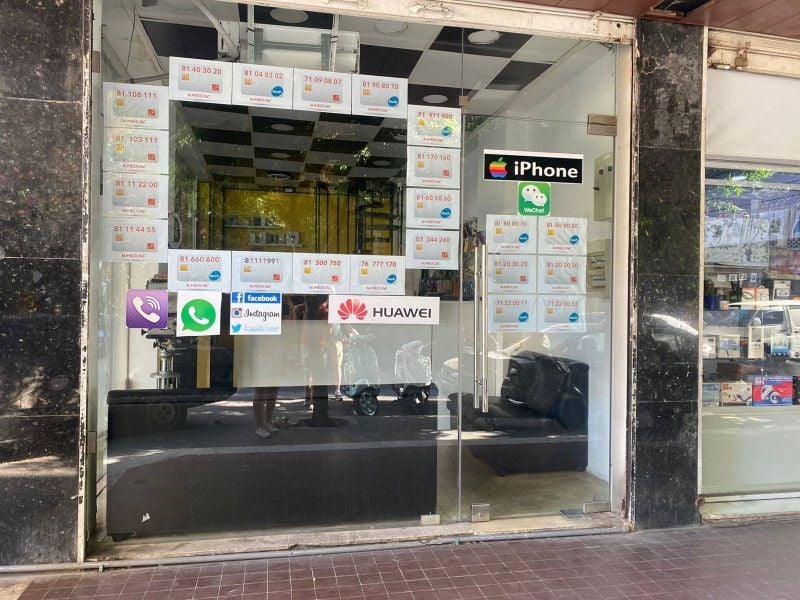 BEIRUT — “I can’t believe I’ll be paying more than triple the amount to recharge a weak 3G mobile data package that doesn’t even work all the time,” Aya Roumani, a business management student, told L’Orient Today.

Telecoms Minister Johnny Corm, Director General of Ogero Imad Kreidieh, and the chairmen of the two mobile operators, Alfa and Touch, Jad Nassif and Salem Itani, respectively, presented on Thursday the new telecom tariffs as approved by the government on May 20, which sparked outrage after going into effect on July 1.

The telecommunications prices came into effect Friday. All subscriptions are now being paid in dollars using Banque du Liban’s Sayrafa rate — which as of Wednesday stood at LL25,300 to the dollar. To calculate the new telecom prices, the original dollar rate (at LL1,507.5 to $1) should be divided by three, then multiplied by the Sayrafa rate.

Hundreds on Tuesday afternoon marched from the Energy Ministry headquarters in Corniche al-Nahr towards downtown Beirut to protest electricity shortages that Lebanon is struggling with and an increase in telecommunications tariffs implemented this month amidst an unprecedented economic crisis.

A number of demonstrators also staged a sit-in in front of Touch’s main sales center in Tripoli in protest of the sharp increase in their telecom tariffs, L’Orient Today’s correspondent in the north reports.

Charbel Boutrous said that he is forced to no longer have any internet services on his phone.

“I’m trying to replenish my family’s home decor services business, and I need to constantly be following up with clients and suppliers. To do that I’d have to pay around LL2 million for 4G on my phone, whereas I used to pay around LL60,000 for the same service,” he said.

Boutrous decided to resort to using the Wi-Fi he has installed at his shop to coordinate with his clients and partners, to save money.

“In those troubling times, I can’t trouble myself with one unnecessary bill,” he explained.

Hassan Hamiyeh, mobile shop owner, said that two fights have already broken out in his shop since the new telecoms tariffs were imposed.

“People are under a lot of pressure, they come here wanting to buy days on their card, get shocked at the steep increase in prices, and start arguing with me and fighting as if I’m the one who raised the prices,” Hamiyeh told L’Orient Today.

The increased tariff costs is an added burden to the many hardships the citizens already face.

With a breakdown of the financial and banking systems since 2019, decades of rampant corruption, and the coronavirus pandemic – the telecom sector is just one of many that has affected the citizens. Lebanon today faces one of the world’s worst economic crises in 150 years, which has pushed millions into poverty. People can no longer access basic services while items such as staple foods have become unaffordable.

Youmna Haidar, a mother of two sons, who both live in Sierra Leone with her husband, spoke to L’Orient Today on the extra burden the tariffs have imposed on her life.

“I would usually pay around LL75,000 for a 3G data package from Alfa, so I’d be able to WhatsApp call my husband and kids, as it’s pointless to have Wi-Fi since I only have two hours of electricity per day,” she said.

A group of protesters in the Baalbeck-Hermel region staged a sit-in Monday in front of the Touch branch in Baalbeck and closed it for some time preventing customers from going in, in protest of the services’ high prices.

Some citizens have tried to adapt by cutting costs, while taking into account the well-being of their children.

“I had to pull my children out of the private school they had attended for six years and move them to an overcrowded, understaffed, and underfunded public school,” Rania Elias, a school teacher said.

Elias stated that her house is big and needs two Wi-Fi machines to secure internet access to the whole house, but in the current situation she deemed that “impossible.”

“I removed one of the routers and placed the remaining one at the center of the house, they won’t be able to study in their rooms as usual, they’ll have to sit closer to the router,” Elias concluded.

She also noted that many other kids at her childrens’ school won’t have internet access in the fall as the parents aren’t able to afford it.

According to a recent United Nations report, “The compounding factors of economic collapse, the inability to pay teachers, transportation costs, fuel to keep the lights on, availability of supplies, space, and the pandemic threaten to overwhelm the ministry’s capacity to open schools in the upcoming school year. This will compound pre-crisis issues as children across the country already had lower than average literacy and numeracy rates compared with the rest of the Middle East region.”

As a result of the economic crisis, around 55,000 students moved from private to public schools in 2020-21 alone, thus adding more pressure on the public school system, as pointed out by a World Bank Report of 2021.

Although some people still have access to Wi-Fi, others are forced to get rid of their telecoms services altogether.

“My salary is paid in liras so how can I afford to pay at the Sayrafa rate or in dollars?” asked Imad Hage, who is a construction worker.

Hage no longer has a phone, and has removed the Wi-Fi router from his house.

Itani, the chairman of Touch, reiterated that the new tariffs are critical for the survival of the telecoms sector.

Meanwhile, Alfa announced in a statement Tuesday that it is “keeping up with the price change process” in the implementation of the government’s decision.

The company added that it is fully prepared to receive any concerns or reviews in this regard by contacting customer service via Alfa pages on social media platforms or by calling 111, which is free.

Correction: A previous version of this article said the Sayrafa rate was LL29,000. The correct Sayrafa rate as of Wednesday is LL25,300.