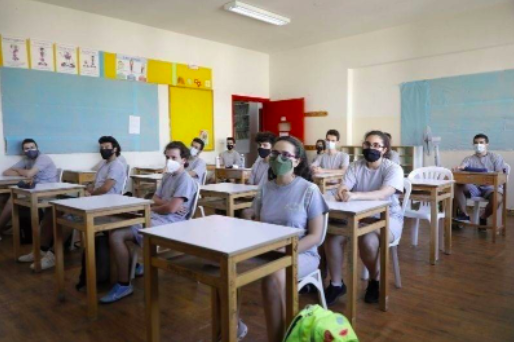 Students in a school in Lebanon. (Credit: Photo illustration by Marc Fayad)

Lebanon’s education sector has long been held as a foundational national institution — one of few in Lebanon. More than just a reliable source of quantifiable economic (and social) outputs, it has historically been a lifeline for the country’s people. This sector is today at a critical juncture, and while private schools are persevering under difficult circumstances, public schools are on the verge of collapse.

As a result of the economic crisis, around 55,000 students moved from private to public schools in 2020-21 alone, thus adding more pressure on the public school system, as pointed out by a World Bank Report of 2021. There has also been an alarming increase in dropout rates, due both to the extended pandemic closures and the need for additional income among families impoverished by the crisis. UNICEF reports that: “Three in 10 young people in Lebanon have stopped their education, while four in 10 reduced spending on education to buy essential items like basic food and medicine.” The international organization estimates that roughly 13 percent of families are asking their children to work as a way to cope economically.

Lebanon’s education system has been a bulwark of resilience in a very comprehensive sense—helping diversify and train the country's workforce, empowering women and underprivileged communities, and offering people social and economic mobility, even if to migrate and find work outside Lebanon. On a less quantifiable level, it has been key to the country’s imagination of itself and a reflection of the challenges posed by its persistent state of fragility.

Lebanon’s education sector was not built overnight; it is the product of decades of investment, work, and trust. Still, the past few years have been especially difficult, producing unresolved structural pressures that have left it particularly vulnerable to today’s political and financial crises.

Public resources allocated to education in Lebanon have always fallen short. In 2020, less than 2 percent of the country’s GDP was spent on education, significantly lower than the recommended minimum of 4 percent to 6 percent (UNESCO, 2015 ; World Bank 2017). As detailed in a recent World Bank Report, from January 2020 to February 2021, the Lebanese school system opened for less than 25 percent of the school year.

Over the years, the country has had to deal with a number of significant challenges, many of which are still ongoing. In turn, these challenges — particularly, the Syrian refugee crisis — have added pressure on an already fragile education sector, all against the backdrop of the country’s broader crisis of governance. In 2019, “No Lost Generation” estimated that 365,000 Syrian refugee children were enrolled in Lebanese schools.

Against the backdrop of a coordinated, even if limited flow, of donor aid, many internationally-backed projects were implemented for a certain period to ease the burden on the education sector and to offer quality education for refugee students. But, once the final report of each of these initiatives was presented to the stakeholders, the implementation of core measures to build such a robust and inclusive educational sector largely stopped. The implications on refugee children are alarming, with more than half of Syrian refugee children out of school.

The COVID-19 pandemic has brought with it additional burdens on the already vulnerable education sector. Remote learning proved to be challenging, due to a variety of factors: instructors were not trained to teach remotely, internet access was limited and unstable, and the rationing of electricity and fuel shortages meant that many homes had no power for many hours on any given day.

Remote learning has also largely put students in the same basket, despite differences in their educational, social, and economic needs. Diversity, differentiation, and inclusion are essential to maximize student potential, and when not centered and streamlined, educational services risk inhibiting students’ abilities and development. While the opening of schools may have addressed some of these issues, it has also come in the context of the new Omicron wave and a battered healthcare system.

The earlier period of remote learning and the return of in-class learning coincided with the almost complete collapse of the country’s economy. Teachers who have been on the frontlines have been especially hard hit. Public school teachers who are still paid in the local currency have been made extremely vulnerable, as have teachers in private schools who are still largely paid in lira. The most affected are teachers paid by the hour, who in some cases have seen the value of their hourly wages fall from around $13 to only one dollar per hour!

Despite soaring inflation and an informal dollarization of the economy, the proposed national budget has made no plans to adjust the salaries of public school teachers, which have become so deflated that at times they barely cover the transportation costs to go to work, especially for teachers commuting from rural areas.

Like other core sectors of the economy, the prolonged crisis and extreme hardship endured by teachers has sparked high levels of emigration. More than 15% of private school teachers have left the country seeking work elsewhere (El Deeb, 2021). The teachers who remain in Lebanon often have to take on the additional responsibilities brought on by shrinking staff, despite significant pay cuts and the daily burdens resulting from the collapsing economy.

The enduring impact of the country’s economic crisis is also felt by families and households that can no longer afford tuition or transportation to and from school, especially in rural areas. Teachers have been reported to supply school materials out of pocket, despite their extreme income vulnerability. The rising cost of living in Lebanon has made core necessities like education increasingly inaccessible for vulnerable households.

The critical state of Lebanon’s education sector reveals that there can be no cosmetic reforms or band-aid approaches. Nor will ad-hoc assistance to the education sector keep it afloat for long. There is no sustainable, functioning education sector without resolving the country’s failed model of governance and its all-encompassing economic crisis. In a sense, how we respond to the threat facing one of the country’s most trusted institutions will shape our collective future.

Lebanon needs to prepare a comprehensive roadmap that builds on recent studies and offers a plan for quality education to all students. Most urgently, however, the Lebanese government has to prioritize its assistance to the education sector to save what is left, by ensuring that our educators can deliver their classes in a dignified way, that students do not have to choose between their education and their families’ economic survival, and that schools and families together are able to provide children an adequate environment to learn.

A longer version of this article is available on the LCPS website.

Rima BAHOUS is an Associate Professor of Education at the Lebanese American University.

Fadi Nicholas NASSAR is a research fellow at the Lebanese Center for Policy Studies and Assistant Professor of Political Science and International Affairs at the LAU.

Makram OUAISS is the Executive Director of the LCPS.

Lebanon’s education sector has long been held as a foundational national institution — one of few in Lebanon. More than just a reliable source of quantifiable economic (and social) outputs, it has historically been a lifeline for the country’s people. This sector is today at a critical juncture, and while private schools are persevering under difficult circumstances, public schools are on...