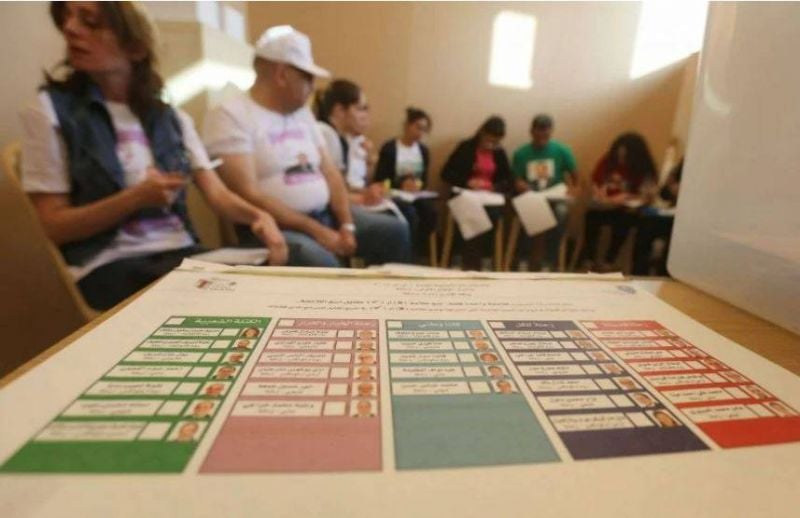 The Sunni candidate on the Lebanese Forces list, Bilal Melhem al Houshaymi, is said to be supported by Fouad Siniora. His opponent on the list led by Michel Daher, Omar Halablab, is reportedly benefitting from Ahmad Hariri’s support.

But the withdrawal of Future Movement leader Saad Hariri from politics has reshuffled the cards in this constituency, which is traditionally close to the Hariri family. Two scenarios are therefore possible: the Sunni vote will be either scattered among two or three lists, or there will be a high abstention rate, which would lower the electoral threshold and benefit the weaker lists.

Two weeks ahead of the elections, the electoral landscape is still unclear, despite some certainties, such as the victory of the Shiite candidate for Hezbollah, Rami Abu Hamdan, and outgoing Lebanese Forces MP George Elie Okeis.

Another sure thing that must not be overlooked is the buying of votes in the district, sometimes sold as a package deal to the highest bidder at “3,000 votes for some $500,000,” said Kamal Feghali, an electoral analyst.

Zahle’s reality is complex. Its voters, including 9,566 voters registered abroad, will cast their ballot to elect seven MPs. Only one seat is allocated to the Sunni sect, although it is the largest at the demographic level. while two seats are allocated to the Greek Catholic community, which has 30,612 registered voters.

Eight lists and 44 candidates will compete for the seven seats in Parliament. The two strongest lists emanate from the traditional political class and from the March 14-March 8 split: on the March 14 side, that of the Lebanese Forces, the only complete list with seven candidates for the seven seats; and on the March 8 side, a list that resulted from an alliance between the Free Patriotic Movement, Hezbollah and the Armenian Tashnag party. Two other lists are built around key Zahle families that previously allied with the FPM or March 8 coalition: that of businessman Michel Daher, who is allied this time with the Kataeb after leaving the Aounist parliamentary bloc; and that of the Popular Bloc, led by Myriam Skaff.

Finally, there are four lists affiliated with the protest movement, some of which were arduously unified into a list but without a common program.

It is in this constituency that the winning candidate with the lowest number of votes in the 2018 elections made it to Parliament, with only 77 preferential votes. The victory of Armenian-Orthodox candidate Eddy Demerjian is a textbook example of the perverse effect of the proportional representation system in force.

This candidate was on the Hezbollah-supported list, which won two seats after meeting the electoral threshold twice.

But apart from the Shiite candidate, no one on the list had managed to beat their opponents on the competing lists in preferential votes. All other seats having been allocated, the Armenian-Orthodox seat on the list therefore went to Demerjian.

The 2018 parliamentary elections firmly established the ruling parties’ triumph over a civil society list that did not convince the electorate. Two candidates on Hezbollah’s list were elected, Anouar Jomaa (Shiite, 15,601 votes) and independent candidate Eddy Demerjian.

Two candidates for the FPM and its allies, Michel Daher (Greek-Catholic, 9,742 votes) and Salim Aoun (Maronite, 5,567 votes), were also elected.

Two other lists, that of the Skaff’s Popular Bloc and the civil society list, Kulluna Watani, could not meet the electoral threshold of 13,095 votes.

The tactical vote: The LF has made Hezbollah’s arsenal and its harmful effects on building the rule of law the center of its campaign, which is joined by many supporters of the protest movement.

The campaign could bear fruit, as many Christian voters intend to vote tactically, by giving their votes to the strongest opponents of the pro-Iranian party, namely the LF list.

“My vote will be tactical, against Hezbollah, and for the LF,” said Najib Khazzaka, a resident of Zahle and retired journalist.

It should be remembered that, while the Sunni sect is the largest in the district, when all the Christian sects are taken together, the Christian vote consists of a majority in this constituency. It represents about 100,000 registered votes against 80,000 Muslim votes.

“The electoral force in Zahle is mainly Christian,” said the head of the LF Elections Division Nadim Yazbeck.

“Given the uncertainty surrounding the Sunni vote, we are relying on ourselves and our good organization,” he added.

Given the history of particular sympathy for Samir Geagea’s party in the capital of the Bekaa., incumbent MP Georges Okeis to be re-elected.

But beyond this almost guaranteed seat, the forecasts are cautious as to the LF’s ability to obtain two seats, or even the three seats they have an eye on.

“Everything will depend on the Sunni vote, which remains unclear. If it supports the LF, they could easily win two seats,” said electoral analyst Fouad Khalil.

The FPM’s decline: It is unknown how much the popularity of Gebran Bassil’s FPM has declined in Zahle since 2018, because there are no figures in this regard. It could, moreover, be compensated for by the Shiite vote, which generally goes to the Hezbollah-Amal candidate by a large margin.

Even if the other Maronite candidates do not really carry the clout compared to him, the fate of outgoing Aounist candidate, Salim Aoun, who is now deprived of Hariri’s support, remains vague for the moment. This is especially true since the FPM and Hezbollah are this time on the same list, unlike in the 2018 elections in which they obtained four seats between them.

Will the list that is expected to get two seats meet the electoral threshold to bring the Maronite MP to Parliament again?

This situation could also reflect negatively on the Popular Bloc’s list.

“Myriam Skaff is known to be close to March 8, including the FPM. Her list could pay the cost of this decline in popularity,” he said.

Families vs. political parties: The weight of Zahle’s large families should not be neglected. It has always helped to tip the balance during major elections. It is notable that these families are now widely represented in the traditional political parties and the popular protest groups.

“The LF activists come from the big families in Zahle,” said Yazbeck. “At the same time, the youth no longer believe in feudalism. The families’ political impact has gradually lost its importance to the parties.”

It is in this state of affairs that the greatest uncertainty falls on Myriam Skaff. Widow of Elie Skaff, the Maronite candidate from Bsharri is struggling to perpetuate the leadership of her husband who died prematurely.

The Sunni vote: One thing is certain, the Sunni vote will make a difference. But no one can say for sure today whether this community, a large part of which consists of the Arab tribes, Bedouins who were naturalized in 1994, will be mobilized or will give its vote to this or that list.

L’Orient-Le Jour reached out to Sunni leaders of the Future Movement, but to no avail. Behind the scenes, however, there is talk of scattered support from figures close to Hariri.

“On the LF list, Sunni candidate Houshaymi [from a large family in Saadnayel] is supported by Fouad Siniora, former head of the Future parliamentary bloc,” said political analyst Hares Sleiman. “Meanwhile, the Sunni candidate on Michel Daher’s list, Omar Halablab ([from Bar Elias, director general of the Culture Ministry and close to the Araji family], is supported by Ahmad Hariri [Saad Hariri’s cousin].”

A scattered protest movement: Will the popular protest groups which is scattered over four lists have a seat? “It will be difficult for them to meet the electoral threshold,” said Hares Sleiman.

“Civil society candidates are affiliated with small, unorganized groups with no affiliation,” said Georgia Dagher, a researcher at Policy Initiative, a local NGO that analyzes the elections.

“In addition to the fact that these lists lack vision and unity, the electoral law is not in their favor,” added Khalil.

Only a high Sunni abstention rate would benefit the protest movement’s lists. One name stands out; it is that of Greek-Orthodox physician Eid Azar, to whose advice the Lebanese devotedly listened during his television appearances when COVID-19 was at its worst.

This constituency consists of the Zahle district.

Seven seats to be filled: two Greek-Catholic, one Sunni, one Shiite, one Maronite, one Greek-Orthodox, one Armenian-Orthodox.

The Sunni candidate on the Lebanese Forces list, Bilal Melhem al Houshaymi, is said to be supported by Fouad Siniora. His opponent on the list led by Michel Daher, Omar Halablab, is reportedly benefitting from Ahmad Hariri’s support.The Sunni vote is key in the May 15 parliamentary elections in the Bekaa I constituency, which consists of the Zahle district. With 54,584 registered voters, or 30...

In North Lebanon III, everyone, or almost everyone, came out a little bruised

In Beirut I, the LF and the protest movement consolidate their presence

In Akkar, a rare advance for the FPM

In Baalbek-Hermel, Amal and Hezbollah did not take it all