Schools reopening, beginning of an extraordinary Parliament session, candidate filing period opens for May elections: Everything you need to know to start your Monday

Here’s what happened over the weekend and what to expect today, Monday, Jan. 10, and this week 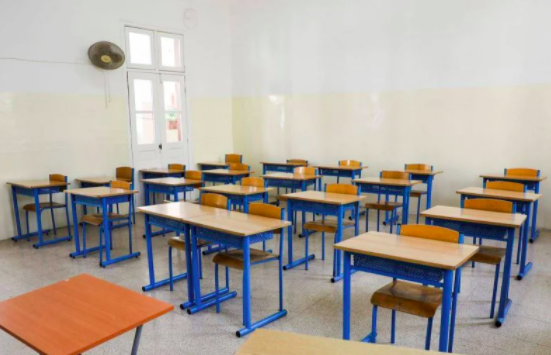 Schools across Lebanon are reopening today, with a variety of COVID-19 restrictions in place, while some schools postponed the return to classes. Even as COVID-19 daily caseloads hit record levels last week, with 7,974 cases being recorded on Friday, many schools across the country are reopening for in-person learning today, mindful of the damage that remote education inflicted during the last two academic years, and particularly in light of the ongoing electricity crisis and worsening internet access in the country. However, some schools have announced that they will not reopen in person today, including in Bsharri as well as in Zahle and some other parts of the Bekaa, where schools announced they would postpone the return to in-person classes another week, while the General Secretariat of Catholic Schools in Lebanon left the reopening date to each school’s discretion. Speaking at a joint press conference last week, Education Minister Abbas Halabi and Health Minister Firass Abiad said that the return to schools and educational institutions will come with strict measures in place to prevent the spread of COVID-19, vowing that the Education Ministry will publish reports on case numbers in each school and governorate and that rapid tests will be distributed to schools. The ministry also made a push to get students and teachers vaccinated over the weekend.

While thousands lined up to get COVID-19 vaccines at a Health Ministry-sponsored “vaccine marathon” over the weekend, a few hundred protesters gathered on Saturday to protest vaccination regulations in Lebanon. While vaccination is not mandatory across the board in Lebanon, in order to go to work as of Monday, public sector employees, as well as employees in the education, health, and tourism sectors, must either be vaccinated or undergo PCR testing twice a week at their own expense. Proof of vaccination or a negative PCR test is also required to enter restaurants and bars. The protest against the new measures was organized by the General Federation of Lebanese Trade Unions, whose president, Maroun al-Khouli, told L'Orient-Le Jour that this demonstration "is not against vaccination but against the obligation to vaccinate." Meanwhile, 50,903 people received vaccine doses during the immunization marathon held across Lebanon over the weekend, according to Health Minister Firass Abiad, who also said Sunday that despite daily COVID-19 case numbers being higher now than during last winter’s surge, the hospital occupancy rate for COVID-19 patients now is one-third of what it was last year. He attributed the difference largely to vaccination. Some 2.45 million people, or about 45 percent of Lebanon’s adult population, have received at least one dose of the vaccine.

An extraordinary Parliament session is set to begin today, under a decree signed last week by President Micheal Aoun. The signature of this decree and the dates of the session, which will run until March 21, were announced by Aoun without any reference to the intended agenda, but it is expected that the legislature will take up the 2022 budget. At the end of a meeting with Aoun on Wednesday last week, Prime Minister Najib Mikati said that they had achieved an agreement to open this session and hold a cabinet meeting "as soon as the draft budget 2022 is received, within the next two days." However, the budget’s completion has not yet been announced, nor has a date been set for the cabinet meeting. While the passage of the budget will be a prerequisite to any deal with the International Monetary Fund, some observers have also pointed out that the calling of an extraordinary Parliament conveniently restores immunity to some sitting MPs who have been implicated in the Beirut port blast investigation.

The application period for candidates planning to run in the 2022 legislative election begins today. Interior Minister Bassam Mawlawi released a circular on Wednesday declaring that people interested in running in the forthcoming parliamentary elections can apply between January 10 and March 15. According to the decree, the fee to apply to run in the elections is now set at LL30 million, up from LL8 million for the 2018 parliamentary elections. While the political landscape is still uncertain ahead of the elections that are now scheduled on May 15, with questions in particular regarding the participation of Future Movement leader Saad Hariri, some parties have already begun to campaign. The head of the Lebanese Forces, Samir Geagea, declared on Saturday his party's “general mobilization” in preparation for the elections.

Marwan Habib, previously accused by multiple women in Lebanon of sexual harassment, was arrested in Miami and appeared in court there Friday on charges of burglary with assault and battery after he allegedly broke into a women’s hotel room and assaulted her. Habib acquired notoriety in Lebanon in late 2019 after scores of women accused him of harassing them. Attorney Karim Majbour, who filed a lawsuit against Habib on behalf of the alleged victims in Lebanon, told L’Orient Today that the case had been put on hold due to the COVID-19 pandemic but is still active. The alleged assault in Miami took place in November, according to the local WSVN 7News station, with the victim reporting to police that she was awoken in the early hours of Nov. 7 to find “the defendant at the foot of her bed,” after which he “jumped on top of her and began to kiss her and touch her.” Miami-Dade County court records show Habib is currently jailed without the possibility of being released on bail, due to an immigration hold.

Electricité du Liban stated Saturday night that its power service had been disrupted across the nation, blaming the outage on demonstrators who “stormed the main substation in Aramoun.” The state-run power utility said in a statement that its services were cut off at 5:27 p.m. across Lebanon because "protesters in the Aramoun region on the evening of Jan. 8, 2022, rushed the main substation... jeopardizing their personal safety and the safety of the station's staff." According to EDL, the protesters' interference at the substation, including opening circuit breakers between the Zahrani power plant and the Aramoun facility, affected the electrical grid's stability, resulting in a nationwide power outage. Given that EDL typically provides only a few hours of power a day and most customers rely on private generators to provide electricity in its absence, many electricity consumers may not have noticed the shutoff.

Hundreds of dentists cast their ballots on Sunday to vote for president of the Order of Dentists and nine council members. Roland Younes was elected president of the order, defeating prior president Elias Maalouf. The Sunday poll was the second one in two months, as the originally scheduled election in November was invalidated amid a dispute over vote counting and the destruction of ballot boxes.

In case you missed it, the weekend's must-read from L'Orient Today: “On IMF deal, a large gap remains between political rhetoric and reality”

Want to get the Morning Brief by email? Click here to sign up.Schools across Lebanon are reopening today, with a variety of COVID-19 restrictions in place, while some schools postponed the return to classes. Even as COVID-19 daily caseloads hit record levels last week, with 7,974 cases being recorded on Friday, many schools across the country are reopening for in-person learning today, mindful...