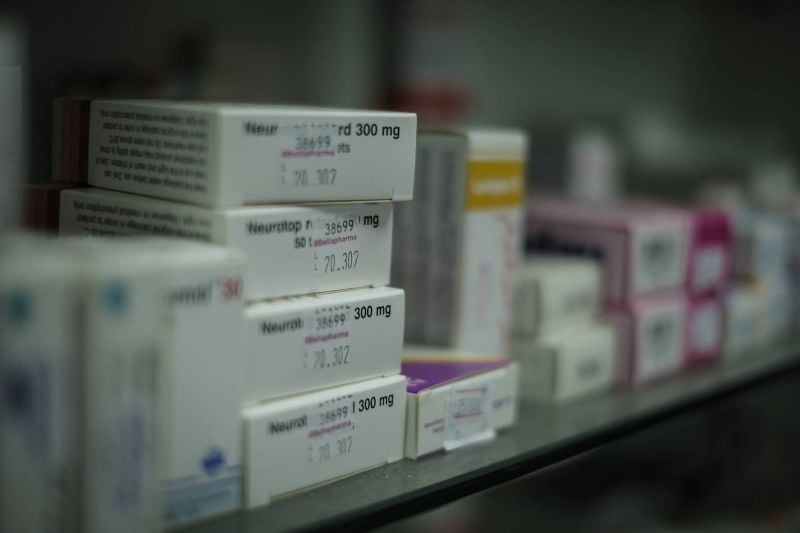 The prices of many medications have leaped by five or six times. (Credit: João Sousa/L’Orient Today)

BEIRUT — At the Mazen Pharmacy on Corniche al-Mazraa on Wednesday, Dania, 34, was in for a shock. Her father’s hypertension medication, Amlor, previously priced at LL15,000, had risen overnight to LL132,000.

“It is becoming so hard to live in this country for someone like my father who has a chronic disease; the medical bills can pile up … it is just unbelievable,” Dania told L’Orient Today as she tried to fathom the sudden price increase.

With the removal of the state subsidies on a wide array of medications this week, many found themselves in Dania’s shoes — anxious and fearful for their own or a loved one’s health as medications become increasingly unaffordable.

After monthslong medication shortages, Health Minister Firass Abiad announced on Tuesday last week that subsidies on pharmaceuticals for chronic diseases would be largely lifted, but that subsidies on drugs used in cancer treatment, dialysis and the management of mental health illnesses would remain in force. Abiad, however, did not provide a detailed list of the items affected.

Only this week did the Health Ministry publish new drug prices, listing 5,481 drugs, of which 1,504 are now marked “non-subsidized.”

“As a cardiologist, I have received thousands of messages since yesterday [Tuesday], from patients asking me for an alternative to their [now] unaffordable heart medication, the price of which is skyrocketing,” Elie Chammas, head of cardiology at the Clemenceau Medical Center-Beirut told L’Orient Today. “The issue is that we don’t even have the choice for an alternative, affordable medication for heart patients,” he added.

Chammas highlighted that halting medication for heart patients puts them at high risk, cautioning that the number of resultant deaths “might even exceed the number of corona[virus] deaths.”

Commenting on the removal of the subsidy, Olivier De Schutter, United Nations special rapporteur on extreme poverty and human rights, said Wednesday that Lebanon’s Health Ministry should reconsider its decision and stop hurting those most in need of help during Lebanon’s now more than 2-year-old economic crisis.

“The recent lifting of subsidies on medications in Lebanon, without a plan for how people will afford them now, is as untimely as it is irresponsible. 5x or 6x price increases will lead to even more pressure on the already crippled health care system,” De Schutter said in a tweet.

De Schutter added that he spoke with Abiad last week, who “rightly criticized the tendency of the Lebanese health care system to prioritize interventions, at the expense of preventative care,” but he added, “medications are a key way to strengthen preventative care, and making them unaffordable for the majority of the population will only further this problematic trend.”

The rapporteur also explained that the government had previously promised to put in place safety nets before lifting subsidies, but the realization of long-delayed social assistance programs for the country’s most vulnerable remains a long way off.

“Even if the announced ration card was enough (it is not), funding sources are not even confirmed yet. I expect the Gov't to address this situation with utmost urgency,” he added via Twitter.

Meanwhile, for patients like Marwan, the lifting of subsidies raises fears that paying for medications will now compromise their ability to afford other basic necessities. The 46-year-old, whose ailments include heart disease, high cholesterol and high blood pressure, told L’Orient Today that the price hikes for medications leave him in a state of anxiety over how he will manage to buy anything else.

“I will probably die not from the diseases themselves but from hunger because I will not have any money left if I am to buy my medications at this point,” he said.

The Health Ministry’s latest round of subsidy ending doesn’t just affect medications; it also hits an essential source of nutrition for many infants: baby formula milk.

With a packet of baby formula now costing LL94,000, Karine, 28, who was at Machmouchi Pharmacy in Verdun on Wednesday, told L’Orient Today that she is shocked at the price increase and expressed worry that she might not be able to afford as much baby formula as she needs for her child.

Fears about affordability have also caused an unprecedented increase in requests for assistance from at least one NGO that helps Lebanese source much-needed medications.

Marina El Khawand, who runs Medonations, an initiative that aimed to provide medical assistance to the families affected by the Aug. 4 Beirut port explosion and later expanded to help anyone in need of medication they cannot afford or find, told L’Orient Today that the organization has received 735 requests since Monday night from patients who saw the new prices and are now asking for urgent assistance.

“This is the first time the amount of patients has peaked that quickly, I wonder how we will be able to help the ones asking for donations after authorities have removed subsidies on [drugs for] chronic diseases,” she said.

As those purchasing medications fret about funding them, the people on the other side of the country’s pharmacy counters, brace themselves to contend with anger and upset over the price changes.

One pharmacist at the Machmouchi Pharmacy told L’Orient Today “every customer was taking out his anger on us, thinking that our pharmacy is the only one who has adjusted the prices.”

BEIRUT — At the Mazen Pharmacy on Corniche al-Mazraa on Wednesday, Dania, 34, was in for a shock. Her father’s hypertension medication, Amlor, previously priced at LL15,000, had risen overnight to LL132,000.“It is becoming so hard to live in this country for someone like my father who has a chronic disease; the medical bills can pile up … it is just unbelievable,” Dania told L’Orient...