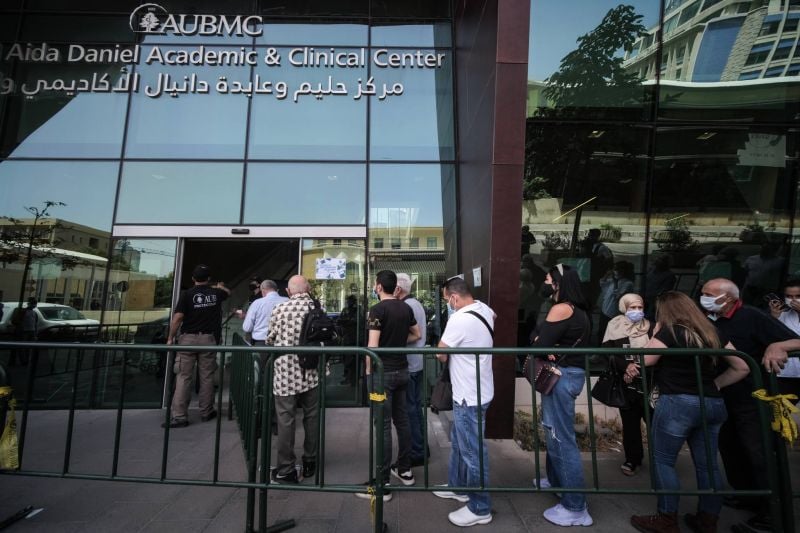 According to Abiad, the number of cardiac patients at RHUH has roughly doubled since Lebanon’s medicine shortages began. “Even if the patients are going to resort to alternative medicines, this wouldn’t be helpful, because these medicines are very unique in their compositions.”

“We have been seeing an increase in patients admitted to the cardiac care unit, and we are trying our best to suggest alternative medications for these patients, for them to be able to continue with their treatments when they go back home.” Abdo Daou, a cardiologist at Aboujaoudé Hospital just outside Beirut, told L’Orient Today.

The president of the private hospitals syndicate, Suleiman Haroun, told L’Orient Today that heart patients face heightened risk as medications and even the operational status of Lebanon’s massively under-resourced hospitals are threatened. “Surgeries, medications and diagnosis are almost out of reach [costwise] for heart patients and patients suffering from other chronic and severe diseases as well,” he said.

Haroun also explained that he has received reports from hospitals about an increase in admission of patients with chronic diseases, including cardiac patients.

According to the doctors who spoke with L’Orient Today, patients have been struggling to obtain two main cardiovascular medicines due to ongoing shortages.

Lasix, one of the medicines, is manufactured locally with a license from a French laboratory. The second one, Centrum, is an imported multivitamin specially formulated to help lower cholesterol levels for a healthy heart, according to Nabil Shasha, the head of RHUH’s cardiology division.

As the value of Lebanon’s local currency has torpedoed amid the government’s failure to address the economic crisis, pharmacy shelves have emptied without being replenished, and some pharmacies have shut altogether. Banque du Liban’s dwindling reserves have meant that the country’s central bank is no longer able to subsidize over-the-counter medicines such as Panadol. Furthermore, a backlog in subsidy invoice payouts from BDL has led medicine importers to hold off on selling their products to pharmacies out of fear of suffering financial losses should the promise of subsidy payments fall through.

Consequently, patients needing prescription drugs have found them all but impossible to find. Many of those that are in stock are unaffordable. According to a June report by the United Nations Children Fund, a huge increase in medication prices has negatively impacted health care in 76 percent of households in Lebanon.

Rania, 39, told L’Orient Today that finding her father’s heart medication often requires taking a day off work to search for it and wait in line at a pharmacy, sometimes without success.

“At one point we had to take my father to the cardiac care unit at a public hospital, because this is the only way that we can guarantee, at least, that any treatment can be done for him in order to decrease the risk of heart attack,” she said.

Hadi Skouri, a cardiologist at the American University of Beirut Medical Center, told L’Orient Today that many patients at risk of heart failure are reaching out to cardiovascular doctors at AUBMC but are unable to afford the tests needed for a diagnosis, including electrocardiograms and echocardiograms, or the needed treatments.

“Implantable devices are also a crucial element for treating patients with heart failure, and these devices are now either too expensive or priced in dollars,” Skouri said.

Abiad of RHUH noted that patients postponing doctor visits due to cost concerns often means that by the time they do come in, they are in a more critical state.

“When the diagnosis comes at a late stage, patients’ health becomes more vulnerable, and we are seeing more heart failure patients due to their inability to afford tests,” Abiad said.

Attempts to fill the gap

With imported drugs becoming expensive and scarce, the demand for locally produced alternatives has increased.

“Some medications don’t have local alternatives, but if available, patients are resorting to them immediately,” Skouri said.

But Mazen Matar, a medical representative at Benta Pharma Industries, a local pharmaceutical producer, told L’Orient Today that although local pharmaceutical companies are producing some medicines for patients with heart diseases, and even though there is an increase in demand for locally produced alternatives, “the machines that produce these medicines can only manufacture a limited amount of these medicines.” This leads to shortages of even locally produced medicines such as Lasix.

“We are trying to double our capacity to be able to meet the market’s demand, but unfortunately this is a slow and hard process,” Matar said.

Marina El Khawand, a Lebanese student and social activist, along with her five friends, recently launched Medonations, an initiative that aims to provide medical assistance to the families affected by the Aug. 4 Beirut port explosion.

“Just today I got a voice note from a man who has heart failures and also goes through dialysis. He has an urgent need for Lasix, which is used to treat excessive fluid accumulation, and Aspirin, which is used to help prevent heart attacks as well as recurrent clot-related strokes,” Khawand told L’Orient Today.

“Approximately 40 percent of the calls that we are receiving are patients that are already at the emergency rooms at the hospital but are not finding any medical help or medicine, and I assume that this percentage will increase progressively in the upcoming days [and] weeks,” Khawand said.