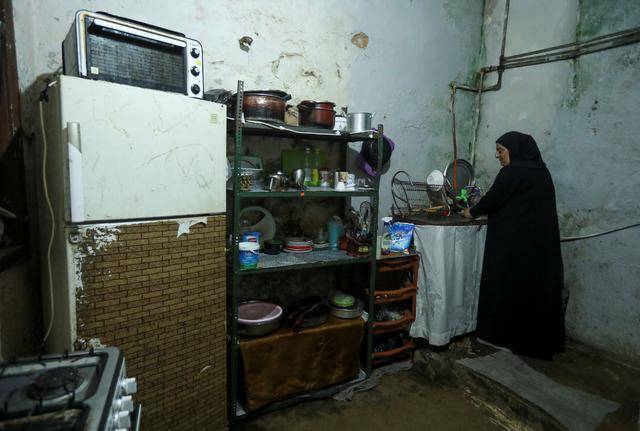 A woman works inside her kitchen in northern Tripoli. (Credit: Mohamed Azakir/Reuters)

BEIRUT— In the shadow of Lebanon’s economic crisis, this year’s Muslim holiday of Eid al-Adha has become a patchwork of residents trying to celebrate the Festival of Sacrifice amid a country in collapse.

The three-day holiday was once an annual highlight, with families the country over uniting from near and far, coming together for lavish meals and splurging on sugary treats and shiny new clothes. Not so this year.

Since last year’s Adha, the currency’s value has dropped by another two-thirds; it has now lost more than 90 percent of its value since the onset of the economic crisis in mid-2019, sending inflation, and the price of basic goods, soaring. Meanwhile, a cabinet empowered to alleviate the burden of everyday residents is even more of a distant dream after Prime Minister–designate Saad Hariri stepped down last week, following nine months of infighting with President Michel Aoun.

Eid al-Adha tradition dictates that Muslims donate cuts of mutton to the poor, which usually means an uptick in business for butchers like Abou Ahmad, who owns a butcher shop in Beirut’s Corniche al-Mazraa. But Lebanon’s economic crisis cast a pall over this trade.

The lira’s devaluation — it is currently trading at about LL 22,000 on the parallel exchange market — has sent food prices sky high, with a recent report finding that a month’s worth of food for a family of five now costs more than five times the monthly minimum wage.

“My shop was established more than 30 years ago. I have never witnessed an Eid al-Adha such as this year’s, with literally only two customers coming to me, and the two of them couldn’t afford to pay the price of the meat fully. It is a sad day for me; I don’t know how this business will continue; the future looks very unpromising.”

Another outcome of the economic crisis are the fuel shortages of recent months — catalyzed by Banque du Liban’s inability to sustainably subsidize imports at the official rate of LL1,507.5 to the US dollar, leading to shipment delays that in turn caused hourslong waits at gas pumps. Although a recent decision to partially end the subsidies has eased lines at the pumps, at least for now, it has also caused gas prices to shoot up by some two-thirds, leaving private vehicle transport unaffordable for many.

“We used to go to Nabatieh to celebrate with my grandparents and my extended family. This is the first year that my parents and I stay in Beirut, because we can no longer afford to buy a gas tank for us to get there and come back,” a 23-year-old architect named Fatima told L’Orient Today.

Nour Hamdan, who lives in Qatar and traveled back to visit Lebanon for the Eid holiday, said her suitcase resembled a compact pharmacy. Like many other expats, Nour brought medicine for her parents and extended family, who had showered her with requests once they learned she was traveling back, as pharmacy shelves have emptied and even shut altogether. BDL’s dwindling reserves have meant the central bank is no longer able to maintain its subsidies on basic medicines like Panadol, while patients needing prescription drugs have found them all but impossible to find.

“My husband and I used to come to Lebanon almost every Eid to celebrate with our families. The joy and the celebration were always amplified here,” Hamdan told L’Orient Today. “But this time, the joy of Eid is almost nonexistent, especially after seeing our families drained by the situation and the electricity and fuel shortages. The joy of Eid is now transformed into frustration.”

For families who manage to reunite for the holiday, the public health situation hangs over their heads. COVID-19 cases are again on the rise, with Lebanon registering hundreds of new positive cases a day, as fears abound that the Delta variant may plunge the country back to the situation of earlier this year, when lackluster policies over the winter holidays led to thousands of new cases and scores of deaths per day.

“We should be very worried,” Jade Khalife, a physician specializing in health systems and epidemiology and a member of the Independent Lebanese Committee for the Elimination of COVID-19 (ZeroCovidLB), told L’Orient Today earlier this month. “Delta can be more contagious and more severe.”

On Saturday, Firass Abiad, the head of Rafik Hariri University Hospital, warned that the Delta variant is spreading and the increase in the infectious rate is worrying. “After thousands of Covid deaths, we enter a new wave ill-prepared. This Eid will not bring good returns,” Abiad tweeted.

“Adha is about sacrifice for the weak, the needy, the helpless and the destitute. But the irony is that our politicians have twisted this concept. Instead, the only sacrifice they’ve made is sacrificing a whole nation and its well-being and future for their interests, robbing us of the desire to celebrate,” Lina Zhaim, the development services director at the American Community School Beirut, told L‘Orient Today.

“This is why there is this void, the lack of desire to celebrate, especially when you think of the children of Lebanon going to bed on empty stomachs, their parents struggling to put food on the table, the families of the Beirut blast victims still looking for justice, and the whole country just suffering at every level,” she said.

BEIRUT— In the shadow of Lebanon’s economic crisis, this year’s Muslim holiday of Eid al-Adha has become a patchwork of residents trying to celebrate the Festival of Sacrifice amid a country in collapse.The three-day holiday was once an annual highlight, with families the country over uniting from near and far, coming together for lavish meals and splurging on sugary treats and shiny new...

Wildfires continue to blaze in north, having razed ‘more than 100 hectares of land’

Aoun says he is ready to answer questions on Beirut blast