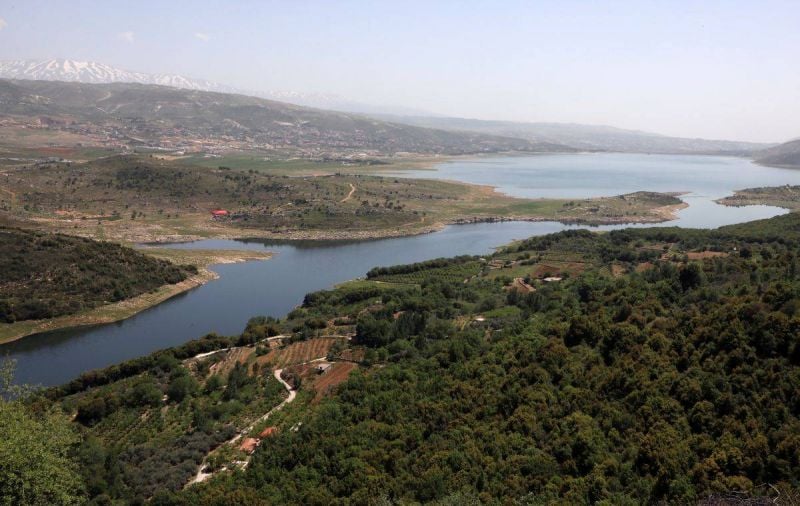 Water shortages are expected to worsen across Lebanon as pumps, which propel water from reservoirs to water tanks, go offline. (Credit: Mohamed Azakir/Reuters)

BEIRUT — Chantal Salloum was forced to close her restaurant, The Barn, in Beirut’s Gemmayzeh area for three hours last week when her water supply stopped. Due to increasingly frequent electricity cuts, the area’s power-dependent water pumps had stopped working for an extended period, causing her water storage tank to run empty.

“The situation has been getting worse …. The water pumps run on electricity. When there is no power we don’t get water,” Salloum, 32, told L'Orient Today. “I lost hours when I could have had clients.”

The issue Salloum is facing in her mid-sized restaurant is likely to affect an increasing number of businesses and households as summer progresses.

Water shortages are expected to worsen across the country if no solution is found to electricity and fuel shortages that are putting water pumps out of action as Lebanon’s economic crisis persists, water officials told L'Orient Today.

“This has become a big problem and it will get worse if we stay on this path. We are now only able to provide 50 to 60 percent of the water we usually give,” Wassim Daher, director general of the South Lebanon Water Establishment, told L'Orient Today.

Daher’s warning comes after the South Lebanon Water Establishment issued a statement on Monday saying that most of its main water pumping stations have stopped operating due to interruptions in the state power supply and difficulties purchasing diesel to power generators.

Three of these four water establishments told L'Orient Today that the majority of their water pumps have been greatly impacted by power and fuel shortages. The South Lebanon, Beirut and Mount Lebanon, and Bekaa establishments all said they have had to slash the hours of operation for water pumping stations in the last month and warned of further reductions leading to longer and more widespread water shortages as power cuts continue.

The North Lebanon Water Establishment could not be reached for comment.

No electricity is tantamount to no water

The impending water crisis comes as Lebanon grapples with a debilitating financial crisis, the worst it has witnessed since the 1975-90 Civil War, which has left importers struggling to secure the necessary foreign currency to pay for fuel and other basic imports. Lebanon has also been plagued by chronic electricity shortages since the end of the Civil War, with Électricité du Liban running a large deficit due to faulty infrastructure, high production costs and insufficient revenue streams.

The state electricity provider is now only capable of supplying a few hours of power each day, forcing households and businesses to rely on costly private generators that require diesel to operate and scarce dollars to maintain.

But a nationwide fuel shortage — wrought largely, importers say, by the central bank’s delayed payment of invoices at a subsidized exchange rate — has left Lebanon’s water establishments, alongside many other industries, struggling to secure sufficient diesel to operate their generators for long enough to bridge the growing gaps in the state power supply.

“It’s a domino effect … the convergence of all of these issues is going to affect water resources,” explained Nadim Farajalla, the head of the Climate Change and the Environment Program at the Issam Fares Institute for Public Policy and International Affairs at the American University of Beirut.

“If I don’t have electricity to pump groundwater, or to pump water from springs to a reservoir, and then from that reservoir [to] pump that water to distribute it to people, then I may as well not have water,” Farajalla said.

Jean Gebran, director-general of the Beirut and Mount Lebanon Water Establishment said not enough diesel is being secured to operate generators due to shortages, which is impacting its ability to run its water pumping stations.

“In one month we need around a million litres of diesel. We are only getting 700,000 to 800,000 liters which is why we aren’t able to cover all the hours of water pumping for people,” Gebran said. “One month ago we were providing 10 hours of water pumping per day in Beirut. Now we are providing six hours due to the shortage of oil and electricity.”

“If we stay like this throughout the summer it’s going to be a big problem. People in the summer use a lot more water,” Gebran added.

Rizk Rizk, director-general of the Bekaa Water Establishment said there are 250 to 300 water pumps in the region and that “75 to 80 percent” of these are affected by electricity cuts.

“We are trying hard to manage but we are anticipating very hard days to come,” Rizk said.

The Bekaa Water Establishment in a statement on Monday called on the residents that it serves to reduce their water consumption and to “be understanding” of water rationing due to increased power cuts and fuel shortages that have impacted its ability to run pumping stations.

Similarly, in the south, Daher said that in the summer the establishment needs 2 million litres of diesel over the course of four months to operate its water pumping stations. If electricity cuts worsen further, it will need even more.

Alarmingly, however, what the establishment has been thus far able to secure is less than half of its anticipated minimum need.

Lebanon’s water establishments by law are autonomous, meaning they generate their own funds, Farajalla explained.

“The money they are generating now is from the fees they charge, which they receive in lira,” Farajalla said, adding that the value of the fees has decreased due to the economic crisis and national currency depreciation — the lira has lost more than 90 percent of its value since the second half of 2019.

In Beirut and Mount Lebanon collection rates are, for the moment, sufficient to cover diesel costs, Gebran said.

“If there is diesel, we can afford to purchase it for now, but the main issue for us currently is the shortage,” Gebran said. However, he cautioned that "if the situation gets worse, we may not be able to afford it in the future.”

In the Bekaa, however, tariff collection rates present a problem. Rizk estimates that the collection rate is at 30 percent in the region, making it difficult for the water establishment to afford diesel to operate generators.

“In the Bekaa, the establishment cannot afford to pay for the fuel. We don't have the same rate of collection here as in other areas,” Rizk said.

Rizk recalled in mid-May when “there were electricity cuts, I had to go to UNICEF [the United Nations children’s agency] to beg for 10,000 liters of diesel so we could turn the generator on for two or three days.”

‘There is no plan B’

Suzy Hoayek, an adviser to the energy and water minister, said that the ministry’s main strategy at the moment to redress water shortage issues is to seek assistance from international donors, including the European Union, the United States Agency for International Development, UNICEF and the Italian, German and Swiss embassies, to keep the water sector afloat.

Operating expenses — for pumps, spare parts and purchasing diesel — fall entirely under the mandate of the water establishment, Hoayek explained. However, in the last year the ministry has asked donors to fund water establishment operations for the first time due to the dollar exchange rate crisis, she said.

“Our strategy now is to have the donors help us. Everything we need is really dollars, everything required to operate these facilities is probably either imported or has a very high price,” Hoayek said.

But Hoayek said that what they have received from donors is not enough and will last only until September. After this, the ministry will need to appeal for more funding.

“We are not getting what we need, we are getting only a part of what we need…. We are trying to provide as much service as we have money [to provide],” Hoayek said.

“There is no plan B. I’m not going to create diesel from somewhere or get electricity from a new place … today without the donors’ support, everything in the water and the wastewater sector will fail.”

BEIRUT — Chantal Salloum was forced to close her restaurant, The Barn, in Beirut’s Gemmayzeh area for three hours last week when her water supply stopped. Due to increasingly frequent electricity cuts, the area’s power-dependent water pumps had stopped working for an extended period, causing her water storage tank to run empty.“The situation has been getting worse …. The water pumps...