Here’s what happened yesterday and what to expect today, Wednesday, May 5 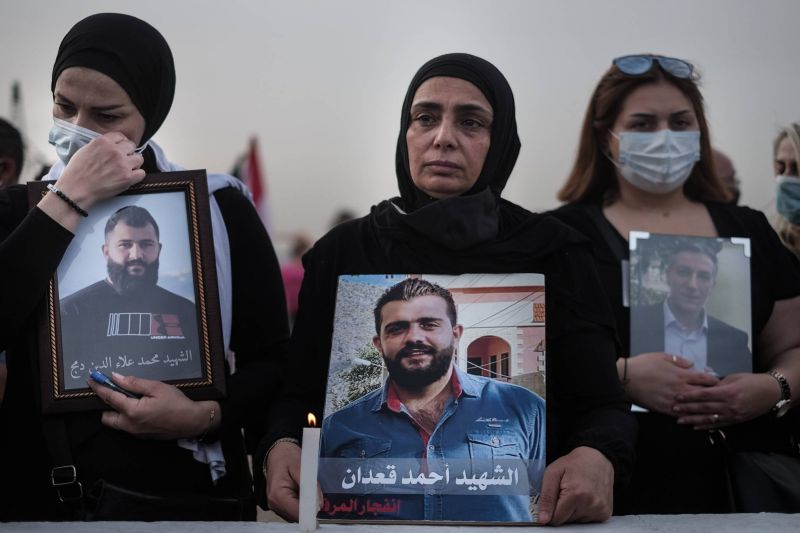 Families of victims gathered for a vigil on Tuesday at the epicenter of the Beirut port explosion, calling for transparency in the investigation into those responsible for the blast. (Credit: João Sousa/L’Orient Today)

Nine months after the Beirut port explosion, the lead judge investigating the blast has asked 13 countries to provide Lebanon with satellite photos from Aug. 4. President Michel Aoun previously said he asked French investigators to hand over images to help determine whether “foreign aggression” had played a role, although French diplomats told our sister publication, L’Orient-Le Jour, they had not received an official request. Marking the nine-month anniversary on Tuesday, family members of blast victims gathered for a vigil at the port. They called on Judge Tarek Bitar, who is leading investigations into the disaster, to push forward with his inquiry without succumbing to political pressure — though many say they are losing hope that those who were responsible will be held accountable.

Banque du Liban’s reserves fell by more than half a billion dollars in April, the most recent version of BDL’s balance sheet, released yesterday, shows. The plunge — totaling $513 million — means the central bank has fewer foreign assets to continue subsidizing basic goods such as wheat, oil, and medicine, and may be forced to discontinue the subsidy program as early as the end of this month. Meanwhile, inflation continues to soar, with an additional LL1.74 trillion entering in circulation in April alone. This puts the total lira outside the central bank at about LL38.24 trillion — more than triple the amount that was in circulation at the start of 2020. With the state’s subsidy program at risk, outgoing Premier Hassan Diab has put forward a proposal that would supplant current subsidies with direct payments to 750,000 of Lebanon’s poorest families — but whether the political will exists to iron out his proposal is unclear.

A fifth round of maritime border talks between Lebanon and Israel kicked off yesterday after a monthslong hiatus, amid calls from US mediators that both sides adhere to demarcation lines they originally proposed during the current negotiations. Last month, Lebanese ministers signed off on amendments to the original map submitted to the United Nations in 2011, calling for an additional 1,430 square kilometers, which the Israeli energy minister said has the potential to derail talks. Negotiations between the two countries over the potentially hydrocarbon-rich waters stalled in November after each side presented diverging maps for the border.

Syrian refugee children who do not hold legal residency in Lebanon may not be able to take official school exams. A report by Human Rights Watch and the Center for Lebanese Studies said the Lebanese Education Ministry is blocking students without legal status from sitting for the brevet and baccalaureate official exams, scheduled for July, which students must normally pass to continue on to secondary school and university, respectively. In previous years, the ministry has issued a waiver for this requirement, but it has not done so for 2021. Given that the United Nations estimates 80 percent of Syrian refugees living in the country do not have a residence permit, the decision could effectively end the educational aspirations of a large number of Syrian refugees in Lebanon.

Increased power outages may be on the horizon yet again after the Constitutional Council blocked a $200 million advance meant to enable the state electricity utility to purchase fuel. The council suspended a March law granting the treasury advance to Électricité du Liban based on an appeal filed by Lebanese Forces MPs. The MPs demanded clarity over how the advance would be funded, rejecting any use of the central bank’s mandatory reserves, which technically belong to commercial bank depositors, as its funding mechanism. An EDL source told L’Orient Today that the decision has “put us against the wall,” and that an inability to purchase fuel oil would mean “the collapse of electricity production,” though the source was unable to provide details on potential future rationing. Parliament’s energy committee will meet today to discuss the fuel situation.

Meanwhile, Parliament’s economy and trade committee will convene today to discuss a Saudi ban on Lebanese food imports. The Saudi government suspended imports of Lebanese produce on April 25 after discovering more than 5 million pills of Captagon, an amphetamine, stuffed inside pomegranate shipments. The kingdom said this was only the most recent incident in a raft of drug smuggling operations involving Lebanese shipments. Diplomatic efforts by Lebanese officials have so far failed to budge the kingdom’s decision — which, if it stretches deeper into the harvest season, may start impacting farmers already hard hit by the economic crisis.

Want to get the Morning Brief by email? Click here to sign up.Nine months after the Beirut port explosion, the lead judge investigating the blast has asked 13 countries to provide Lebanon with satellite photos from Aug. 4. President Michel Aoun previously said he asked French investigators to hand over images to help determine whether “foreign aggression” had played a role, although French...