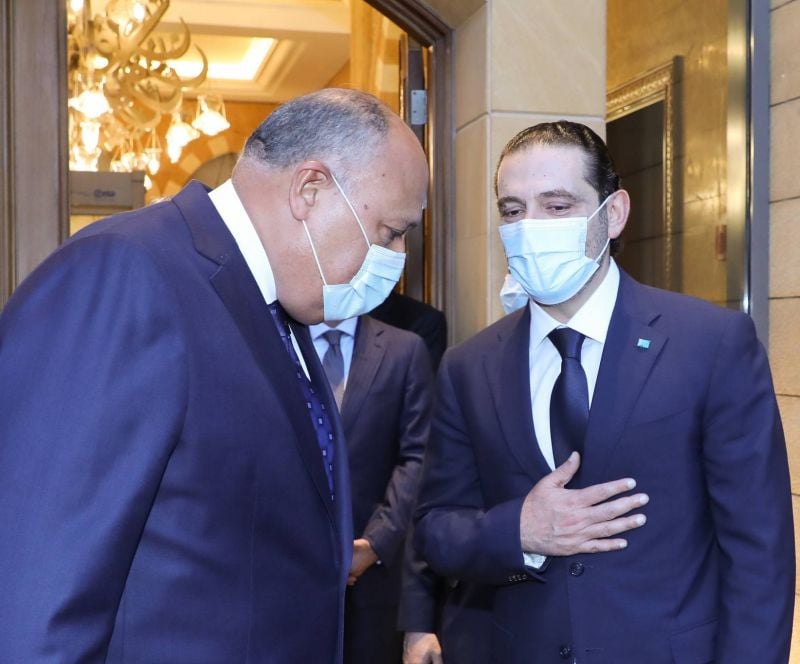 BEIRUT — In a high-profile visit to Lebanon on Wednesday, Egyptian Foreign Minister Sameh Shoukri implored Lebanon’s politicians to quickly form a government that can steer the country out of its worst economic crisis in decades, the latest in a flurry of international activity surrounding Lebanese politics.

“I conveyed … our concern in Egypt and at the regional and international levels over the continuation of the political crisis,” Shoukri said following his meeting with Berri. Shoukri said he stressed “the importance of working vigorously and swiftly to form a government of specialists in order to get out of this crisis.”

Lebanon has been without an empowered government since caretaker Prime Minister Hassan Diab’s cabinet resigned in the aftermath of the catastrophic Beirut port explosion in August.

Political bickering over the new government’s formation has dragged on while the country’s economy and national currency have plummeted to record lows.

Even before Hariri was designated prime minister — a post he previously resigned from amid mass protests that broke out in October 2019 — and tasked with forming a new government, he and Aoun were at loggerheads. Their faceoff has stymied the formation of the cabinet, whose composition must be agreed upon by the heads of state and government.

Shoukri’s visit is only the latest example of the international community ramping up pressure on the country’s ruling class to end the deadlock, paving the way for the formation of a ruling body that can enact desperately needed financial reforms.

Speaking before the French Senate on Wednesday, French Foreign Minister Jean-Yves Le Drian called Lebanon’s crises a result of “deliberate obstruction by the political class,” adding that “the decisions they take or refuse to take in the coming few days will be decisive.”

In late March, Le Drian, whose country has reportedly mulled slapping sanctions on Lebanese officials, had urged his European counterparts to take action to stave off Lebanon’s collapse.

Saudi Arabia has also been leading intensive diplomatic activity via its ambassador in Lebanon, Walid Boukhari. Boukhari has met with at least 23 ambassadors in recent weeks, including those from France and the United States. He has also met with several prominent Lebanese politicians, including Progressive Socialist Party leader Walid Joumblatt.

Arab League Deputy Secretary-General Hossam Zaki is set to arrive in Beirut on Thursday to hold talks with top Lebanese officials in an attempt to make headway in government formation efforts.

According to Ziad El Sayegh, a public policy expert, the international community is attempting to send a message to Lebanese politicians that “their legacy is no more” and to also send a strong message “to the Lebanese people … that they are not alone.”

Since being designated in October, Hariri has been pushing to form an 18-member government made up of “independent experts” in line with the French initiative to help Lebanon overcome its intersecting crises.

The aspiring four-time premier has publicly accused Aoun of stalling the formation of the government by insisting on gaining a “blocking third” share of seats in the cabinet that would grant him and his political allies veto power.

Aoun has denied this, however, with a Presidential Palace source telling L’Orient Today, “This is Hariri’s opinion, but it’s not the truth.”

The source said Joumblatt proposed a formula for a 24-member cabinet to Aoun two weeks ago. This would mean the cabinet would be divided into three groups of eight ministers, with each group allocated to either Aoun, Hariri or the Amal Movement, Hezbollah and their allies, the source explained. It would also ensure that no one group gained veto power.

The source said Aoun was on board with the 24-minister cabinet proposal, but that an official draft had yet to be presented to him.

When asked about the status of a potential 24-member cabinet lineup, a Future Movement source told L’Orient Today that the problem was not the number of ministers.

“The problem is that Aoun and Bassil’s side want the blocking third, it doesn’t matter if it’s a 24- or 20- or 18-member cabinet,” the source insisted, referring to the president’s son-in-law, Gebran Bassil, the current head of the Free Patriotic Movement, which Aoun founded.

BEIRUT — In a high-profile visit to Lebanon on Wednesday, Egyptian Foreign Minister Sameh Shoukri implored Lebanon’s politicians to quickly form a government that can steer the country out of its worst economic crisis in decades, the latest in a flurry of international activity surrounding Lebanese politics.During the trip, Shoukri met with Lebanon’s three top political leaders —...