What’s behind Riyadh’s recent frenzy of diplomatic activity in Lebanon?

An Arab diplomat takes stock of the underlying situation of the meeting between Walid Bukhari, Saudi Arabia’s ambassador to Lebanon, and President Michel Aoun 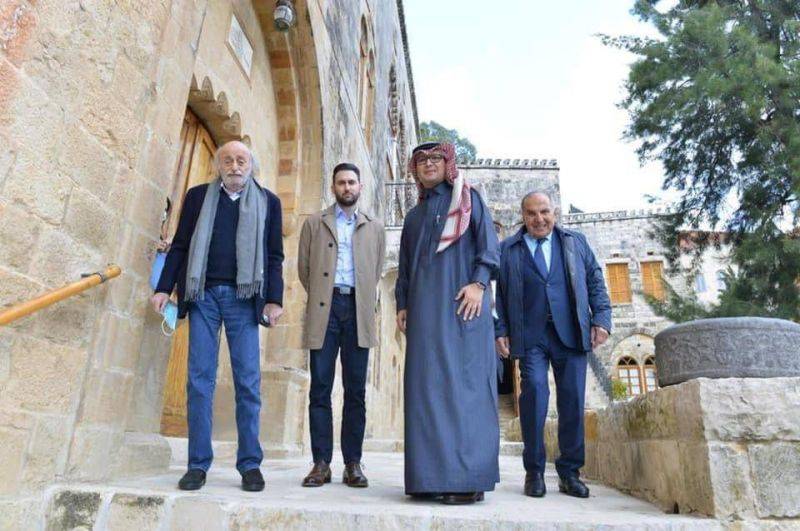 Saudi Arabia has recently been leading intensive diplomatic activity via its ambassador in Lebanon — something that might be some cause for concern.

In recent days, Saudi Ambassador Walid Bukhari has met with no fewer than 23 ambassadors, including those from France and the United States, and with several prominent Lebanese politicians, including Progressive Socialist Party leader Walid Jumblatt, on Saturday.

The Saudi envoy’s recent activity contrasts with the rather quiescent stance it has taken vis-à-vis Lebanon since a bizarre sequence of events in November 2017 when then Prime Minister — and now Prime Minister-designate — Saad Hariri was said to be held in Riyadh and coerced to resign from his post. The kingdom considered that the country was in the hands of Hezbollah.

Riyadh continues to reprimand Hariri for not cutting dialogue with the pro-Iran party, which the kingdom views as a threat. Since 2015, when war broke out in Yemen with Hezbollah involved on the Houthi rebels’ side, the kingdom has interpreted Lebanon to be under the Shiite party’s influence.

So, the pertinent question is: do the latest developments indicate a change in Riyadh’s approach toward Lebanon and Hezbollah? Nothing is less sure.

Without moderating its stance, however, Saudi Arabia appears keen to assess its options and possibly recalibrate its policy in the event of a breakthrough it deems favorable to its interests.

In other words, Saudi Arabia is currently acting to support the formation of a government in Lebanon that meets the standards of the international community.

Later, the kingdom will decide whether to cooperate with the cabinet based on its composition, political balances, ministerial declaration, program and capability to adopt truly effective policies.

All of the ambassadors who met with Bukhari stressed the need to support the French initiative, which involves significant structural reforms that will allow Lebanon to unblock international aid.

While Riyadh appears to be sticking to the technical aspects necessary for the formation of a new cabinet, it has also set its own political conditions concerning Hezbollah’s role in the government and conformity with United Nations resolutions.

According to a diplomat from an Arab country who asked not to be named, the ambassadors doubt Hezbollah is behind the government formation stalemate, although it has been alleged that the Shiite party is stalling the process pending the outcome of talks between the US and Iran.

“There has been discussion of possible joint European and Gulf sanctions on Lebanese officials accused of obstructing the formation of a government and involved in corruption cases,” the Arab diplomat says.

The Saudi ambassador’s recent diplomatic activities have generated a great deal of speculation in a country where the role of external players always tends to be exaggerated, and a meeting between Bukhari and President Michel Aoun on March 23 was no exception.

Aounists presented the visit as Riyadh’s support for Aoun in the standoff between him and Hariri. The fact that the meeting took place after a stormy encounter between the president and the premier-designate over the cabinet lineup lent credence to the Aounists’ portrayal.

The Saudi side, however, had a different story to tell. “This visit took place in response to an invitation from the president,” the Arab diplomat says.

In fact, the Presidential Palace had sent three invitations to Bukhari. The last invitation, which led to the meeting with Aoun, was addressed from the palace’s head of protocol.

In accordance with the Vienna Convention, which governs diplomatic relations, the Saudi ambassador could not, therefore, ignore it; to do so would have been viewed as an insult to the Lebanese head of state.

During the meeting with Bukhari, Aoun stressed that “Saad Hariri lacks the capacity to form a government,” adding that the latter’s recent trips to various capitals have been unsuccessful, according to concurring diplomatic sources.

Aoun also denied allegations that he wanted to benefit from a blocking third — effective veto power — in the government, saying that it was the French who dictated to Hariri the names of ministers in the cabinet lineup.

The president also expressed his willingness to pressure the premier-designate into quitting, adding that Parliament Speaker Nabih Berri is the only obstacle standing in the way of this.

Bukhari declined during the meeting to delve into these details, sticking to the kingdom’s stance on the need to form a government in line with the international requirements and engage in a reform program.

The Arab diplomat is keen to point out that Riyadh does not oppose Hariri being the head of a government and that a meeting with him would take place depending on the formation of a cabinet.

From his point of view, it is Hezbollah that has been pitting Aoun against Hariri, pushing him to take an intransigent position and therefore jeopardizing the French initiative — something denied by a source close to the Shiite party.

The war in Yemen

The Aounist camp’s interpretation of the meeting between the two senior officials was frowned upon by the Saudi Embassy in Beirut, which considers leaking false information to be contrary to the most basic rules of diplomacy.

“By circulating unfounded rumors, the presidency has undermined the highest Christian post in the country. Such behavior reflects the ineffectiveness and failure of the presidential team as well as the Free Patriotic Movement to find a solution to the government impasse, showing a total lack of will to resolve this matter. It also exhibits submission to foreign stakeholders that aim at exacerbating the internal crisis over small calculations,” the Arab diplomat says.

According to sources close to the Saudi ambassador, the envoy viewed these leaks as an attempt to discredit certain national parties, with the sole aim of thwarting the French initiative.

On a more tactical level, during the meeting with Aoun in Baabda, the Saudi ambassador managed to extract a favorable position from the Lebanese president vis-à-vis the Saudi initiative aimed at putting an end to the war in Yemen.

Bukhari was mindful of announcing this loud and clear in a statement at the end of the meeting with Aoun, which prompted a response from Muhammad Ali al-Houthi, a member of Yemen’s Houthi Supreme Political Council.

“The statements of the Saudi ambassador in Lebanon are positive if they were backed with actions,” Houthi said, calling, however, on the Lebanese parties not to accept any proposed solution at any price.

Saudi Arabia has recently been leading intensive diplomatic activity via its ambassador in Lebanon — something that might be some cause for concern.In recent days, Saudi Ambassador Walid Bukhari has met with no fewer than 23 ambassadors, including those from France and the United States, and with several prominent Lebanese politicians, including Progressive Socialist Party leader Walid...