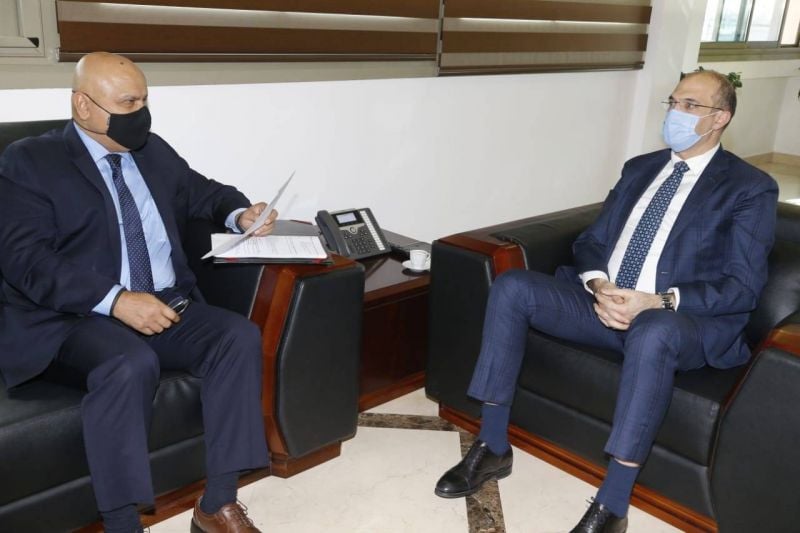 BEIRUT — The World Bank has given Lebanon’s Health Ministry until Thursday to disclose in advance the allocation of COVID-19 vaccines for each inoculation center and to provide the schedule of the ministry’s mobile vaccine clinics ahead of time.

The move comes as politicians attempt to downplay a scandal that erupted last week over the inoculation of Lebanese MPs in an apparent violation of the national vaccination program, which could jeopardize World Bank financing.

“[The Health Ministry] needs to publish the data [at the] latest by March 4,” Saroj Kumar Jha, the World Bank’s director for the Middle East, told L’Orient Today. “Going forward, we are requesting disclosures on each vaccination center and the schedule of the mobile clinic.”

He added that this should be provided on at least weekly basis.

The World Bank also asked the Health Ministry to consult with Lebanon’s national vaccination committee on any deviations from priority groups listed in the country’s inoculation plan.

Jha said the World Bank notified the ministries of health and finance, as well as the caretaker premier and deputy premier, of the deadline in an official letter.

The Health Ministry could not be reached for comment on the letter.

The World Bank’s deadline follows on the heels of the Feb. 23 vaccination of a dozen politicians, who are accused of jumping the queue when they received doses from a mobile clinic sent by the Health Ministry to Parliament.

Jha told L’Orient Today last week that these vaccinations were a violation that could jeopardize the World Bank’s $34 million in financing for Lebanon’s inoculation program.

Caretaker Health Minister Hamad Hassan, for his part, claimed Thursday that no breach had occurred, while insisting that the country’s vaccination program was not under “international guardianship.”

Domestically, lawmakers have skirted responsibility for the vaccine scandal, with many saying it was the Health Ministry’s decision to vaccinate the MPs.

MP Anis Nassar (LF bloc/Aley), one of the politicians inoculated last week, said he took the vaccine in good faith.

“I got a call from Parliament and they said your turn is tomorrow, and I went down to get the vaccine,” Nassar said. “If there was any wrongdoing, it’s at the Health Ministry level.”

Vaccine queue jumping scandals have emerged globally, causing officials to resign or be removed from their posts. Argentina’s president fired the country’s health minister for personally arranging COVID-19 vaccines for VIPs with government connections. In Peru, the health and foreign ministers resigned after senior politicians were secretly inoculated before vaccines were publicly available.

But in Lebanon, it seems that politicians have little intention of holding MPs or the Health Ministry accountable for the apparent violation.

According to Article 131 of Parliament’s bylaws, MPs are able to hold oversight hearings to interrogate ministers. The regulation stipulates that “every MP … may request to question the government as a whole, or one of the ministers, on a specific issue.”

Free Patriotic Movement MP George Atallah said that while the queue-jumping was the “joint responsibility” of the Health Ministry and the MPs who took the vaccine early, “there is no decision yet on whether we will take the action to question them.”

“I don’t think this will happen again,” the MP said.

Atallah insisted that his party’s deputies were not responsible as none of them were vaccinated last week. “We refused to participate and none of our guys went down to get the vaccination,” he said.

The FPM politician disavowed his party’s ties to Deputy Parliament Speaker Elie Ferzli, the highest-ranking politician to be vaccinated on Feb. 23 at Parliament. After the scandal broke, the 72-year-old Ferzli went on to make a series of angry statements to the media, including calling the World Bank’s regional director a “liar and hypocrite” while making fun of the Indian national’s name.

“He is not FPM,” Atallah said of Ferzli. While not a party member, Ferzli is a member of the FPM’s parliamentary bloc, and won his seat in Parliament in 2018 running on an electoral list backed by the FPM.

Meanwhile, the head of Parliament’s health committee dubbed the controversial vaccinations a “mistake” while saying he wanted to move past the incident.

The committee chair said that “the health minister took the decision,” but added, “We don’t want to look to the past; we need to look to the future … and make sure this doesn’t happen again.”

Asked whether he is looking to question the officials who violated the vaccine rollout plan, Araji said, “Let’s not get into details of who said what. … Yes, a mistake was made; we are trying to correct it.”

“If this violation happens again, then the Health Ministry will take responsibility,” Araji said.

Amal MP Fadi Alame said the vaccinated parliamentarians had “nothing to do with” with last week’s apparent breach of the national inoculation program, adding that it was a “decision by the Ministry of Health.”

“One of the key issues is with the mobile vaccine clinics. … They also need to be part of the [vaccine registration] platform,” the MP said.

“It should have been transparent and part of the plan. At the end of the day, the Health Ministry is in charge of implementing the plan,” Alame said.

Lebanon was the first country worldwide to receive World Bank funding for its vaccine program. So far, just over 100,000 doses of the Pfizer-BioNTech COVID-19 vaccine have been delivered to Lebanon, out of a total of 2.1 million set to arrive by the end of the year.

These doses are meant to go first and foremost to front-line health care workers and people over the age of 75. Those found eligible are invited to make an appointment at a registered inoculation center.

BEIRUT — The World Bank has given Lebanon’s Health Ministry until Thursday to disclose in advance the allocation of COVID-19 vaccines for each inoculation center and to provide the schedule of the ministry’s mobile vaccine clinics ahead of time.The move comes as politicians attempt to downplay a scandal that erupted last week over the inoculation of Lebanese MPs in an apparent violation of...