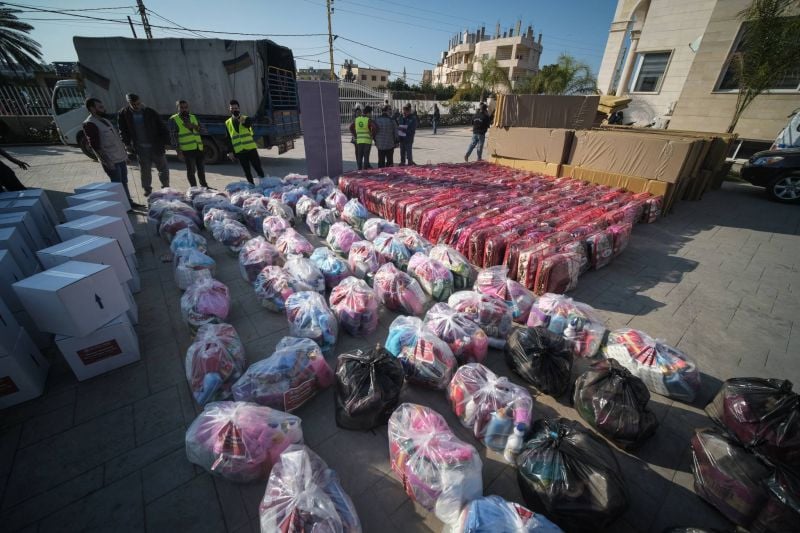 BEIRUT — Some humanitarian aid initiatives have ground to a halt after the Ministry of Interior and Municipalities issued a requirement last week that organizations seeking permission to provide aid during the lockdown must submit a list of beneficiaries, including names and detailed identifying information.

Officials with the United Nations and NGOs operating in Lebanon told L’Orient Today that to comply with the requirement would be a breach of aid recipients’ privacy and the confidentiality of their personal data, which humanitarian actors are mandated to protect.

A spokeswoman for UN Resident and Humanitarian Coordinator for Lebanon Najat Rochdi told L’Orient Today in a statement that Rochdi has “expressed officially concerns, as protection of privacy and personal data is a principle we won’t compromise as UN. She is discussing with the Ministry of Interior and Municipalities how to handle the issue while supporting the lockdown and the need to restrict the movements only to critical activities.”

"The new permission system for NGO activities concerns us for two reasons: it further delays urgent humanitarian assistance and it requires us to share personally identifiable information of beneficiaries, which is a clear red line for humanitarian organisations,” said Carlo Gherardi, the Norwegian Refugee Council’s Lebanon country director.

As a result of the new rules, he said, the NGO had halted some of its activities, including those “which are supporting the fight against COVID, like the provision of water, hygiene and disinfection kits.”

When asked about the permit requirements, Mohamed El Cheikh, director of Interior Minister Mohamed Fehmi’s office, said there was no reason for the UN or NGOs to complain.

“We are issuing the permissions,” he said. “We are requesting some information just to know what they are doing. We don’t want to just permit them to work, and they are doing nothing.”

As for why the ministry wanted the beneficiaries’ personal information, Cheikh said it had been requested by the Ministry of Social Affairs.

Assem Abi Ali, the general supervisor of the Lebanon Crisis Response Plan at the Ministry of Social Affairs said that was untrue.

“The Ministry of Social Affairs does not have anything to do with this. This is [a decision] exclusively done and taken by the Ministry of the Interior,” he said. “They have their own reasons why they requested such information.”

Lebanese government officials and agencies have been periodically at odds with the UN and NGOs working in the country, particularly those working with refugees. In 2018, then-Foreign Minister Gebran Bassil ordered residency permits to be frozen for UN refugee agency (UNHCR) staff, claiming that they had been scaring refugees out of going back to Syria. The following year, amid a crackdown on foreigners working without work permits, General Security officers began visiting NGOs, particularly those working with refugees, and questioning them about their staff and activities.

Syrian refugees would be in a particularly vulnerable position if their information were to be shared with authorities, since about 80 percent of those living in Lebanon do not have legal residency. The Directorate of General Security has in some cases deported Syrian refugees who were found to have entered or remained in the country illegally.

However, in previous COVID-19 lockdowns, aid organizations had relatively wide leeway to operate. That changed with the stricter lockdown that began on Jan. 14.

The lockdown order initially exempted UN staff engaged in “critical program delivery and operational activities” but did provide an exception for NGOs. Eventually, a list of specific NGOs was also granted exemptions for “critical humanitarian interventions,” but staff members still had to apply for a permit for each mission.

A source working in the humanitarian field, who asked not to be named because they are not authorized by their organization to speak to the media, said that there was no reason not to give a wider exemption for aid organizations during the current lockdown as had been done in past closures.

“The entire humanitarian community must be outside the system, we must deliver life-saving aid to those who are most vulnerable and at risk," the source said. “The work of humanitarian aid agencies must be facilitated and supported, without administrative controls that really reduce our ability to respond.”

The new procedures launched last week allow organizations to apply for a weeklong authorization rather than separately for every activity, which in theory should make their work easier. But it came with the added requirement to send an Excel sheet listing the name, identification number, address, nationality, and other information for each person who would be receiving assistance.

Initially both UN agencies and NGOs were required to submit the beneficiary list. While the requirement was later removed for UN agencies, it remains in place for NGOs. In practice, NGOs provide the bulk of the relief services on the ground, from food distributions and running medical clinics to responding to flooded refugee camps after winter storms.

Those services have been in increased demand amid the lockdown. A survey of 160 Syrian refugees during the closure found that only 2 percent were working during the lockdown; one-third said the closure had impacted their ability to access needed services, most commonly health care; and some reported that they had been unable to buy heating fuel, either due to lack of money or restrictions on movement, said Elena Dikomitis, the Norwegian Refugee Council’s advocacy adviser in Lebanon.

“The timely delivery of assistance to refugees who are fully reliant on humanitarian aid is essential,” Gherardi said. “Delayed assistance is already having consequences for the most vulnerable families.”

BEIRUT — Some humanitarian aid initiatives have ground to a halt after the Ministry of Interior and Municipalities issued a requirement last week that organizations seeking permission to provide aid during the lockdown must submit a list of beneficiaries, including names and detailed identifying information.Officials with the United Nations and NGOs operating in Lebanon told L’Orient Today...