A storm at the Lebanese National Conservatory

Faced with the country’s economic crisis, the pioneer music institution is currently marked by a wave of strikes, which the conservatory’s new head Hiba al-Kawas met by firing the strike leader.

Edy Dorlian, president of the Conservatory Teachers' League, at a press conference to defend the open strike movement on Jan. 11, 2023. (Credit: DR)

“It is an arbitrary decision and contrary to freedoms,” Edy Dorlian, whose contract was terminated on Friday “without prior notice or warning,” told L’Orient-Le Jour. The other six members of the League were informed by phone that they would be summoned to appear before the conservatory’s executive committee for questioning.

The teaching staff is protesting the fact that they have not benefited from salary increases like other public sector employees. Instead, their salaries have eroded due to the national currency’s collapse against the US dollar.

‘No room for dialogue’

“We cannot afford such protest actions at a time when the cultural identity of Lebanon is threatened. The conservatory is the guarantor of this and, in this context, we must redouble our organization and commitment,” Kawas told L’Orient-Le Jour. She added she regretted not having imposed sanctions “earlier,” as soon as she took office in summer 2022. 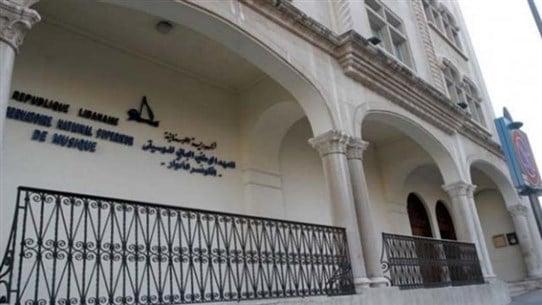 “There is no room for dialogue with management, which knows only repression and threats in the face of demands concerning the most basic needs” of teachers, added Dorlian.

Following the decision of the conservatory’s executive committee to fire him, Dorlian, a guitarist, decided to appeal it before the State Shura Council. He also threatened that he will file a defamation suit.

Pianist Lisa Tutundjian, a member of the teachers’ league, said that none of the 250 employees has yet acquired civil servant status, “despite promises made for decades.”

Founded nearly a century ago by Wadih Sabra, the composer of the Lebanese national anthem, the conservatory has played a major role in the country’s music history, accompanying the work of musical giants, including the Rahbani brothers and Majida al-Roumi, and shedding light on Lebanese culture around the world.

A year without electricity

Placed under the supervision of the culture minister, the conservatory, a public institution, has administrative and financial autonomy. However, none of its employees have benefited from the increase in public sector salaries that began a year ago to remedy the depreciation of the national currency.

“All the teachers are temporary workers paid LL30,000 per hour, while the dollar exchange rate has exceeded LL50,000 on the black market,” said Tutundjian, whose monthly salary after 25 years of service is now equivalent to $60.

“Some have been living without electricity for a year because they have not received wage compensation for 2022. They can’t afford to pay generator bills and therefore find themselves unable to give online classes.”

“During the health crisis, we didn’t get our salaries either. The teachers continued to teach online courses on their own without any supervision,” one former teacher, who left the institution a year ago to give private classes, said on condition of anonymity.

“Hiba al-Kawas is brilliant and talented, but she is making a mistake by believing that she can achieve her goals through fear,” the former teacher said.

After a first strike in Oct. 2022, the conservatory’s new management finally accepted a demand that the teachers work only one day a week in person and give the rest of their courses online, in the absence of compensation for transport costs. But Kawas reportedly deducted the days on which they were strike from the December salaries, without paying a customary end-of-year bonus either.

Then, in early January, the teachers declared open strike to demand the increase in salaries announced by a cabinet decree, following the efforts by Kawas only six months after she took office.

“The payment of the new salaries will depend on whether the cabinet will meet this week. A salary increase has been agreed starting January 2023, as well as a compensation for the past year, in the hopes that these sums will arrive in the coming weeks,” Kawas said.

“In the meantime, I will sanction all those who undermine the proper functioning of the institutions. Stopping work for more than 15 days is a violation of the law,” she added, convinced that she is thus fighting “the scourges of corruption and theft of public money that plague the country.”

“I could have done the same as others and joined the strike, but what would we have achieved? These popular slogans that play on resentments lead nowhere. I made the difficult choice to take action, defying all the circumstances, to make the higher music institute a high-level teaching center in the Middle East.”

However, the strikers do not intend to stop there. “We will support Mr. Dorlian’s appeal to the State Shura Council in order for it to annul this decision that is contrary to the Constitution and public and trade union freedoms,” said General Federation of Lebanese Trade Unions head Maroun al-Khouli.

“For this [end], we plan to meet with the [caretaker] culture minister and prime minister, in order to reaffirm our position and improve the union action within the conservatory.”

Faced with the open strike that the Lebanese National Higher Conservatory of Music’s Teachers League started Jan. 3, interim head of the Lebanese National Higher Conservatory of Music Hiba al-Kawas fired the leader of the protest, after 30 years of work at the institution.“It is an arbitrary decision and contrary to freedoms,” Edy Dorlian, whose contract was terminated on Friday “without...