‘Simplicity and solidarity’: An Italian feast in Lebanon reveals the shared fundamentals of the countries’ culinary traditions 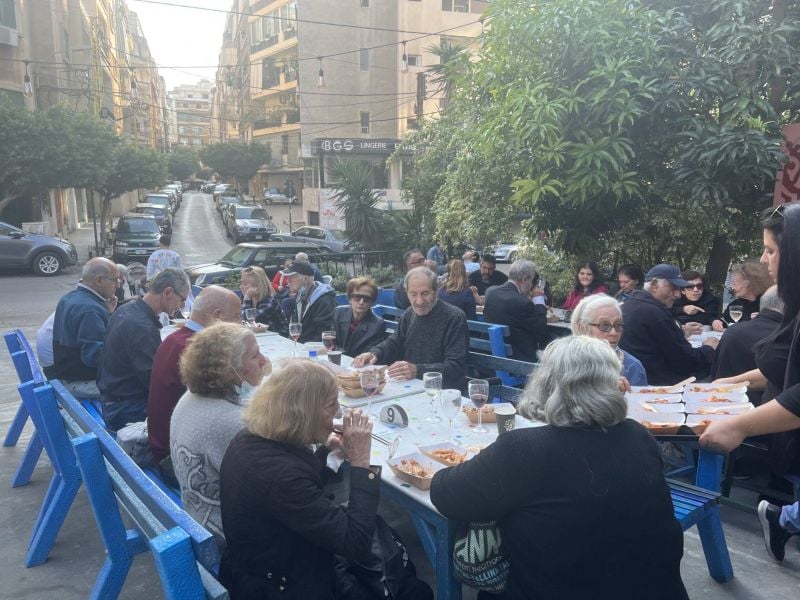 BEIRUT — On a sunny Sunday afternoon in mid-November, around 40 elderly people chat animatedly at tables dotted with glasses of white and red wine outside what used to be a gas station in the Beirut neighborhood of Geitawi. Mere days after the Beirut blast destroyed large swathes of the neighborhood on Aug. 4, 2020, the abandoned gas station was turned into “Nation Station” – a grassroots initiative which soon became a hub for volunteers and activists to come together.

“Italian food is a perfect tool to focus on solidarity,” Italy’s ambassador to Lebanon, Nicoletta Bombardiere, says. Today’s “solidarity lunch” is co-organized by the Italian Embassy as part of the seventh edition of the World Week of Italian Cuisine. “Italian food is based on simplicity. It’s very accessible, it’s very affordable. And it’s based on natural ingredients, which combines traditions as well as innovation,” Bombardiere adds, while looking over at the tables that are slowly starting to fill up with il primo, a simple plate of pasta, which is incidentally Bombardiere’s favorite dish, she says.

“Pasta is a happy meal as it really allows you the opportunity to personalize and customize it in a thousand different ways. It can be very light and very healthy and it’s not expensive. And you can make it with the Lebanese local ingredients as well,” Bombardiere says. “It really is the ultimate comfort food.”

Meanwhile, Nation Station’s co-founder Mazen El Murr is making sure the kitchen is running smoothly, and chats with guests too. Nation Station has grown into a bonafide organization since its early makeshift days, when it ran on ad hoc volunteers and funding, amid the chaos and desperation that followed the blast. Now, he says, they get funding from several international organizations, which allows them to feed people, 75 percent of whom are elderly. “We actually have a waiting list of about 100 people in the neighborhood who can’t afford to eat,” he adds. 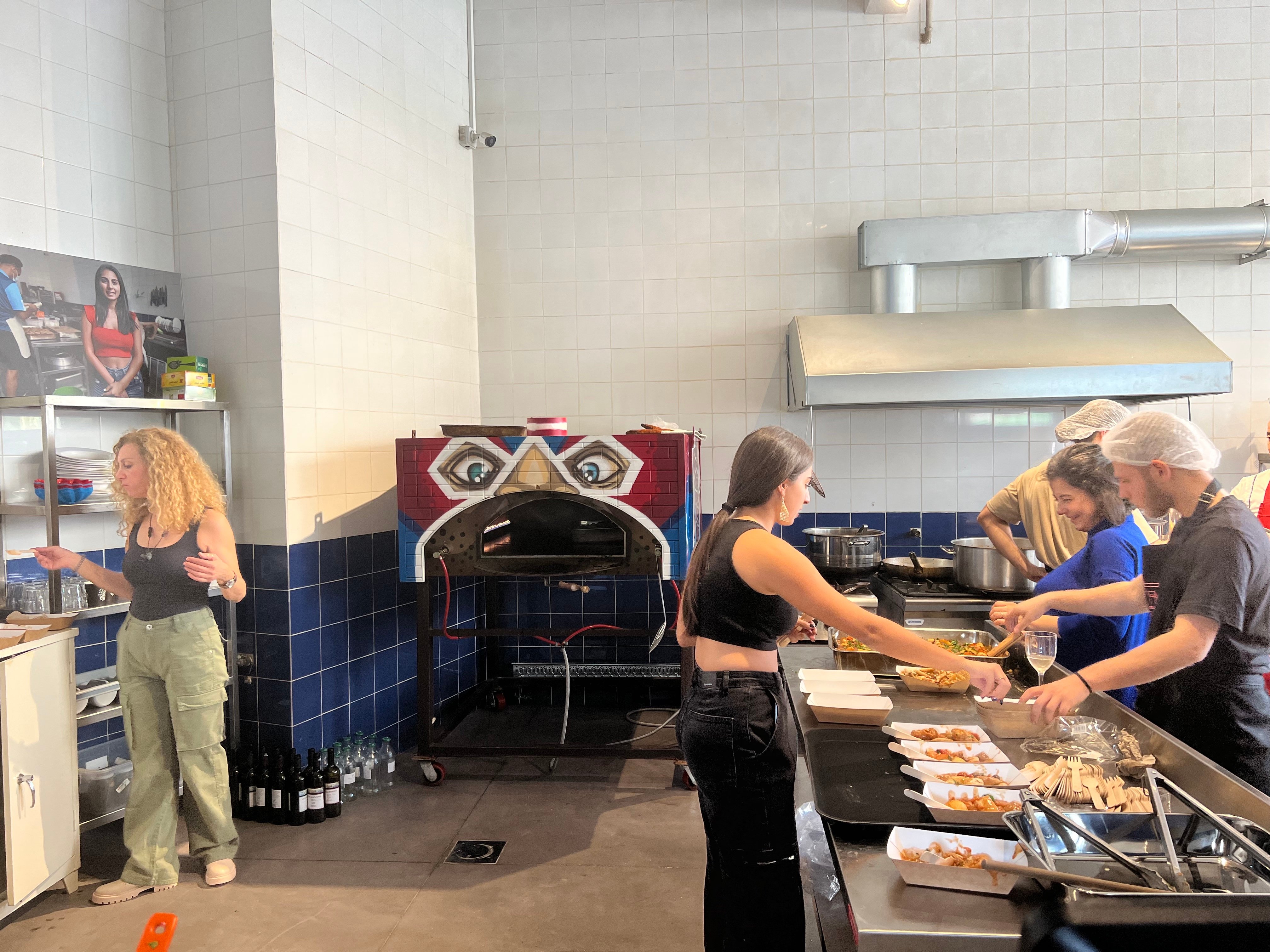 As the evening winds down, and many have gone home, Samia, an 84-year-old resident of Geitawi, is enjoying one last chilled glass of white wine and a tiramisù with a slightly Lebanese twist: instead of ricotta, chef Massimiliano Bugliosi used yogurt and added a layer of pistachio crumbs. Samia — “like Samia al Gamal” [the famous Egyptian belly dancer and movie star], she says, launching into the juicy details surrounding al Gamal’s feud with Hind Rustom [her fiercest rival] — came here more for the company than with the food, she explains. “I often feel lonely,” she says. “My children are always working and, although they take care of me, I don’t want to bother them for every single thing.” She says Nation Station provides a place to sit and chat with other residents, to escape the monotony of a house with barely any electricity.

A tiramisù with a slightly Lebanese twist is served. (Credit: Farah-Silvana Kanaan/L'Orient Today)

Murr says that in addition to the social context, many elderly come to charge their phones, due to a lack of state-provided electricity. “Many of them are very lonely, and the number of elderly who have a hard time surviving keeps growing due to the financial crisis.” While he is very happy to see that organizations are willing to fund Nation Station and put their trust in the project, so they can provide more structural support to the neighborhood’s residents, he says that his and his colleagues’ ambition is a result of “needs not dreams.” In other words, although he loves what he does and is entirely dedicated to it, aside from his job as an architect, he wishes that Nation Station was not necessary. “But with a completely absent government like ours, we have no choice but to step in ourselves.”

Italian classics like “Volare” and the soundtrack of Cinema Paradiso, a film many Lebanese can relate to, with its themes of forced migration and the diasporic existence fed by nostalgia [one particularly poignant scene from the movie is often widely shared on social media] add some flair to a beautiful Sunday afternoon filled with laughter and stories in a neighborhood that still bears the scars of the explosion.

Italian Trade Commissioner Claudio Pasqualucci, who has been here for a year and a half and hails from Rome, cannot stop smiling. “I love this city and this country, as a Roman I feel right at home. We share the same culture, the same love of good food, and a great sense of solidarity.”

Pasqualucci says he came to Lebanon “not despite the crisis, but because of it,” knowing he could contribute more here than just focusing on commercial trade, even though that is obviously one of his main tasks. He says that, although it is happening “very slowly,” there has been an uptick in trade compared to the same time last year. “A lot of our work is behind the scenes, we’re trying to get to a place where Italy becomes one of Lebanon’s largest trading partners, which is the way it was before the crisis.”

The two countries have always shared a special relationship, in fact Italy and Lebanon shared the first “friendship agreement” between a European and an Arab state after World War II.

Additionally, Pasqualucci says, there are shared historical and cultural roots. “There’s also the human aspect, the warmth and hospitality of both peoples. We understand each other, we are both historically explorers and are used to doing commerce, it’s in our blood.” While enjoying a plate of pasta alla norma [pasta covered in marinara sauce with roasted eggplant sprinkled with salted ricotta], a veritable staple of Sicilian “food of the poor” which, he says, is another thing the countries share: a strong appreciation of simple food, rather than gourmet cuisine.

Considering further similarities between the countries, he adds that, as a Roman, he gets very emotional when he visits the many Roman ruins in Lebanon. “There’s an almost visceral link between our countries. And here, looking at us eating and chatting together, even when we don’t all speak the same language, you feel it. It’s heartfelt.”

CORRECTION: An earlier version of this article incorrectly named the chef who prepared the tiramisù with a Lebanese twist. Massimiliano Bugliosi prepared this dessert, not Gianni Tamburini as originally stated.

BEIRUT — On a sunny Sunday afternoon in mid-November, around 40 elderly people chat animatedly at tables dotted with glasses of white and red wine outside what used to be a gas station in the Beirut neighborhood of Geitawi. Mere days after the Beirut blast destroyed large swathes of the neighborhood on Aug. 4, 2020, the abandoned gas station was turned into “Nation Station” – a...