Caretaker Social Affairs Minister Hector Hajjar said that some refugees were prevented from going back to Syria because of legal issues with the Syrian authorities. 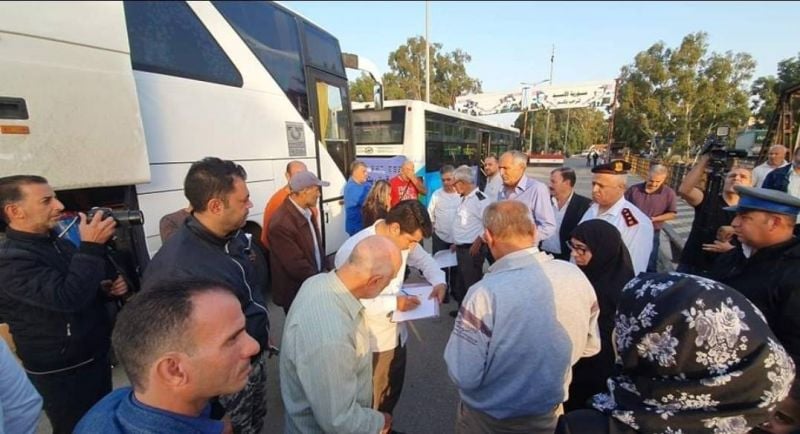 According to the NNA, the intelligence branch of Lebanon's Internal Security Forces (ISF) accompanied a bus Wednesday morning from Nabatieh to the General Security branch at the Masnaa Border Crossing on the Lebanese-Syrian border in the Bekaa Valley.

Separately, 12 Syrian refugees were repatriated on Wednesday from the al-Aboudiyeh Border Crossing in North Lebanon after taking off from Tripoli, L'Orient Today's correspondent in the area reported.

On World Refugee Day, a look at where Lebanon’s Syrian refugees stand

In Arsal, another group returned to Syria, caretaker Social Affairs Minister Hector Hajjar told L'Orient Today Wednesday morning. "This is a purely national day," Hajjar was quoted as saying Wednesday by the NNA. "The processions of voluntary trips to the Lebanese-Syrian border point have begun," Hajjar reportedly said. "There are other [repatriation] groups, and we will continue."

Caretaker Social Affairs Minister Hector Hajjar told L'Orient Today that the majority of the returnees from Arsal are going back to the Qalamoun, a region bordering the border with Lebanon, on the Syrian slopes of the Anti-Lebanon mountains. "Those whose houses there were destroyed have their tents to live in," Hajjar said.

He explained that because it is the first day of repatriation, "there are some logistical issues going on which limit the amount of returnees." According to him, around 1,000 people had left Arsal. Hajjar also said that some people were prevented from going back because of legal issues with the Syrian authorities. "These issues will be settled. If not, the concerned refugees won't be sent back," Hajjar said.

According to Reuters, some 700 Syrians who had agreed to cross over gathered early Wednesday morning in a remote northeastern border zone.

'More than 89 percent of refugees want to be repatriated,' says Syrian ambassador

However, rights groups have criticized the returns as potentially dangerous. “In enthusiastically facilitating these returns, the Lebanese authorities are knowingly putting Syrian refugees at risk of suffering from heinous abuse,” human rights watchdog Amnesty International said earlier this month, decrying the plan despite its apparent emphasis on voluntary return.

General Security chief Abbas Ibrahim responded to international criticisms on Tuesday, claiming the trips are in “the interest of the Lebanese people.”

Syrian refugees in Lebanon have reported faced discriminatory practices including “arrests at checkpoints … raids on camps, adoption of stricter movement rules, and tensions between host and refugee communities, the Access Center for Human Rights, a refugees watchdog group in Lebanon, told L'Orient Today in August.

‘Simplicity and solidarity’: An Italian feast in Lebanon reveals the shared fundamentals of the countries’...

Why Lebanon hasn’t reformed its school curricula in 25 years

Three actions against banks by depositors in Lebanon, negotiations underway