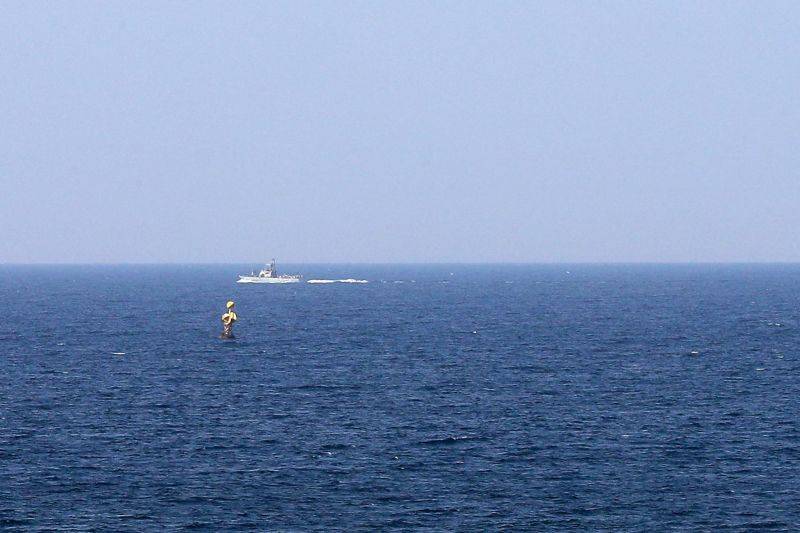 An Israeli military vessel on patrol off the coast of Naqoura, near the "line of buoys," Oct. 3, 2022. (Credit: Mahmoud Zayyat/AFP)

The relative security stability brought about by the US-mediated maritime agreement with Israel is, of course, welcomed by the Lebanese people who are exhausted from decades of violence and threats of violence designed to stifle any inclination to break communal allegiances.

But this stability is the result of arrangements by political stakeholders and regional powers that go beyond the Lebanese state itself, once again confirming its failure.

The agreement was negotiated by various poles of the zuama (sectarian leaders) political establishment, which monopolized the institutions and captured their resources, while impoverishing the country, with complete impunity.

The way the maritime file has been managed for more than 15 years, with its many errors and reversals of positions, is symptomatic of the decay of the state.

It is undeniable that the very existence of a maritime agreement with Israel closes a page of uncertainty accompanied by real threats.

This outcome was far from guaranteed given the chaotic trajectory of the management of the negotiations, and the extremely volatile geopolitical environment.

But the answer to the question of whether the agreement is the best possible option for Lebanon is inseparable from the conditions in which it was handled.

One thing is certain: the dividing line is not based on international law, which combines technical data and legal rules to define the concept of equity.

A negotiation based on international law would have focused on the degree of effect granted to Tekhelet, taking into account in particular the investments already made by Israel in the Karish field.

This could have offered more maritime space to Lebanon with, for example, a final border giving half effect to Tekhelet, which would have preserved the entire field of Qana in Lebanon.

By refraining to base the talks on Line 29 — identified since at least 2011 — Lebanon deprived itself of the only valid and effective weapon of international law. This also sets a precedent for Lebanon’s future negotiations with Cyprus and Syria.

Contrary to what the authorities claim, Lebanon has not obtained full rights to the Qana field and the agreement relies on Israel's good faith to facilitate the exploration and production process.

The agreement makes it clear that Israel has rights to the cross-border fields, starting with the "prospect" (Qana).

This means that Lebanon will be affected by the agreement between TotalEnergies and Israel without having any say in it. However, it is not known whether the Exploration and Production Agreement with the consortium will have to be amended and on what points, in order to incorporate TotalEnergies' commitments to Lebanon and Israel.

The text of the agreement relies on the "good faith" of the parties and in case of dispute, only the US is called upon as mediator, with no other framework than a "positive and constructive atmosphere."

The text also imposes conditions on Lebanon regarding the choice of operators, excluding the possibility that the consortium is composed or led by a Lebanese company. This explains why negotiations have been held with Qatar to join the consortium.

In the medium term, the scope of a future National Oil Company remains unknown.

Similarly, and again contrary to what has been stated, Lebanon has made a concession regarding its land border. International law dictates that the maritime border starts from the land border.

By agreeing to enter into this scheme, Lebanon concedes that there is a dispute, even though international law was in its favor. Acknowledgment of the conflict is therefore a step backward.

Why Hezbollah gave the green light to an agreement with Israel

The text of the agreement de facto enshrines the "line of buoys," by referring to a "status quo" on this subject.

International law is very clear about the border point: It is located at Ras Naqoura, according to the Paulet-Newcombe Treaty of 1923 between the Mandatory Powers of the time and taken up by the Armistice Agreement of 1949 between Lebanon and Israel.

Finally, this agreement is presented as the solution to Lebanon's economic and financial problems. Nothing could be further from the truth.

Projections are very difficult before a tangible discovery is made, but the estimates of experts, such as the one made for the Lebanese Oil and Gas Initiative (LOGI) and Kulluna Irada, force us not to believe in the mirages of those who want to exonerate themselves once again of their responsibility for the unprecedented crisis imposed on the Lebanese.

In the best-case scenario, based on the discovery of 16 trillion cubic feet (TCF) at $6 per million British thermal units (BTU) — knowing that the estimate for Qana is around 1.5 to 2.5 TCF — Lebanon could count, not before 2030, on $6 to $8 billion spread over a 15-year period.

By comparison, losses in the financial sector amount to $72 billion.

So, the agreement will have no impact on the dollar/lira rate in the short term. And it certainly doesn't pave the way for prosperity.

Like all countries that become hydrocarbon-producing countries, the primary threat to Lebanon is the "resource curse."

The only way to avoid this is to reform the state, starting with the restructuring of public finances, the financial sector, and the economic and social model.

The way Novatek's share of the TotalEnergies-led consortium — which holds the rights to Blocks 9 and 4 — was transferred to the Lebanese state, and the terms of Qatar's eventual onboarding, mark a key first step in the new phase resulting from the maritime border agreement.

It is absolutely crucial for Lebanon that this process takes place within a framework of good institutional governance and transparency in public procurement, starting with a truly independent and institutionally empowered Lebanese Petroleum Authority.

Let's not forget that the LPA’s mandate expired in December 2018 and that its track record is tainted by the sectarian and clientelistic logic governing the power system in Lebanon — the antithesis of good governance.

For example, the management of some $40 million that Lebanon received from the sale of seismic data to oil companies remains highly opaque.

Unlike oil, gas depends on a very complex industrial, financial and legal process.

The Lebanese state has a number of industrial, legal, financial, and administrative challenges to overcome, regardless of the border demarcation.

The appetite of investors is very closely linked to the perception of country risk, starting with its ability to issue any license.

It is true that oil exploration will be accompanied by investments, but the bulk will go to the acquisition of equipment and services that Lebanon does not provide.

A whole process of technology and skills transfer is necessary but requires a national strategy defined by a determined state. We are far from it.

From an economic point of view, the only reasonable path is to rely upon, in the long run, gas to supply part of the electricity production of a sector also based on renewable energies in order to provide power at the best price to the Lebanese.

By the very admission of the main stakeholders concerned with the maritime agreement, many mistakes have been made over the years. But no one is prepared to be held accountable, perpetuating the logic of impunity on a highly strategic issue.

We need to shed light on the management of this file. A parliamentary investigation commission offering guarantees of transparency and impartiality is an indispensable entry point.

By Sibylle Rizk, president of the Board of the Lebanese Oil and Gas Initiative (LOGI)

The relative security stability brought about by the US-mediated maritime agreement with Israel is, of course, welcomed by the Lebanese people who are exhausted from decades of violence and threats of violence designed to stifle any inclination to break communal allegiances.But this stability is the result of arrangements by political stakeholders and regional powers that go beyond the Lebanese...

See all the portfolio