The Lebanese Red Cross provides two hotlines (1760 and 71 910269) for the relatives of migrants to call for information. 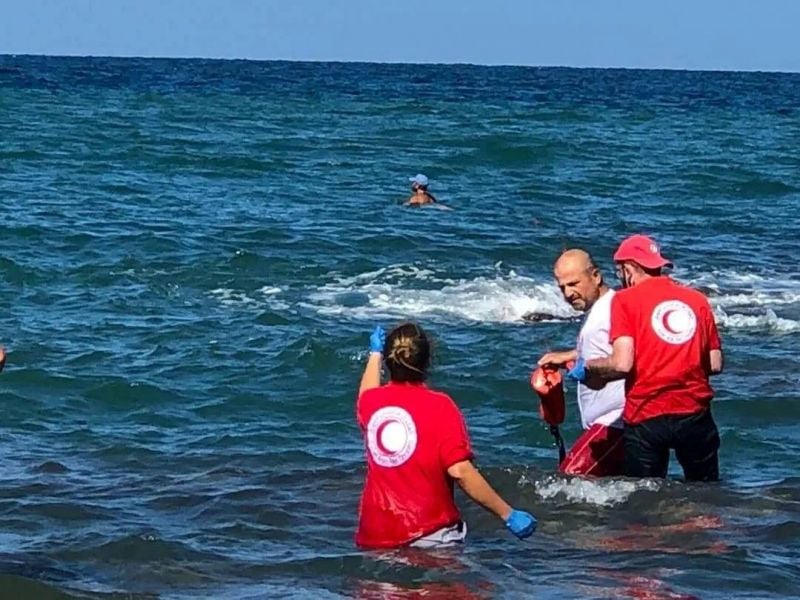 The provisional death toll from the sinking of a boat carrying migrants from Lebanon on Thursday off the Syrian port city of Tartus increased again Saturday. Six new bodies were recovered off the city, bringing the number of dead to 92, according to our correspondent in North Lebanon, quoting the director of the port of Banias, Mouafaq Ibrahim.

"There are 89 dead, and 14 people are recovering in al-Bassel hospital, including two in intensive care," Iskandar Ammar, an al-Bassel hospital official, was quoted for his part as saying by the official Syrian news agency Sana. An earlier report on Saturday put the death toll at 86, while the search for possible survivors continues, with several people still missing.

Reached by L'Orient-Le Jour, the press office of the caretaker Lebanese Minister of Public Works and Transport, Ali Hamieh, said on Saturday that the Lebanese authorities continue to coordinate with Syrian officials to follow up on the rescue operations, noting that no Lebanese rescue team has been dispatched to Syria. "The death toll is still provisional and continues to rise," the minister's office said, adding that "search operations are continuing although there is little hope of finding survivors at this stage."

According to the Syrian authorities, about 150 people, mainly Lebanese and Syrian and Palestinian refugees, were on board the small boat that sank off the coast of Tartus after leaving the Lebanese coastline off Miniyeh earlier this week.

According to our correspondent, two victims were identified early Saturday afternoon at al-Bassel hospital in Tartus. They are S. W., a Palestinian refugee from Nahr al-Bared camp (in North Lebanon) whose son is still missing, and A. A., another Palestinian refugee from the camp of Shatila (near Beirut) whose brother has not yet been found either. The families of the victims were still burying their loved ones on Saturday in Lebanon.

Mourners march with the body of one of the victims who drowned in the shipwreck of a migrant boat that sank off the Syrian coast, during his funeral after the return of his body in Lebanon's northern port city of Tripoli on Sept. 24, 2022. (Credit: Fathi al-Masri/AFP)

The Lebanese Red Cross, deployed at the Arida checkpoint on the Lebanese-Syrian border, received on Friday the bodies of seven Lebanese and two Palestinians who were identified by their relatives. Contacted by L'Orient-Le Jour, the Lebanese Red Cross's secretary-general Georges Kettaneh said on Saturday that rescue workers are still deployed in Arida to receive the remains found by the Syrian Red Crescent.

"Our teams are checking the papers of the recovered migrants before transferring them to government hospitals in Tripoli and Halba," he said, noting that other hospitals in the north are also ready to receive the victims if needed. Earlier in the day, the Lebanese Red Cross said it has made two hotlines (1760 and 71 910269) available to relatives of migrants to call for information.

For its part, the press office of Lebanese caretaker Health Minister Firass Abiad said he has contacted his Syrian counterpart, Hassan Mohammad Ghabach, to discuss the survivors' transfer to Lebanon according to their health status. He added that his ministry will take care of the treatment costs.

The Lebanese Army announced Saturday that it had arrested a suspected smuggler who allegedly organized the ill-fated boat journey. Investigations are continuing to arrest others involved, the army said.

UNICEF, the United Nations Children's Fund, said on Friday that it was "deeply saddened by the death toll on the boat that sank off the Syrian coast from Lebanon," and said that "yesterday's [Thursday's] tragedy, and those that preceded it, are stark reminders that collective action is urgently needed to prevent families from dying at sea.

The United Nations High Commissioner for Refugees, Filippo Grandi, deplored on Friday "another heartbreaking tragedy," calling on the international community to help "improve the conditions of those forced to flee their country, as well as those of the communities hosting them."

Many Lebanese migrants come from the north, especially from the city of Tripoli, which has become a hub for illegal immigration in the Mediterranean.

Following the economic collapse in Lebanon, Syrian and Palestinian refugees and Lebanese have attempted to cross the Mediterranean in makeshift boats to European countries, including the island of Cyprus, located 175 kilometers off the Lebanese coast. Last April, the sinking of an overloaded migrant boat, chased by the Lebanese navy off the coast of Tripoli, left dozens of people dead and provoked great anger in the country. On Sept. 13, the Turkish coast guard announced the death of six migrants, including two babies, and rescued 73 people trying to reach Europe, off the coast of Mugla province, in southwestern Turkey. These migrants were reportedly boarded the vessel in Tripoli.

According to the UN, at least 38 boats carrying more than 1,500 people left or attempted to leave Lebanon illegally by sea between January and November 2021.

The provisional death toll from the sinking of a boat carrying migrants from Lebanon on Thursday off the Syrian port city of Tartus increased again Saturday. Six new bodies were recovered off the city, bringing the number of dead to 92, according to our correspondent in North Lebanon, quoting the director of the port of Banias, Mouafaq Ibrahim."There are 89 dead, and 14 people are recovering in...