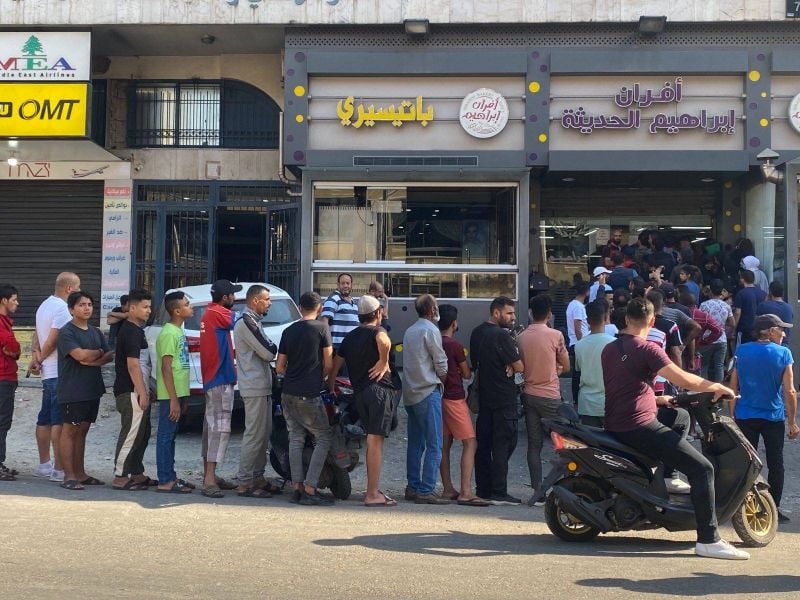 A line forms outside of a bakery in Beirut's southern suburbs on July 8, 2022. (Credit: Ghadir Hamadi/L'Orient Today)

BEIRUT — The day before the beginning of Eid al-Adha celebrations, long queues had formed at bakeries throughout the country, as State Security patrols conducted inspections amid fears of bread shortages. Meanwhile, bakery owners and public officials traded blame for the situation.

Crowds amassed ahead of the three-day holiday at bakeries in north Lebanon, which had not sold bread the day before, blaming flour shortages. Similar scenes were spotted in South Lebanon, where reports of bread stockpiling due to fears of incoming shortages incurred a heavy demand on bakeries. Even in Beirut, some people waited hours to buy a bundle of bread.

Dalia Mourtada, who was standing in line in front of one of the bakeries in Beirut’s southern suburbs Friday afternoon, told L’Orient Today that she had been standing in line “for over 40 minutes in the scorching July heat.”

She added, “I can’t believe that this is how I’m spending the eve of Adha.”

Hussein Moussawi, who was waiting in the same line, said that he had been standing for one hour.

“I need to buy a chocolate cake and two bundles of Arabic bread, since my daughter and her kids are coming home from America for Eid and my wife and I are holding a dinner for them,” he said.

Others were just glad they were able to afford bread at this point.

“If I wait in line for two hours, eventually I’ll be able to get it. This Eid I’m thinking of the hundreds and thousands across the country who will go to bed hungry,” Karim Berdawni, who was also standing in line, said.

State Security patrols had been present since Thursday throughout the country in an attempt to ensure bread production continued normally.

Arabic bread bundles have been at the heart of a dispute between bakeries and caretaker Economy Minister Amin Salam for several weeks.

Salam held a press conference Friday where he accused the dealers and wheat merchants of instigating wheat crises, saying that 45,000 tonnes of wheat entered the country last month, while Lebanon only needs 36,000 tonnes to produce Arabic bread.

“The rest has gone missing,” he said.

Salam alleged that “some bakeries and some merchants personally benefit from the subsidized wheat,” and stated that a bread black market exists across Lebanon with packages of bread sold at more than double the official price. Salam said subsidized flour intended for Arabic bread was being diverted to sweets.

“Stealing public money, hitting food security and stealing people's bread constitutes a destabilization of national security, especially in these delicate circumstances,” Salam said. “Lebanon has been facing a crisis in its wheat sector before the Russian-Ukrainian war, but the war worsened the crisis.”

In mid-June, Salam accused bakery owners of “theft” and claimed that “50 percent” of them were “thugs.”

The Federation of Bakery Syndicates told the Economy Ministry, in a press conference it held, that if the ministry did not approve authorizations for payments of flour deliveries before July 16, it would have to “take on the responsibility of supplying bread to the population.” The bakeries have also blamed the central bank for failing to pay for wheat import shipments.

MP Wael Bou Faour (PSP/Bekaa II) told L’Orient-Le Jour that he submitted his report to Financial Prosecutor Ali Ibrahim last week from sources inside the Ministry of Economy and within the private sector that “everyone is involved: the ministry, bakeries, dealers, and certain companies. The ministry serves as a sponsor of this corruption because all this could not be done without it."

Ibrahim, the prosecutor, assured L’Orient-Le Jour that he has received “the report from Wael Bou Faour last week, which I added to the whole file for that investigation, which I started three to four weeks ago, based on information from the media and reports from the ministry.”

Salam said that the country will not be able to keep the wheat subsidies for much longer as the crisis worsens, despite the partial “safety net” that will be provided by a World Bank loan to buy wheat, which will give outside dealers and incentive to sell wheat to Lebanon.

On May 6, the World Bank’s board of directors approved an emergency loan of $150 million for Lebanon to finance wheat imports, but the newly elected Parliament has yet to ratify the agreement with the World Bank.

Speaker of Parliament, Nabih Berri, assured in June that “there will be no delay” in this matter, adding that the credit line from the World Bank would make it possible to stabilize bread production for at least the next nine months.

It appears likely that an end to the wheat subsidy is looming.

In addition to $147.5 million to finance wheat purchases, the agreement also includes a $2.5 million “project management and capacity building” component, which includes consulting and technical services "to manage the gradual transition from the current wheat subsidy system to a more market-oriented system.”

When asked about this section previously, an Economy Ministry spokesperson told L’Orient Today “there is no decision to lift the subsidies,” and denied that the government had asked the World Bank for help planning subsidy removal, while a spokesperson for the World Bank also said the idea had not come from the bank.

BEIRUT — The day before the beginning of Eid al-Adha celebrations, long queues had formed at bakeries throughout the country, as State Security patrols conducted inspections amid fears of bread shortages. Meanwhile, bakery owners and public officials traded blame for the situation.Crowds amassed ahead of the three-day holiday at bakeries in north Lebanon, which had not sold bread the day...