Who will benefit from the diaspora vote?

L’Orient-Le Jour spoke to traditional parties, thawra groups and observers, on the trends emerging from the vote held abroad 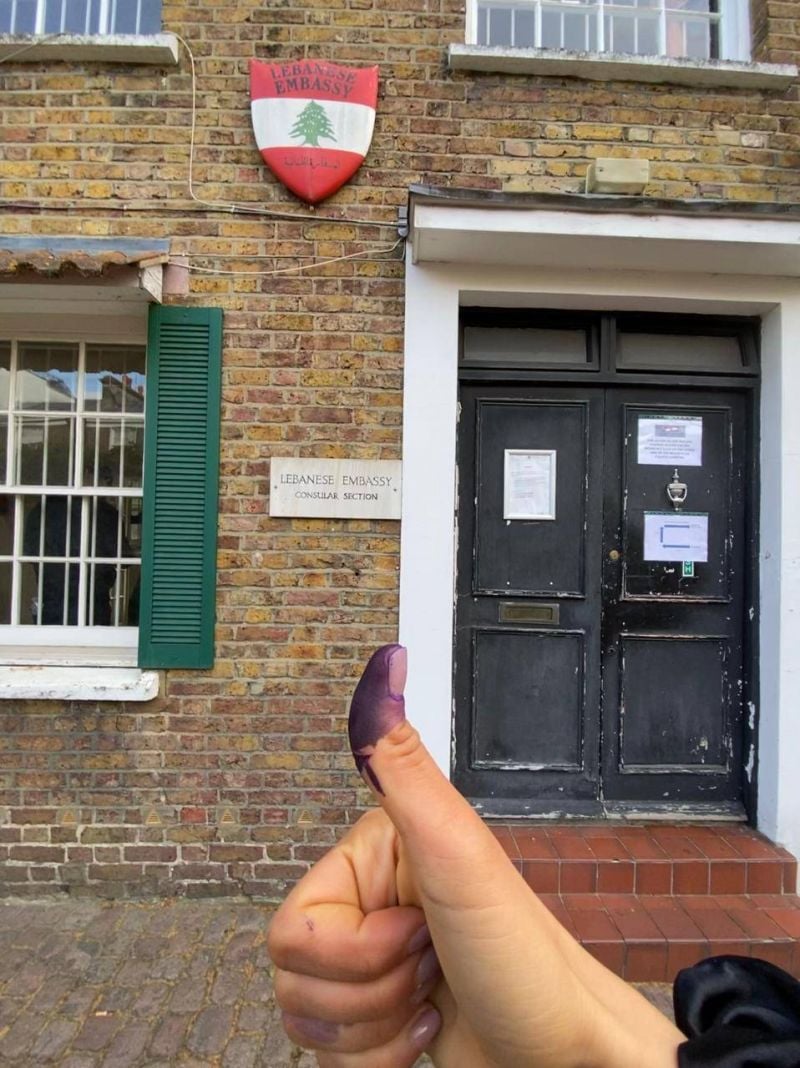 A Lebanese expat voter in London during the May 8 parliamentary elections. (Credit: Maya Sioufi)

More than 130,000 voters — that’s the number of Lebanese expatriates who cast their ballots in the parliamentary elections, according to Foreign Affairs Ministry’s estimates. It is the equivalent of 60 percent of non-residents who registered to vote in this election, which is a crucial component for the future of Lebanon.

Although the Future movement did not participate and despite the technical and logistical hurdles facing the voters,This turnout, which exceeds that of 2018 (56 percent), is even more impressive particularly since the number of registered voters increased threefold compared with the 2018 elections (225,114 registered voters in 2022 vs. 82,965 in 2018).

This first reading, in the wait for the ministry to release the final figures, identified the countries where the largest number of voters were mobilized: they consist of France, the United Arab Emirates, Australia, the United States and Canada.

More than two years after the Oct. 17, 2019 uprising against a despised ruling class, and a little less than that after the August 4 explosion that destroyed the port of Beirut and entire parts of the capital, killing more than 220 people, will this mobilization benefit the groups that advocate for change or the traditional parties and their effective electoral machines? 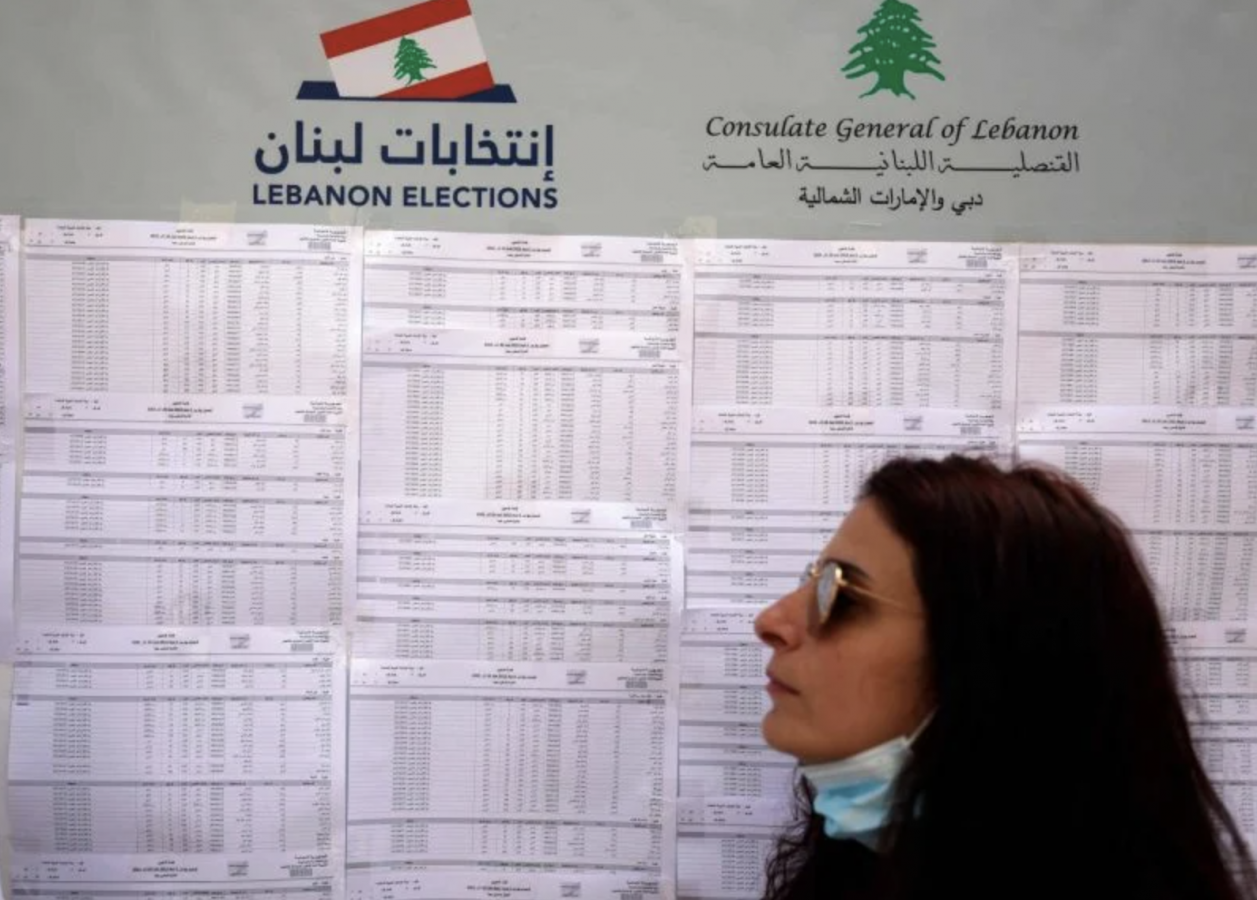 A Lebanese citizen at the Lebanese consulate in Dubai, United Arab Emirates during the May 8 parliamentary elections. (Credit: Karim Sahib/AFP)

“There is no doubt that most of those who went to the various polling stations voted for ‘change.’” said electoral expert Kamal Richa. Adding, “But this concept is far too vague and depends on each voter’s perception. Thus, while some would include traditional parties, such as the Lebanese Forces (LF), [as part of the change] others prefer a more purist approach.” The concerned parties seem to have this same observation.

Speaking to L’Orient-Le Jour, Wassim Raji, head of the LF’s electoral machine, said that he believes the diaspora vote benefits Samir Geagea’s party. “Our figures show that we have achieved good scores in Australia, the United States and the United Arab Emirates,” he said, without sharing these figures.

The LF’s lead was also noted by thee electoral machine of Michel Moawad, reformist candidate in the Northern III constituency (Batroun, Koura, Bcharre, Zgharta), who was counting mainly on the vote in Australia.

“In our constituency, we benefited from the diaspora vote, especially in Zgharta district, where Michel Moawad easily stood out from other candidates. According to our estimates and those of the various electoral machines, he would be well in the lead after the vote of the Lebanese abroad,” said a member of Moawad’s electoral machine, without providing figures.

He however added, “The LF were very well-organized and did everything to mobilize the electorate in their favor.”

As for Sami Gemayel’s Kataeb, Ralph Sahyoun, head of their electoral machine, said that “the atmosphere generated from the expatriate vote was very positive for the party,” without revealing any figures.

However, the protest movement’s groups said that when it comes to the diaspora voters, especially in the United Arab Emirates (where an estimated 18,000 Lebanese voted, or more than 70 percent of the registered voters), it was mainly the thawra that did extremely well.

“Exit polls gave clear indication that voters in Dubai mostly voted for the protest movement’s candidates in Mount Lebanon, such as Najat Aoun Saliba and Marc Daou in Chouf-Aley and Michel Helou in Baabda,” a candidate close to the protest movement told L’Orient-Le Jour.

Even the LF acknowledged implicitly an advantage to the thawra in the United Arab Emirates.

“We are happy with our score in Dubai. But that doesn’t necessarily mean that we came first,” Raji said.

On the Sunni side, the low turnout in Saudi Arabia could mean a poor mobilization. Indeed, only about 49 percent of registered voters cast their ballots, compared with 57 percent in 2018 in this country where 56 percent of the electorate is Sunni.

According to some observers, the lowest turnout in Saudi Arabia was recorded in the (predominantly Sunni majority) Beirut II, Tripoli, Saida and Akkar constituencies. “This indicates that the pro-Hariri electorate partially respected [the decision of] Sunni leader Saad Hariri and his Future Movement to boycott the election and the implicit order given to the blue party’s supporters not to take part in this election,” said Richa.

This is bad news for several Sunni figures, mainly for former Prime Minister Fouad Siniora, who wished to fill the vacuum Hariri left behind, by approaching the Sunni electorate, especially the Future Movement’s supporters.

Although Saudi Arabia backed these figures’ efforts, as well as Grand Mufti Abdel-Latif Derian who recently multiplied calls for the Sunnis to vote massively, they seem far from having won the bet.

What is certain, however, is that the diaspora vote has put the current [parliamentary] majority at a disadvantage, Richa said. “Most of the voters came to cast a protest vote,” the analyst said. Within the Free Patriotic Movement, President Michel Aoun’s party, they had a more nuanced opinion.

“Certainly, we do not have the same means as our opponents, but we believe that no one will really win in the expatriate vote. The votes will be distributed evenly among the various protagonists,” said Sayed Younes, head of the FPM electoral machine.

Hezbollah, the FPM’s biggest ally, considers itself to be in the least favorable position.

“Hezbollah is labelled as terrorist by many of the countries where the elections were held. Not only does this prevent the party from campaigning fairly, but it also puts pressure on voters, who know well that voting for Hezbollah can have serious repercussions on their professional careers,” said Faysal Abdel Sater, an analyst close to Hezbollah.

For him, this “unfair competition” could lead to unfavorable results for Hezbollah in the countries where there are the most registered voters. In Syria and Iran, two countries that together with Hezbollah form the “axis of resistance,” the turnout was particularly high, even if the number of registered voters is low.

“But in the end, this matters little. Although some 130,000 expatriates voted, their influence will be watered down since they will be spread over the country’s 15 electoral districts,” said Abdel Sater.

More than 130,000 voters — that’s the number of Lebanese expatriates who cast their ballots in the parliamentary elections, according to Foreign Affairs Ministry’s estimates. It is the equivalent of 60 percent of non-residents who registered to vote in this election, which is a crucial component for the future of Lebanon.Although the Future movement did not participate and despite the...