Activity in the agricultural sector increased by 40 percent in 2020, a year in which the economic crisis accelerated 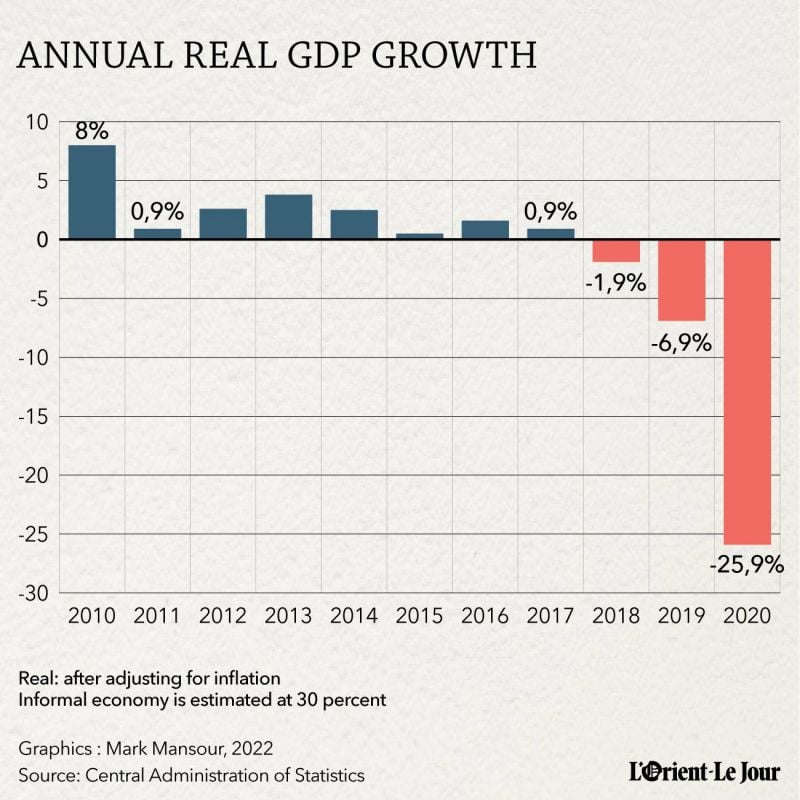 The Central Administration of Statistics, which is affiliated with the premiership and is supposed to publish the country’s socioeconomic indicators (inflation, poverty, etc.), recently released official GDP figures for 2020, showing a 25.9 percent decrease year-on-year.

This update confirms that the economy stalled in a year that was marked by an accelerating crisis, the first lockdowns linked to the COVID-19 pandemic and the Aug. 4 Beirut port explosion. It also brings the CAS a little closer to redressing delays in publishing national accounts.

“We are now only about a quarter behind our normal publication schedule,” said a CAS senior official. “Normally, we would have published the figures for the first quarter of 2021 towards the end of March,” he added.

This is more or less the same publication schedule of national accounts by France’s National Institute of Statistics and Economic Studies (INSEE). However, provisional estimates are published in the months following the year in question prior to the publication of the accounts in full.

In terms of methodology, the CAS said it used a weighted average exchange rate of LL3,878 to the US dollar to reflect the accelerating lira devaluation over the course of the year. The lira fell from LL2,000 to the dollar at the beginning of the fiscal year, to nearly LL9,000 at the end of the year, with significant fluctuations in the interim.

The statisticians also warned that the figures used as a basis for their calculations are “uncertain” and “imprecise,” given the precarious situation in the country in 2020 and the lack of data on production costs, consumer spending and the volume of transactions with foreign countries.

Finally, they indicated that the figures can be adjusted later if new data becomes available. The CAS calculates Lebanon’s GDP using VAT data from 40,000 firms and the price index it publishes each month.

The CAS assumed that the informal sector, which, according to estimates from the report, accounts for 30 percent of GDP, follows the same pattern as the formal economy. 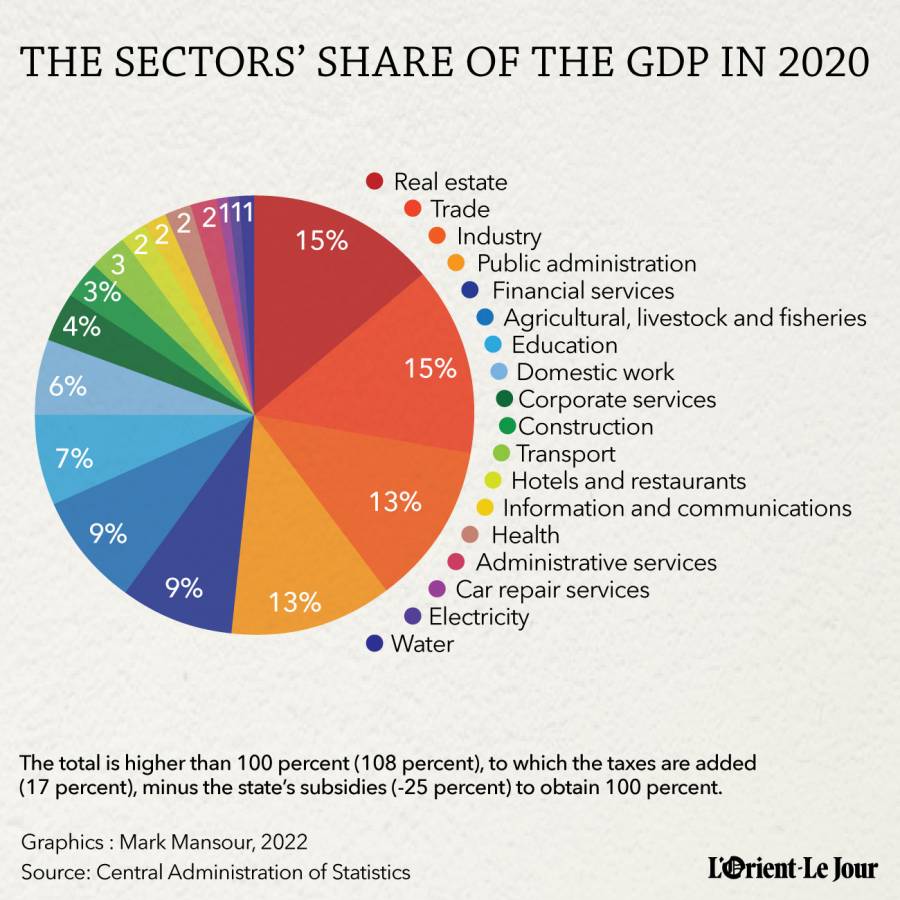 In detail, household consumption, which contributes most to the country’s GDP, contracted by 27 percent, while government spending increased by 5 percent. Investment, which contributes to future growth, plunged by 63 percent. Exports of goods and services both fell, by 18 and 46 percent, respectively. Imports of goods and services also fell, by 27 percent and 51 percent, respectively. 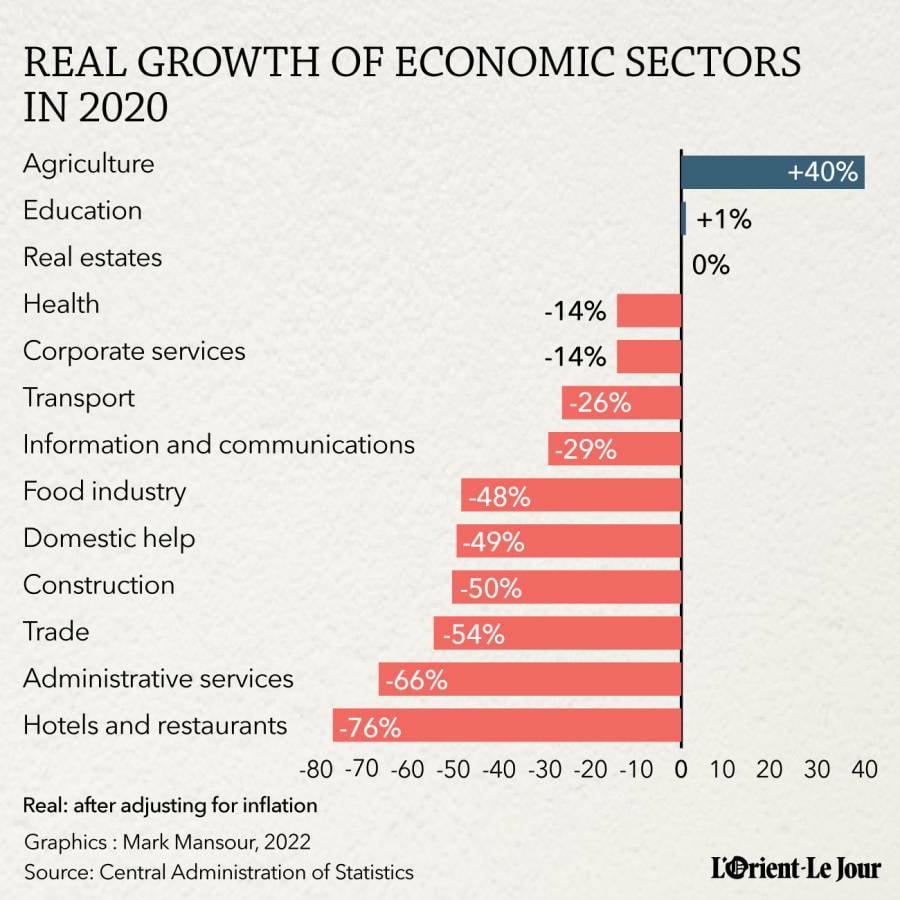 Meanwhile, the financial sector, especially the Lebanese banks which were considered the backbone of the Lebanese economy, in 2020 contributed 9 percent of GDP, the same as the agricultural, livestock and fisheries sector; education followed contributing 7 percent, then domestic help (6 percent), corporate services (4 percent), construction (3 percent), transport (3 percent), hotels and restaurants, health, information and communication, administrative services (all 2 percent each), and finally car repair services, electricity and water (1 percent each).

Together, these sectors contributed to 108 percent of the GDP. The administration added to this total the tax sector’s contribution which amounts to 17 percent, and then removed the negative effect of subsidies on national GDP, estimated at -25 percent.

Starting in October 2019 and throughout 2020, Banque du Liban subsidized imports of essential goods (wheat, fuel and medicine) at the official rate of LL1,507.5 to the US dollar. The government expanded this program from May 2020 to food and raw materials for industry and agriculture.

The subsidies programs were phased out in 2021, due to the decline in BDL’s foreign reserves. 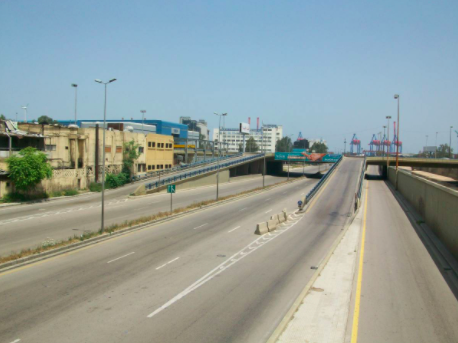 The streets were empty during the first lockdown in spring 2020. (Credit: MA)

The agricultural sector is one of the few sectors to have experienced growth in 2020. This is because many Lebanese returned to the agricultural sector, especially following the layoffs (the World Bank estimated the unemployment rate at 40 percent by the end of 2020) linked to the closure of many businesses due to the crisis and the pandemic.

All these figures reflect the slowdown which is due to the economic and financial crisis that broke out in 2019 (although it dates back to 2018, according to the CAS), the lockdowns to combat COVID-19 in 2020, the Beirut port blast that ravaged large swathes of the capital, the resignation of Hassan Diab’s government in its aftermath leading to a yearlong political vacuum, and the failure of the negotiations with the IMF, which Lebanon had asked for financial assistance.

The Central Administration of Statistics, which is affiliated with the premiership and is supposed to publish the country’s socioeconomic indicators (inflation, poverty, etc.), recently released official GDP figures for 2020, showing a 25.9 percent decrease year-on-year.This update confirms that the economy stalled in a year that was marked by an accelerating crisis, the first lockdowns linked...