Parliamentary majority at the heart of the legislative battle

Hezbollah wants to maintain the advantage it has in Parliament; the opposing camp is trying to prevent that from happening 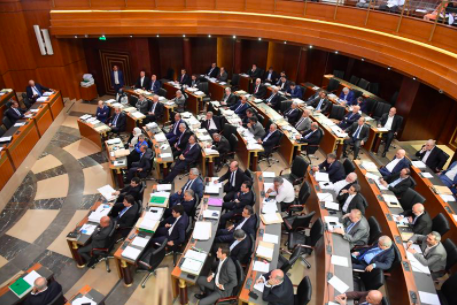 The situation resembles that in 2009. That year, the June legislative elections were held more than a year after armed Hezbollah members invaded Beirut and the mountains of the Chouf district on May 7, 2008.

The confrontation between the March 14 and March 8 camps was at its peak. The former had won. Today, less than two months ahead of the legislative elections, political polarization is once again in full swing, particularly on the issue of Hezbollah’s weapons.

The confrontation between the party — which compares the ballot to a “second July war,” referring to the 2006 war with Israel — and its allies on the one hand, and the political parties that are hostile to Hezbollah, especially the Lebanese Forces (LF) — which speak of a “war of political liberation” in May — on the other hand, is not going to be easy.

At the heart of the battle, there is something that all protagonists perceive as crucial: the majority in the next Parliament.

For Hezbollah, the objective is clear: to preserve the majority it had obtained with its allies, in particular Amal and the Free Patriotic Movement, in the 2018 elections.

“We must support our allies so that the parliamentary majority remains in our hands,” Hassan Nasrallah said bluntly in a meeting last week with his party’s electoral campaign officials.

“The battle is political. Our adversaries want to obtain a majority to normalize relations between Lebanon and Israel,” said the head of Hezbollah’s parliamentary bloc a few days later.

These remarks clearly illustrate the pro-Iran party’s concerns, particularly since the 2022 elections are perceived by a segment of the public, as well as by the international community, as an indispensable step for change in a country that has been sinking in a complete economic and financial meltdown since 2019.

The elections are thus perceived as an opportunity to institutionalize the Oct. 17 protest movement, and perhaps to change the balance of power in Parliament.

“While Hezbollah has managed to mitigate the crisis’ effects on its popular base by setting up an active electoral clientelism machine, the same does not apply to all the other parties, including its allies such as the FPM, whose popularity has sharply declined, which threatens the current majority,” elections expert Assem Chaaya said.

However, after the Doha agreement, a parliamentary majority in Lebanon is no longer a guarantee for one camp to govern the country alone. The agreement inked in May 2008 in the Qatari capital had put an end to an unprecedented political and institutional crisis, and established the return to dialogue and to consensus as a substitute for confrontation.

“Look at Michel Aoun, after being elected president thanks to a settlement with the Future Movement and the LF, he opted for a confrontation and went so far as to alienate his partners. The result: he could not govern, despite the (FPM-Hezbollah-Amal) majority in Parliament,” a political critic of the head of state from another political party said.

The pro-Hezbollah majority has been increasingly fragile due to the fact that its members are heterogeneous, and even fierce political adversaries. This is particularly the case with the FPM and Nabih Berri’s Amal movement.

The latter had not voted for Aoun in the presidential elections, unlike Hezbollah, whose favorite candidate was the former general.

It is from this perspective at the end of the 2018 legislative elections that Mohammad Raad, the head of Hezbollah’s parliamentary group, said there was no real majority in Lebanon, and that the different parties are aligned on some issues, but not on others. “We are facing à la carte majorities,” he said.

While the party seems on track to preserve its parliamentary seats, the FPM is not.

“Hezbollah is aware that the Aounist movement is declining, and will react. The party is able to grant its allies electoral quotients and preferential votes. It will surely do it to defend national interests,” Faysal Abdel Sater, an analyst close to the party, said.

“For Hezbollah, the most important thing is not to secure a majority, it is mainly to prevent the henchmen of Western countries from having it,” he added.

On Monday, the chairman of Hezbollah’s political council, Ibrahim Amin al-Sayyed, even compared voting in the coming elections to a religious duty.

“We must be resistance fighters in the elections, which have turned into a war against the resistance,” he said.

It is in order to win this “war” that the pro-Iran party has forced its two allies, Amal and the FPM, to overcome their animosity and join forces in several electoral districts, such as Baabda and the west Bekaa Valley.

“These are not political alliances, they are only a merger of votes necessary to obtain a certain number of seats,” Gebran Bassil said a few days ago, in a bid to justify this choice in front of FPM members.

Hezbollah could also take advantage of the absence of Saad Hariri’s Future Movement, which will leave a large political void in the Sunni areas. This void, which risks considerably reducing the electoral threshold in case the Sunni electorate does not vote, could be to the advantage of the pro-Syria Sunni figures close to Hezbollah, such as the Ahbash in Beirut or Sunni MP for Tripoli Faisal Karami, which could compensate for the FPM’s potential losses.

In the face of this threat, former Prime Minister Fouad Siniora, who is leading efforts in Beirut II and other electoral districts with the aim of preventing the vacuum on the Sunni scene from serving the pro-Hezbollah figures, recently told the press that the “sovereignist camp must have a third of the MPs at all costs.”

That is to say: a blocking third.

Before Aoun’s arrival to Baabda, Hezbollah and the FPM had succeeded in blocking the election of a new head of state for two years; without, however, having a parliamentary majority. They simply refrained from attending 45 sessions held for this purpose and caused a lack of quorum.

“Of course, the LF and their allies aim to obtain a parliamentary majority, which is the only constitutional means to launch a real project for change,” Wissam Raji, an official at Samir Geagea’s party and who is closely following the elections file, said.

Nevertheless, it is a difficult challenge to overcome, especially when abstention rate in the Sunni electoral districts seems to be high, which would benefit Hezbollah.

However, if the reformist camp that is close to the protest movement manages to run in the elections in unified lists, it would also be able to take advantage of the low electoral threshold, and subsequently take seats out from the current majority.

The situation resembles that in 2009. That year, the June legislative elections were held more than a year after armed Hezbollah members invaded Beirut and the mountains of the Chouf district on May 7, 2008.The confrontation between the March 14 and March 8 camps was at its peak. The former had won. Today, less than two months ahead of the legislative elections, political polarization is once...