‘I won't resign, but…’ Mikati rants 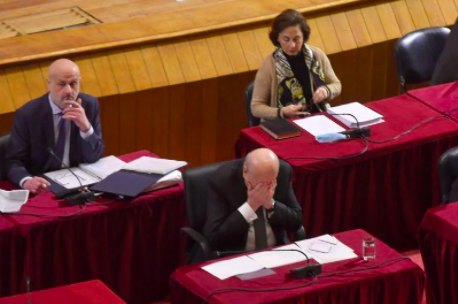 Najib Mikati is ranting, and this is quite unlike him. For the first time since the formation of his cabinet, the prime minister, who is known for rounding the edges, decided to step forward. “I will not be dragged into resigning,” he said yesterday, thus alluding to this possibility for the first time.

Mikati wanted to sound the alarm with these remarks. His message was mainly addressed to the MPs attending the plenary session of Parliament yesterday: political disagreements for selfish purposes less than two months ahead of the legislative elections are jeopardizing the ballot, but the cabinet will do everything to carry out this task successfully. A resignation would “obstruct the legislative elections,” Mikati stated in televised remarks on the sidelines of the session.

“This is a good reason for not resigning,” he added. What angered him? The differences over the capital control draft law and criticism leveled at his team over its proposal, especially by parliamentary committees. That is because at a time when Mikati wants to establish himself at the center of the agreement between Lebanon and the International Monetary Fund, the draft law, which is an important reform demanded by the IMF, was removed from the agenda of the parliamentary session.

To the surprise of the assembly and its speaker, Mikati called for turning the session into a general debate. He even went so far as to pave the way for a possible withdrawal of confidence on his team, which he was granted in September. Parliament Speaker Nabih Berri quickly rejected this request. “This is a legislative session. You are the only one to make this request, and it has not been transmitted to me,” he said.

The day before, the capital control bill had been dealt the first blow. The document, several draft versions of which were leaked to the press in recent days, was strongly criticized by several institutional and civil society actors.

The parliamentary committees — the Finance and Budget committee chaired by MP Ibrahim Kanaan (Free Patriotic Movement/Metn), and the Administration and Law Committee, chaired by MP Georges Adwan (Lebanese Forces/Chouf) — both rejected the latest version for “flaws” in both the form and content. The text submitted by Nicolas Nahas, an MP close to Mikati, was therefore vetoed by several political groups that champion the cause of depositors worried about their savings held up in Lebanese banks.

“I openly opposed this version which was presented as a capital control bill, but is not,” Adwan told L'Orient-Le Jour. “We cannot approve a law that would legalize a seizure of the rest of the depositors’ savings,” Adwan added.

“I expressed this position and I spoke in favor of a rescue plan in due form that the government would develop. Otherwise, a vote of no confidence in Mikati’s team must be seriously considered,” he said, acknowledging that the prime minister reacted to these remarks in Parliament.

On the Aounist side, it is almost the same argument. “The committees did not examine a capital control bill, but rather a proposal to freeze capital for five years,” Kanaan said.

The FPM and the LF are not the only ones to be hostile to the capital control bill. There is also, Hezbollah, which was one of the first parties to reject any agreement with the IMF. On Sunday, the day before the joint committee meeting, the party had already set the tone, through the Jaafarite mufti, Sheikh Ahmad Kabalan. In a statement, the mufti warned against “any illegitimate capital control draft law, with the aim of protecting the banks’ mafia and legalizing hollowing out the people's savings. And to hell with the IMF.”

“It is unacceptable to describe this draft law as illegitimate, this is not at all the case,” a senior government source told L'Orient-Le Jour. “Mikati's remarks were mainly designed to send a clear message to all protagonists: he will not be responsible for a possible torpedoing of the ongoing negotiations with the IMF, a new round of which are scheduled for Thursday at 8 a.m.,” the source added.

“Mikati does not want to resign. He is upset that Parliament did not pass the capital control draft law,” a ministerial source told L'Orient-Le Jour. Mikati also ruled out the possibility of any resignation less than two months ahead of the legislative elections. “The prime minister wanted to block any electoral one-upmanship that several political parties have been engaged in during the debates on this reform,” said Ali Darwish, a Tripoli MP close to Mikati.

All eyes are focused now on Baabda, where the cabinet will meet this afternoon at 4:00 p.m., to discuss the capital control draft law, as Mikati said after the parliamentary session. “Parliament requested that [the cabinet] incorporate the IMF’s remarks into the text. We were then asked to submit a [different] version of the draft law. And this is what will happen,” he said.

However, Deputy Prime Minister Saade Chami, who chairs the Lebanese delegation negotiating with the IMF, told L'Orient-Le Jour that the cabinet will not prepare a new version of the draft law, “particularly since the parliamentarians who met on Monday did not examine the draft on the merits, but rather they made reservations on the form,” he said. However, Chami did not rule out the possibility of adding changes to the draft, whose “drafting was fully coordinated with the IMF.

Mikati's fury over the internal tug-of-war over his team's work comes at a time when he has received unequivocal Arab support, particularly from the Gulf monarchies, which have paved the way for a thaw with Beirut.

Mikati, who visited Qatar last weekend, also condemned the fact that a political tug-of-war is occurring at a time when “the world countries [its] expressed readiness to help Lebanon.”

It is in this vein that reports that the Lebanese dossier was on the agenda of French Foreign Minister Jean-Yves Le Drian’s visit to Qatar and Kuwait. “France especially wants to expand the spectrum of contributions to the Saudi-French monetary fund decided [on] at the Jeddah summit between President Emmanuel Macron and Saudi Crown Prince Mohammad bin Salman on Dec. 4, 2021,” said a Lebanese diplomat in Paris, who ruled out the possibility of any new French initiative regarding Lebanon before the legislative elections.

Najib Mikati is ranting, and this is quite unlike him. For the first time since the formation of his cabinet, the prime minister, who is known for rounding the edges, decided to step forward. “I will not be dragged into resigning,” he said yesterday, thus alluding to this possibility for the first time.Mikati wanted to sound the alarm with these remarks. His message was mainly addressed to...