As deadline for electoral alliances looms, ambiguity prevails over the formation of lists

Sunni mobilization and the unity of the “forces of change,” or political figures that emerged from the Oct. 17, 2019, protest movement, will be crucial leading up to the day the deadline for setting up electoral alliances expires. 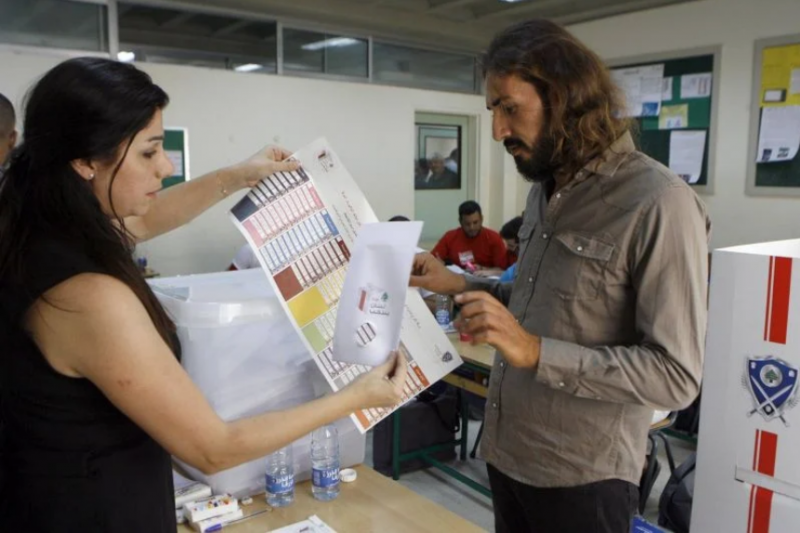 A voter at a polling station in Beirut during the 2018 legislative elections. (Credit: Marwan Assaf)

There are 10 days remaining for the 1,043 candidates running in the May 15 legislative elections to submit their electoral lists.

Although the deadline is approaching, very few lists have been announced so far. Among those that have are the lists of incumbent MP Michel Daher in Bekaa I (Zahle); Chamalouna in North III (Batroun, Bcharre, Koura, Zghorta); and the list of the Amal Movement in South I (Saida-Jezzine).

While the election day, seen by a portion of the public as being decisive for the future of the country, is drawing nearer, this persistent ambiguity creates a state of uncertainty, reflecting the prevailing political instability.

Question marks are hanging over two main issues: the protest movement figures, which are waging their first real political battle in the wake of the October 2019 uprising, and the Sunni street after the withdrawal of Future Movement leader Saad Hariri from political life.

Since the eligibility threshold percentage as per the electoral law (the total number of voters divided by the number of seats to be filled in a district) is high, ranging from 7.7 per cent to 20 per cent, it is crucial for the protest movement candidates to unify their forces on a single list to be able to have an influential opposition parliamentary bloc after the vote.

For the moment, however, only one opposition list has been announced, that of Chamalouna in North III, which includes candidates from various protest groups.

This list is separate from that of Michel Moawad and the Kataeb party, which will form their own list with other figures from the thawra or revolution.

In other districts, however, vagueness persists.

In Beirut II, where Hariri's absence may significantly lower the electoral threshold, efforts are underway to unify lists.

“We will make an announcement on this very soon,” said Nahida Khalil, candidate of the Madinati group for one of the two Shiite seats in Beirut II.

“Like all the others, I remain a potential candidate. We are in discussions to form a unified list, even if it means the withdrawal of some candidates according to a standardized procedure,” explained Khalil.

She added that discussions are underway to choose two Shiite candidates from among the various opposition figures who have come forward (the two Shiite seats in the capital are contested by 17 candidates).

Similarly, in Beirut I, discussions between the Watani group of incumbent MP Paula Yaacoubian and the Madinati group are underway to form a unified list.

In Mount Lebanon IV (Chouf, Aley), where the electoral threshold in percentage terms is the lowest in the country (7.7 percent), opposition groups also have an interest in uniting. In 2018, civil society groups had split into two lists in this constituency, with neither being able to get a member elected.

“We are working to unify the figures of the thawra camp in a list that would be able to get 15 percent of the vote, or at least two seats,” said Marc Daou, a founding member of the opposition movement Taqaddom, who is also a candidate in Aley.

“We presented a serious lineup to the other opposition groups, but Li Haqqi and Ghada Eid refused it without explaining the reasons,” he said.

When contacted, an activist from Aley el-Taghyir, a coalition of opposition movements including Li Haqqi, said otherwise.

“We want candidates to be selected through a participatory protocol and fixed standards. The lineup that was presented to us bypassed these conditions,” he said, while insisting on the need to maintain dialogue in order to reach a common list.

This is not the only disagreement preventing the formation of a united opposition list.

The opposition group Citizens in a State (MMFD) of former minister Charbel Nahas also appears to be moving toward forming separate lists in the country's 15 electoral districts.

The objective, according to MMFD, is not to elect deputies, but to achieve significant results at the national level, which would give it popular legitimacy, allowing it to form an alternative secular parliament.

Several gray areas also remain in the Sunni-majority constituencies due to the absence of Hariri and his political party.

In Beirut II, Hariri’s “Future for Beirut” list obtained 62,970 votes in 2018 (some 44 percent of the total), which allowed it to win six of the 11 seats (compared to four seats for Hezbollah and its allies, and one seat for Fouad Makhzoumi).

Without this Beirut heavyweight, the political structure in the west of the capital could be completely turned upside down, especially if many of its more than 60,000 voters choose to abstain.

A lack of mobilization of the Hariri electorate in Beirut II would result in a drop in the electoral threshold. For instance, if, in 2018, the threshold was 13,076 votes, it would have stood at only 7,351 votes, excluding the Hariri list votes.

While lowering the electoral threshold may slightly benefit the smaller opposition parties, it is mainly Hezbollah and its allies in Beirut (particularly the pro-Syrian Sunni figures) that would be more likely to take advantage of this electoral vacuum, due to the traditionally strong mobilization of their electorate.

Siniora, who is not running in the race himself, wants to support a list of independents in Beirut II.

“In principle, I will be a candidate on the list supported by Siniora, especially since I share his sovereignist stance, which is always in the direction of state-building,” said Lina Tannir, an activist and research professor of finance at the American University of Beirut.

“Of course, I will maintain my political independence, which is very dear to me,” she added. The list supported by Siniora should be announced “very soon,” according to Tannir.

It is not only in Beirut that former Harirists are preparing to announce lists.

In the North II district (Tripoli, Minieh, Dennieh), Mustafa Alloush, former vice-president of the Future Movement, is forming a list in a bid to join the efforts led by Siniora.

The list should also include Sami Fatfat (who is part of the Haririst bloc in the outgoing Parliament), but an alliance with the Lebanese Forces of Samir Geagea remains for the moment ruled out.

“Mr. Siniora is cooperating with three lists in North II: the list in which I am a candidate, a list formed by people close to Prime Minister Najib Mikati and a list of former minister Ashraf Rifi in alliance with the LF. Our goal is to prevent the list of Hezbollah and its allies from having more than two deputies,” Alloush told L'Orient-Le Jour.

If these three lists have a common objective, why don't they unite?

“For us in Tripoli, neither the LF nor Ashraf Rifi are well regarded,” said Alloush, whose list should be announced in a few days.

Relations between the LF and the Future Movement have strained since Hariri's “fake” resignation in 2017 from Riyadh.

Members and supporters of the Future Movement accuse Geagea of ​​being disloyal to his Sunni ally. The alliance between former candidates of the two parties would therefore be complicated.

This article was originally published in English in L'Orient-Le Jour.

There are 10 days remaining for the 1,043 candidates running in the May 15 legislative elections to submit their electoral lists.Although the deadline is approaching, very few lists have been announced so far. Among those that have are the lists of incumbent MP Michel Daher in Bekaa I (Zahle); Chamalouna in North III (Batroun, Bcharre, Koura, Zghorta); and the list of the Amal Movement in South...