The Economy and Trade Minister told L'Orient-Le Jour that there is no need for alarm, and that his team is already examining alternative solutions to Russian and Ukrainian wheat, while preparing for the possibility of a lifting of central bank subsidies on imports of this essential commodity. 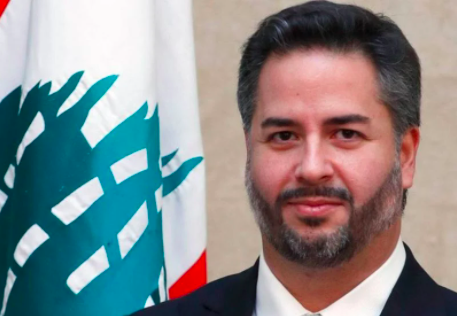 Two months. That's how long Lebanon can last with its current reserves of wheat, vegetable oil and sugar. There is no need to panic, however, according to the Economy and Trade Minister Amin Salam, who claims to have been closely and constantly monitoring the issue of the country's food security since his appointment. The minister, therefore, wants to be reassuring, while all the alarm bells have been sounded here and there since the beginning of the Russian invasion of Ukraine on Feb. 24. Lebanon has been importing almost all of its wheat for years from these two countries, which are now in an armed confrontation.

On Tuesday, L'Orient-Le Jour met with Salam to take a quick look at this issue. He is nevertheless preparing to face the challenge of food security in the next "4 to 6 months,” when the consequences of inflation on international markets will impact supply and logistical of shipments arriving in a Lebanon that has been in economic and financial crisis for more than two and a half years.

Accompanied by his counterpart in agriculture, Minster Abbas Hajj Hassan, the minister was to present his proposals yesterday during the cabinet session at the Grand Serail. At the end of the meeting, however, Information Minister Ziad Makari announced that this issue will be discussed today during a new meeting scheduled for the afternoon, in the presence of unions and other players in the sector.

OLJ: Where are we now and what are the alternatives to Russian and Ukrainian wheat?

Economy and Trade Minister Amin Salam: For about four months, so before the Russian-Ukrainian crisis, we have been working on the issue of food security in Lebanon, and in particular on two of its main challenges: Lebanon's wheat reserves and the impact of inflation on world import prices.

First, the wheat reserves, after the destruction of the [grain] silos at the port of Beirut during the double explosion of Aug. 4, 2020. These silos [with a capacity of 120,000 tons] contained three months of reserves in addition to the 50,000 tons of wheat consumed per month in Lebanon. History has shown us that we cannot have a single storage location and that is why we are studying the possibility of building silos in two or even three locations. Among these, the Bekaa Valley and the Port of Tripoli, for which the European Union and the European Bank for Reconstruction and Development have already submitted several proposals to us which are currently under study. This will allow us, perhaps within a year, to start building these wheat storage spaces.

Then, the economic crisis in Lebanon has, by default, impacted the food security of the country and its inhabitants, whose purchasing power has fallen sharply in the face of rising prices [the rate of inflation at the end of February for food and non-alcoholic beverage prices was 396 percent year-on-year, according to the Central Statistics Administration] and overall inflation due to the Covid-19 pandemic. Following the suspension of wheat imports from Ukraine and Russia, we turned to alternative markets, such as India, Kazakhstan, the United States, Canada, Australia, Argentina and certain European countries.

So far, the most concrete discussions we have had are with these first three. India must also send us its offer within 24 hours [yesterday]. These countries have additional reserves beyond their own reserves. India thus has more than 20 million tons, while Lebanon only consumes a maximum of 650,000 tons of wheat per year for a population of about 6 million people, Lebanese citizens and refugees included. Most of these countries, therefore, reassured us of the low probability of arriving at a shortage of wheat in Lebanon in view of this minimal quantity compared to other countries, such as Egypt.

In addition, our objective is to target the cheapest possible markets to avoid any excessive tariffs which would affect the purchasing power of local consumers. Fortunately, most of the aforementioned countries also have reserves in the region. In other words, if we were to import wheat from the United States, the shipments would come from neighboring locations in the Middle East or around the Mediterranean, and not from across the ocean, logically reducing costs and time of delivery. These new trade partnerships are also being studied to last in the long term, and not as a temporary aid while waiting for a resumption of Russian-Ukrainian imports.

OLJ: Banque du Liban subsidizes wheat imports according to a ratio of 100 percent, despite the dwindling of foreign exchange reserves (recently estimated at 14 billion dollars). These wheat subsidies are the last in effect. Until when can BDL hold out and what solutions can the ministry provide to ensure that it does not re-live a scenario similar to that which followed the lifting of fuel subsidies, namely a situation of acute rationing?

Amin Salam: At the moment, the government has approved the purchase by the Economy Ministry of an additional reserve of 50,000 tons of wheat. This step should be finalized in the coming weeks, and these reserves, in addition to those of importers who store them in their flour mills, will thus cover any risk of shortage in the short term if this problem should occur. That being said, BDL will not be able to continue its subsidy mechanism forever. To avoid a scenario similar to that of fuel, we need to work on a system to lift them gradually. This is why we are in discussion with the World Bank to establish a six-month program to secure the financing of imports of essential foodstuffs, including wheat, through the reallocation of loans to Lebanon from this institution for other projects that have not yet been started.

Thanks to this support and in addition to the social programs already in place on the ground [such as the ESSN program for emergency social security], we will be able to cover the impact of lifting of subsidies on wheat.

All these projects are on the table to prepare Lebanon for the challenge of supplying and financing its food security, which should arrive in four to six months, depending on internal and external factors. Indeed, questions are for the moment in abeyance, and their answers will depend in particular on the evolution of the Russian-Ukrainian situation. For example, between now and summer, will international provisions still be available and in what quantities? Will import prices be the same or how will they have evolved? The current inflation is global and has influenced in particular the cost of hydrocarbons which impacts the entire logistics chain. Our main concern is therefore to prepare contingency plans in the event of problems of this type, since none had already been put in place by previous governments. Despite our internal preparations, it is nevertheless clear that the government and the private sector will need international assistance to face this looming challenge.

Two months. That's how long Lebanon can last with its current reserves of wheat, vegetable oil and sugar. There is no need to panic, however, according to the Economy and Trade Minister Amin Salam, who claims to have been closely and constantly monitoring the issue of the country's food security since his appointment. The minister, therefore, wants to be reassuring, while all the alarm bells...